The other person who is mad at Spencer today is Mona Vanderwaal. She bumps into Spencer at the Rosewood Grille and lights into her about leaking the Yvonne thing. When the IT team went digging into the server, they also discovered that Caleb had been crawling around in there via Yvonne’s iPhone which Mona told her to “accidentally” leave at the restaurant to bait Spencer into stealing it. And now Mona’s out of a job! Honestly, it’s not that big of a deal; she did rise from the dead after three days, just a few years ago, and getting a gig on the Hill is cake compared to getting immortal. It’s honestly just the principal of the thing. Spencer can’t decide if this is all one of those convoluted Mona ploys that she pulls for fun when she’s waiting for new levels of Candy Crush to be released. 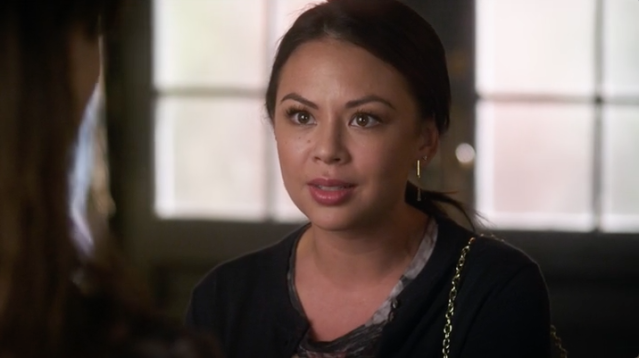 Your outfit is like if my grandma’s pajamas and my grandpa’s pajamas had a business casual baby. 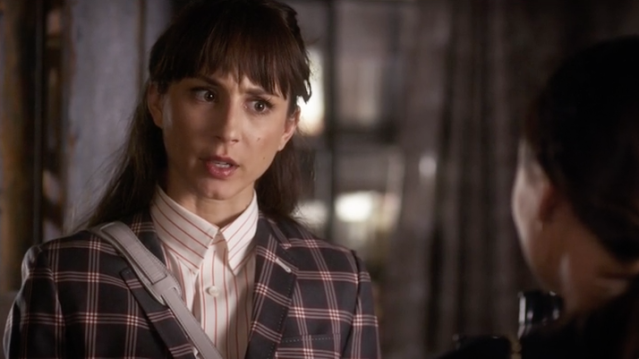 Don’t pretend you have grandparents; everyone knows you were flung from space.

Spencer finally goes to meet Toby at the Brew to explain about Caleb. When she sees him sitting there, she remembers how they broke up. It was at Georgetown. She was maybe pregnant.

Toby: I think now would be a good time to have a referendum on our relationship.
Spencer: I heartily disagree.
Toby: Would having a baby be the worst thing in the world?
Spencer: Right now? When I am 20 years old and only halfway through college? Um, yeah.
Toby: This is about you not loving me.
Spencer: Actually, it’s about the fact that a baby would wreck my life and cut off my path to my career goals.
Toby: We used to want the same things.
Spencer: Yeah, when we were deciding which toppings to get on our pizza and what to watch on Netflix. We’re talking about a human baby, man.
Toby: Oh, well. It was nice when you cared about me, back in high school.

The memory softens Spencer so she confesses to Toby that A is back and that’s who leaked Yvonne’s abortion history. 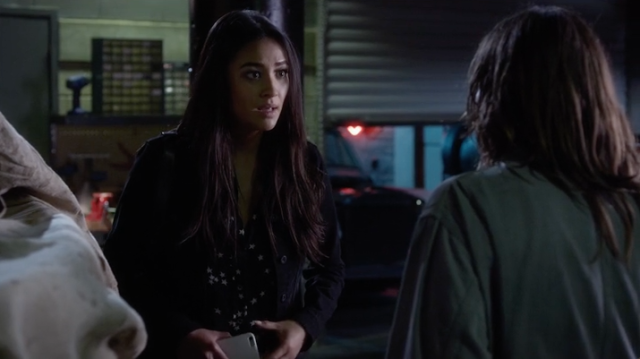 Hi, I’m looking for my way back to Stars Hollow. 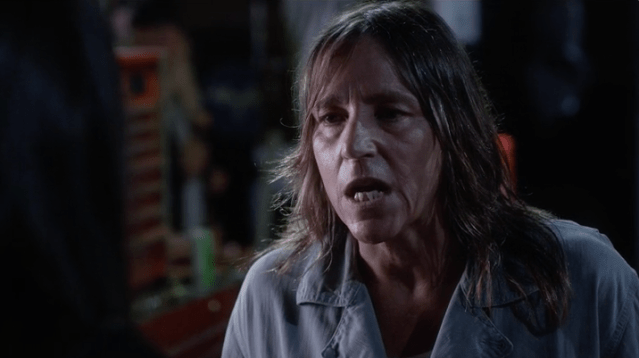 Why don’t you stay for some Turkish Delight.

Emily’s day is more weird but less dramatic. She stands around in the middle of town waiting to see if she hears any of that whirring, like what chased her around the forest last night, and finally she does. Luckily Ezra is there to explain to her that it’s this thing you can get installed on your car to draw attention to yourself if you’re desperate and like to set money on fire. So Emily frolics off to the bizarro alternate universe Rosewood that only she seems to have access to, seeking answers to her car chase.

Her first stop is a seedy car garage where about a hundred guys who look like extras in a pirate movie are standing around and cracking their knuckles at her. She asks the head mechanic if anybody came in to get the whirrers installed on their car in the last few weeks, anyone out of the ordinary, so like not a dude wearing beach day tank top, but potentially a handless girl or a brunette girl wearing a blazer, and like maybe she paid with suitcase handles. The mechanic tells Emily to skedaddle, she shouldn’t be here, this isn’t the place for her, get lost, she’s barking up the wrong tree, she’s asking questions she doesn’t want the answers to, she could tell you but then she’d have to kill you, it’s gonna blow, it’s not what it looks like, she just doesn’t get it does she, there’s a storm coming, etc.

So, Emily leaves and goes back through the wardrobe to real Rosewood to attend to Hanna in her hour of bridal need. (P.S. That head mechanic totally installed the whirrers on Devil Emoji’s jeep.)

Ezra: Good news, I told your boss about you writing my book for me and she agreed that you can co-write my book with me.
Aria: …how?
Ezra: I’m a rich white man who asked for a thing. What do you mean “how”? Anyway, we both agreed you could add a feminine voice to my work.
Aria: That’s definitely not the most condescending thing I’ve ever heard.

Aria talks to whatever her Jordan’s name is about co-writing the book and he kisses her on the head and says, “You’re going to be a published author!” I mean. I guess “Written by Ezra Fitz. Feminine voice consultant: Aria Montgomery” is kind of like being a published author. 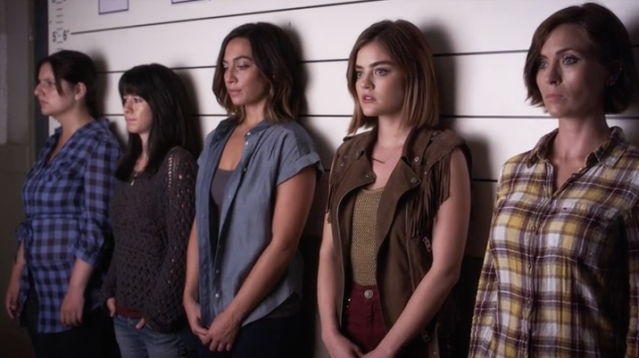 Used to be that three of these women would be gay for Emily.

Aria goes down to the station and stands in one of those police line-ups, and then once she’s free to leave, she sneaks into the bushes and sees Sara Harvey exiting through the back door. And that is enough! Aria stomps back inside and tells Tanner she wants to file a harassment complaint against Sara, which makes sense considering the fact that she was literally every single non-A bad guy on this entire show, but Tanner just blows her off. Before she does, Aria sneaky-peeks at the Two Crows file and finds out that the second attribute of the “attractive brunette” is that she carries a keychain made of pink dice. 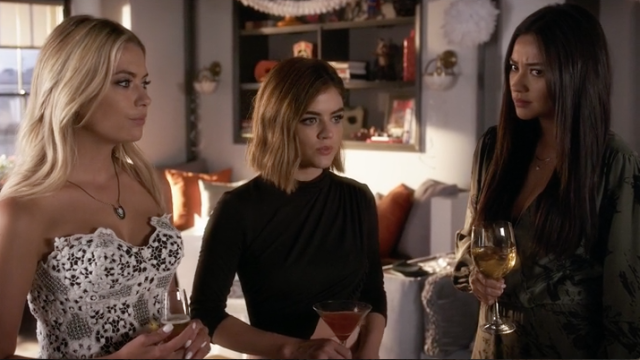 I’m going to vote for the presidential candidate who’ll do the one thing I care about. 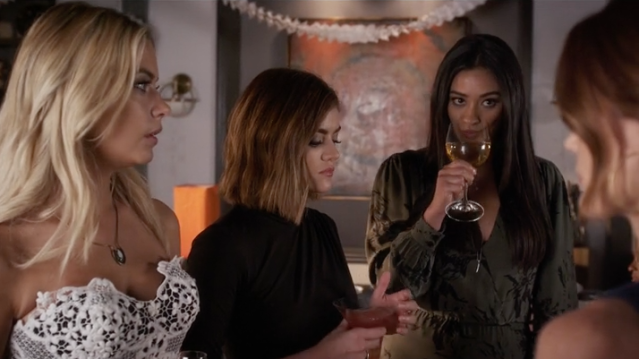 It’s bridal shower time! Hanna and the Liars and a bunch of nondescript “New York friends” descend on Lucas’ loft to drink free booze and pretend Jordan is not an Australian robot. Ashley wants them to play a party game of who knows the bride and groom best, which is amazing because no one knows anything about them because Hanna’s never talked about him to any of them. Emily guesses they met “at a work function,” indicating that she does not, in fact, know where they met, or what this motherfucker even does for a living. Amazing.

Even more amazing: Mona shows up halfway through the shower with this wedding scrapbook Hanna made when she was just a middle schooler. Hanna can’t believe Mona kept it, which is just about the most hilarious thing I have ever heard in my entire life, and invites her in to have some champagne. Not ten minutes after her arrival, my all-time favorite thing of: a room gaining consciousness and attempting to murder everyone inside it happens. Death metal like from when A hijacked the fashion show plays, and the air conditioner starts blowing everything everywhere, and the lights go off — and then the fire place explodes Aria in half! 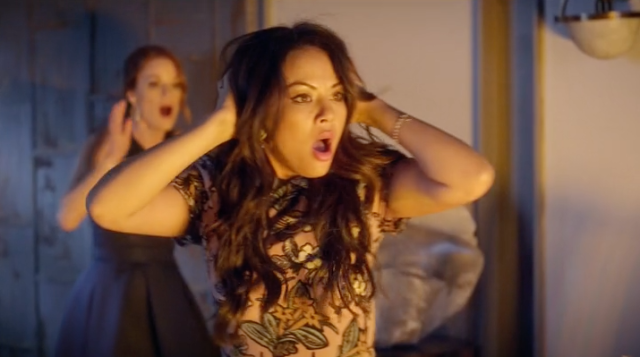 And I will always loooove yooouuu… 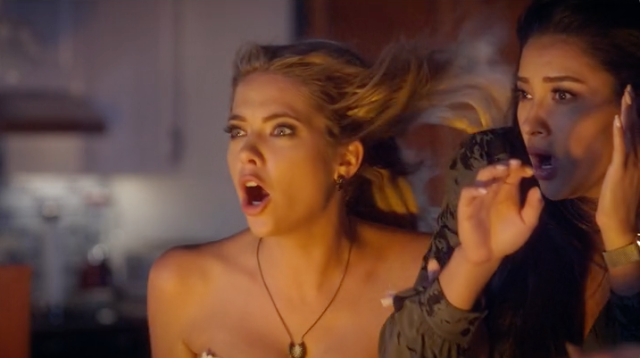 WE GET IT, MONA, YOU CAN SING.

JK, JK, Aria’s only TV hurt. She’s got a little burn on her arm.

Ezra goes to the hospital to sit with her while she recovers. He reads her a fashion magazine. Soon enough, Aria’s Jordan arrives and kisses her face and takes over reading the magazine. I guess Byron and Ella are still on their honeymoon. Or maybe, like Mike, they have been magicked away from this mortal realm.

In the waiting room, Hanna confesses to Ashley that she also hates Jordan. At her house, Spencer calls Yvonne to apologize and offer a sympathetic ear. And in some alley somewhere, Emily and Mona are cleaning up the remains of Lucas’ apartment, when Emily spots Mona’s pink dice keychain. 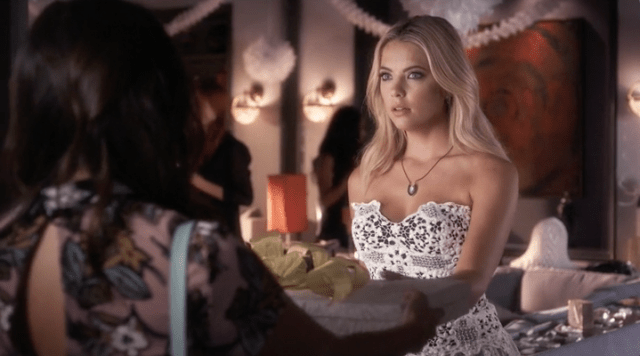 Is this a bomb? 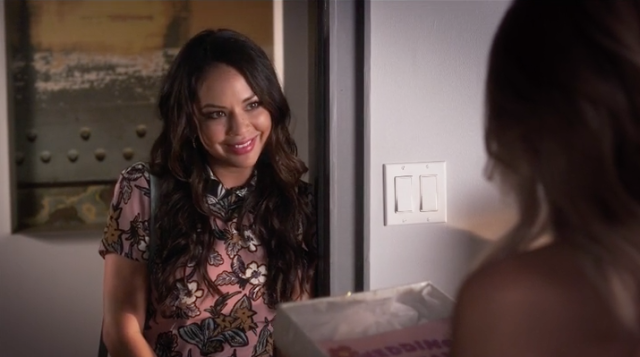 Only one way to find out!

Emily: Was it you?
Mona: Bitch, it is literally always me. Whatever the question, I’m the answer. Get in the car.

Thank you to Nicole (@PLLBigA) for the screencaps!

Heather has written 1122 articles for us.