We begin with Ali in a gayphone (that was a typo but it’s going to stay) in who-knows-where, talking to Shana. She needs help with a mission, we have no idea what she means. Ali looks really upset and desperate. 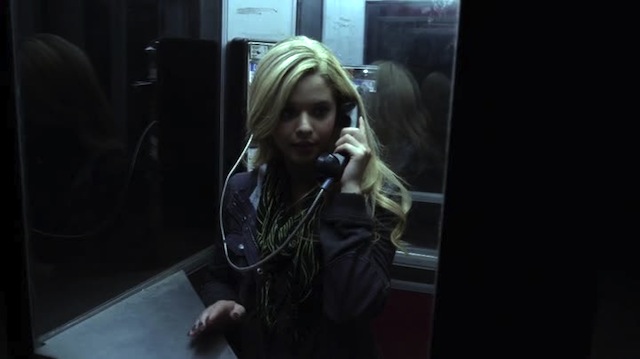 I don’t know where I am, they said something about a Bogus Journey or Excellent Adventure or something, I just know they travel by phone booth. 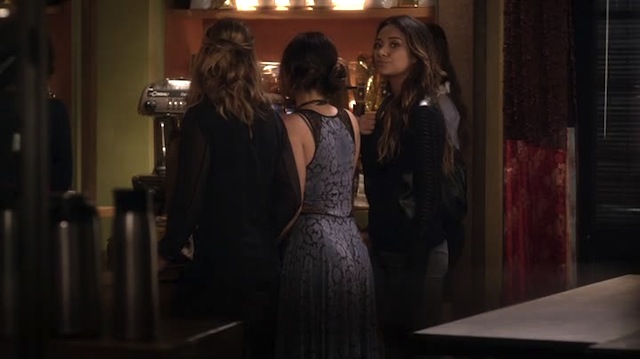 Hey, don’t look now, but some cute girl with an undercut is checking you out, Aria.

We find out that the payphone Shana is on is conveniently located in The Rear Window Brew (or whatever they’re calling it now), because payphones are just everywhere in Rosewood these days, apparently. 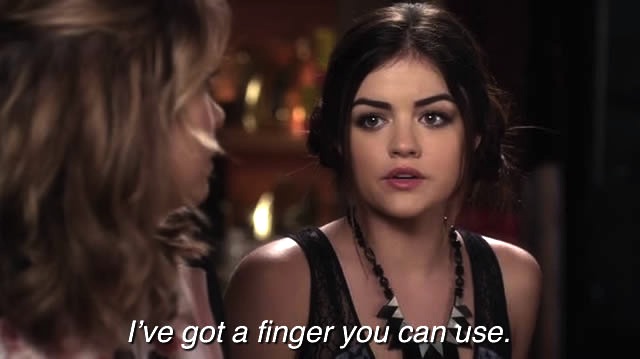 The Liars use this opportunity to discuss how much they hate Shana. 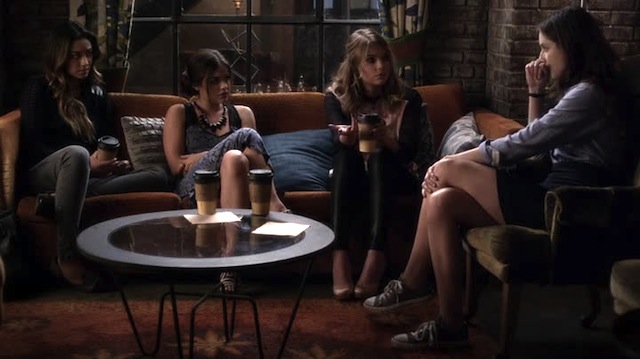 Spence, we’re here today because we love you and we want to see you healthy.

Hanna begins to try to convince the rest of the group to stop looking for A, because A “played post office” with her teeth (I still find the teeth thing so disturbing). I’m really digging this new Chuck Taylor kick Spence is on. She is fidgety and a mess, and the other Liars just chalk it up to stress. All but Hanna. You know it’s going to be an interesting episode when Hanna is the one on the ball.

Let’s get down to business to defeat the Huuuuuuns.

This is Spencer Hastings on drugs. She is far more intense than anyone else on drugs that I know, that’s for sure. That ponytail routine killed me. 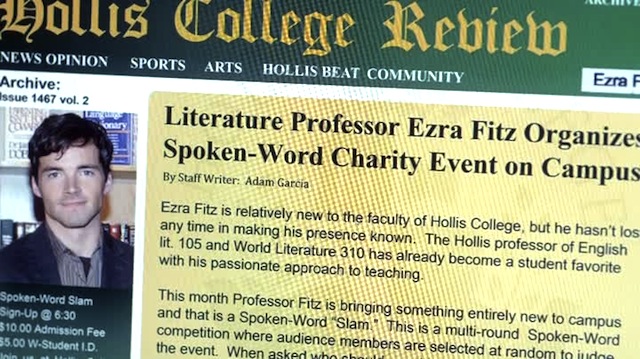 She googles Ezra Fitz Ravenswood, doesn’t find anything but something on Hollis College’s website. 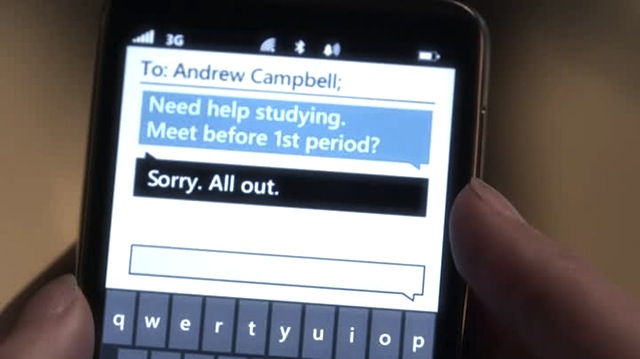 Without the context of drug use, this text looks a lot more euphemistic.

She texts Andrew for some more pills, but he says he’s all out. Hmm. What’s a girl to do? 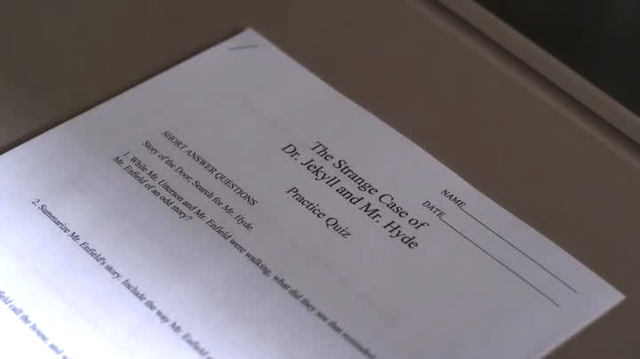 We magically fly through space to land in Ezra’s soundproof classroom where Aria and Ezra are planning to elope. 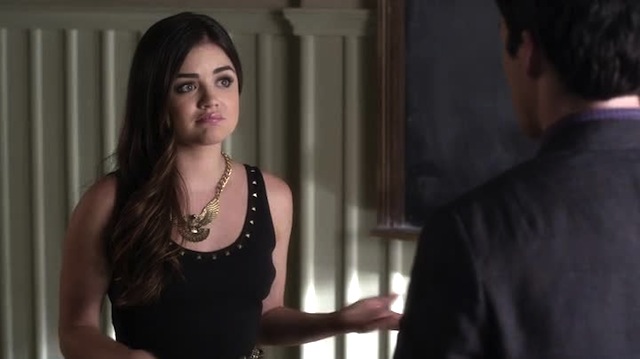 Your lack of foreplay just isn’t doing it for me anymore, Ezra.

Just kidding. They’re just planning a cabin trip. At first Aria’s like “I got shit to do,” but then Ezra guilt trips her and manipulates her into saying she’ll go. This appears to be a healthy relationship dynamic imho. 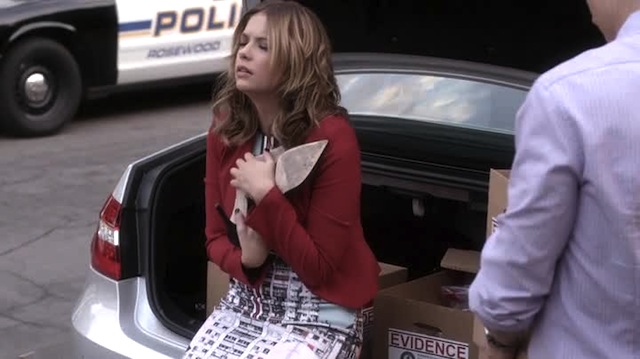 If I were the type of person to add -gasm onto the end of a word, I’d label this a shoegasm.

Hanna’s loading some evidence boxes into her car, which I’m assuming happens in real life? Can anyone confirm whether or not they have ever had legitimate boxes labelled EVIDENCE in their trunk? She finds her shoes and clutches them. That’s our Hanna. She’s finally back.

She flirts a bit with Officer Holbrook, and can we just be honest here? Is this a circle of trust? They have great chemistry. I’m hoping he isn’t just trying to kill her, like every other potential love interest on this show. 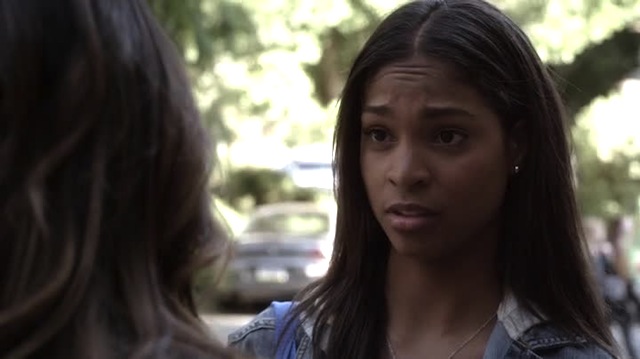 Really? You think the RodeoH is that great? I found the stretchiness kind of hard to control. We could try again later, though.

Emily stalks Shana and wants to know where Ali is. Shana’s not having it, pretending like she can’t give Ali messages from Emily. It’s a weird scene. This show has just turned into a bunch of weird scenes. 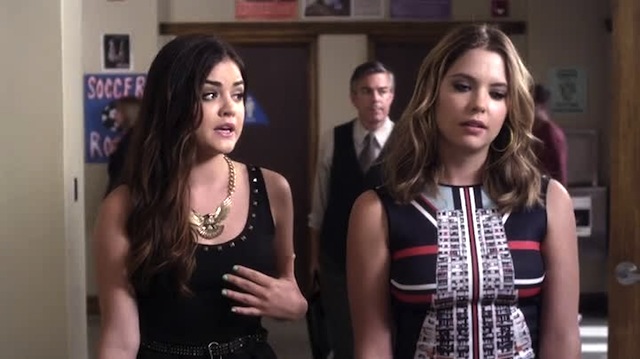 Look, I’m just saying that o.b. is the only kind I’ll use.

Fiiiiinally someone calls out Hanna for hanging out with Officer Holbrook, I mean Gabe, so much. Hanna says, “We’re just like book club buddies without the monthly meetings.” We’ve all used this line before, am I right? 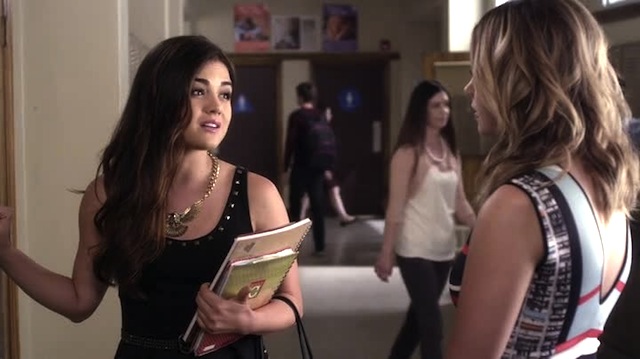 And this Diva Cup kick you’re on isn’t cute anymore. 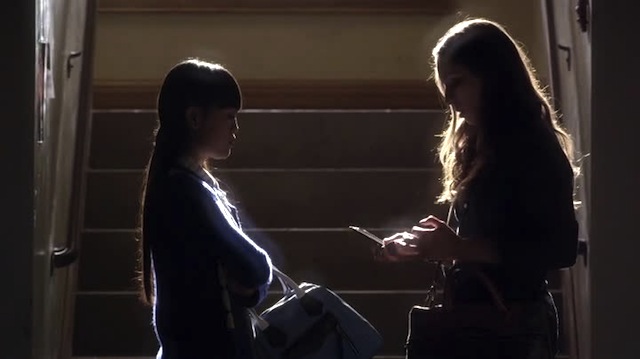 The most angelic looking drug deal I’ve ever seen.

Meanwhile, sketchy and addicted Spencer is stalking through the halls, ready to turn into a METH: NOT EVEN ONCE PSA at any given moment. She happens upon a girl in a cardigan who hands out drugs. She gives her $50 for some pills. My sister, while watching this scene: “This is stupid. Your dealer doesn’t make fun of you.” I cannot confirm nor deny the legitimacy of this statement. 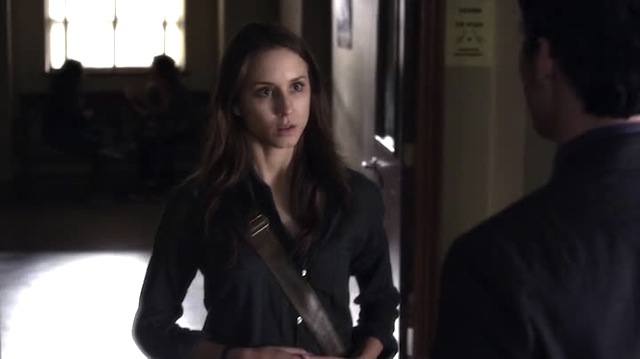 Ezra catches Spencer and is mad about an essay that Spencer phoned in. Spencer is trying to act like she doesn’t give a fuck about the essay, but seriously, I think the acting direction in this scene for both Ezra and Spencer was, “Just open your eyes as wide as you can and blankly stare at one another.” 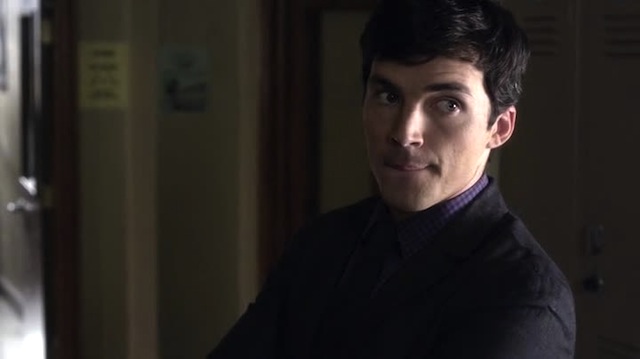 Ezra tells Spencer that if she isn’t careful and she ends up with sloppy work, she’ll end up suffering. Then he makes the iconic Ezra face without lips, so we know he’s really serious. 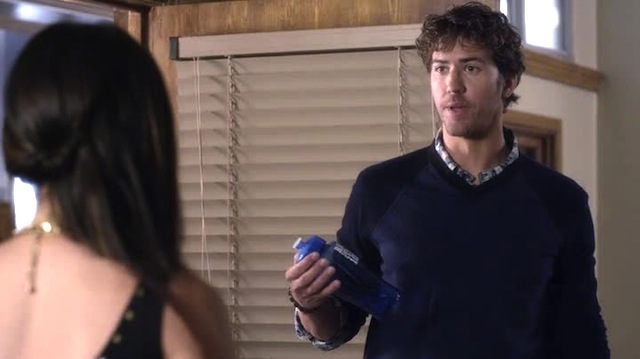 Hydration is super important, I’m glad Jesse is wise to my #1 cause.

Aria goes to Jesse, the high school counselor/psychologist/new hottie in town hey ladies, to talk about her anger and other feelings. 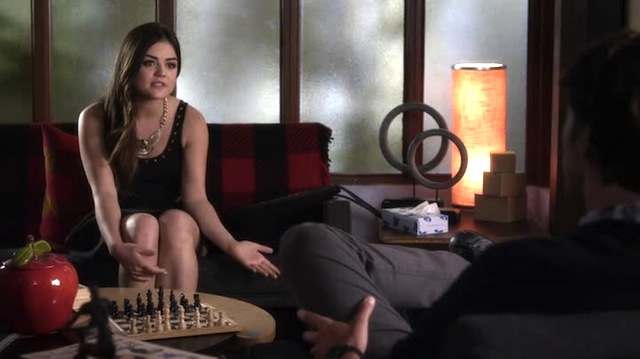 I wouldn’t say I’m Grandmaster Kasparov but I know my way around a board, thanks.

She ends up realizing that her boyfriend is a manipulative jerk and freaks out, then runs out of his office. Totally natural, don’t even worry about it. 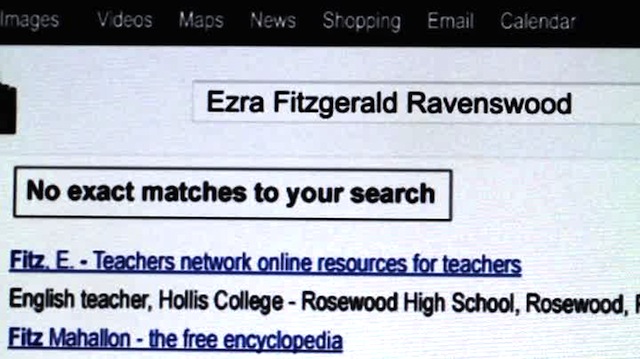 Actually this search just pulled up “About 3,770,000 results” for me so maybe Spencer’s Google machine is broken.

Spencer tries googling “Ezra Fitzgerald Ravenswood” and pretends not to be home while Hanna and Emily sit outside her house, as one does when concerned about a friend. 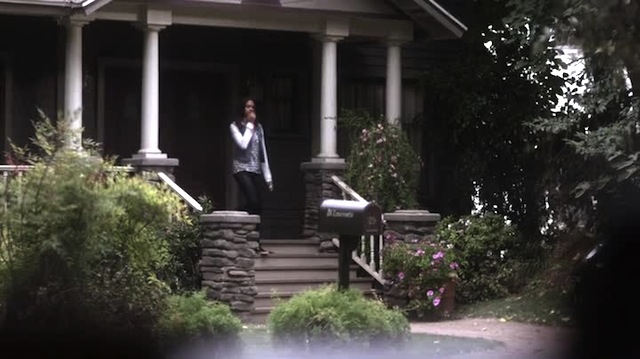 The only thing that would make this look more suspicious would be whistling. 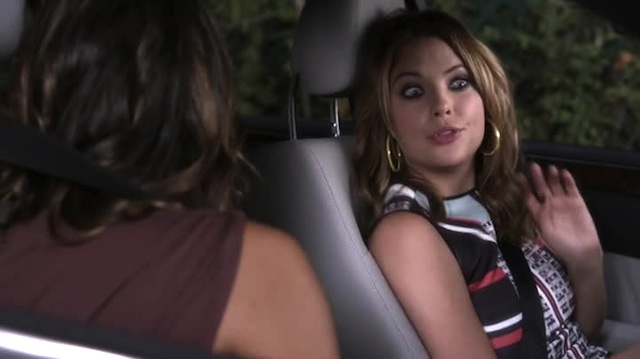 Caption this for me, I would never be able to do it enough justice. 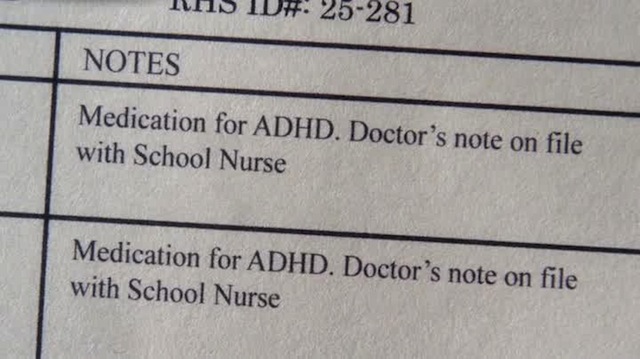 Ezra steals Spencer’s student file and finds that she has a prescription for ADHD. 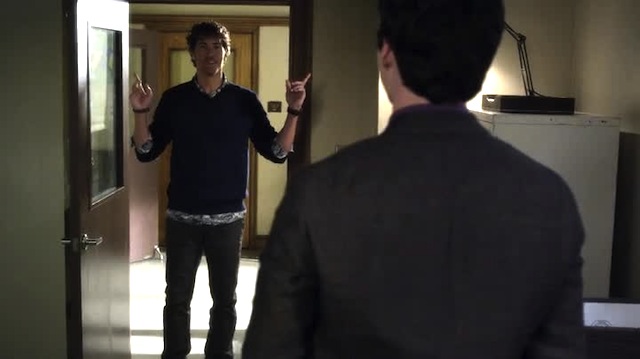 No, see, it’s obvious why Aria’s dating a guy like you, Ezra.

He almost gets caught by Mr. Let’s-Talk-About-Feelings Jesse. I’m feeling suspicious of this duo and of Jesse’s role in this show in general. 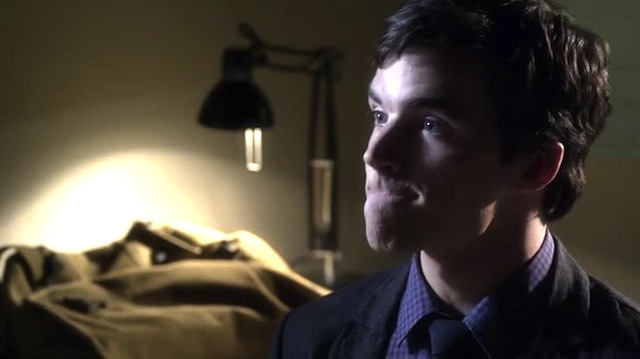 Well, that ADHD prescription is just so super convenient that Ezra even does his no-lips face of approval. 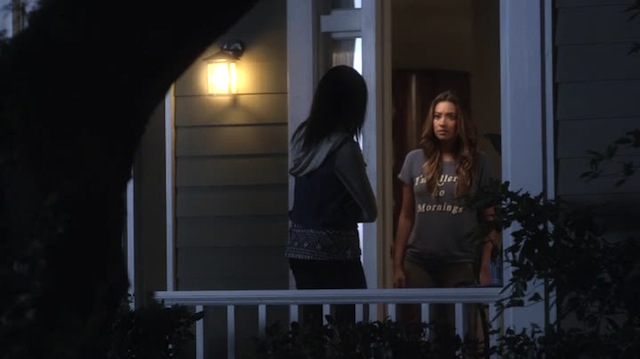 Shana comes to Emily’s  house late at night, as one does, and we see a photographer staking out the place. 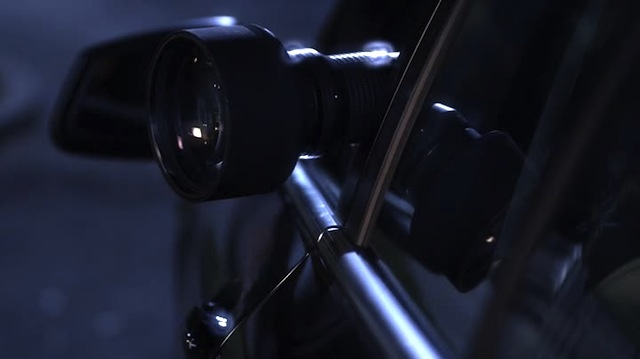 This will be important later, take note. 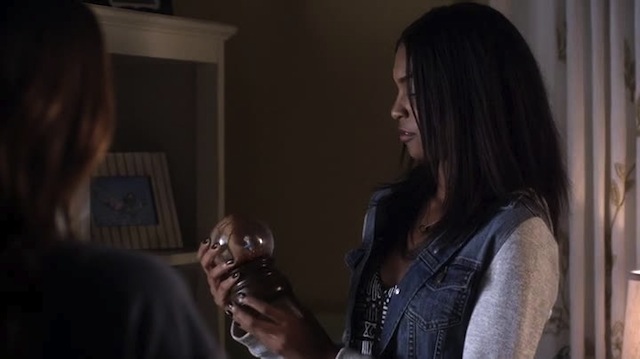 Shana walks into Emily’s place like she’s been there before, because she probably has, and starts messing with all of her stuff. Oh, she also asks Emily to break into Ali’s house and steal something for Ali, nbd.