With the 2016 U.S. presidential election still an agonizing ten thousand years away, it’s time for Americans with blistered souls to look across the pond for comfort, which we will surely find tonight in the open arms of Sue Perkins, Mel Giedroyc, and my beloved goddess Mary Berry. Yes, my dear friends: The Great British Bake Off is back for series seven. (I am allowed to talk about this in the Pop Culture Fix because Sue Perkins is a lesbian, let me live!) Obviously if you are in the UK, you will watch it at 8pm on BBC One. If you are not in the UK, here are some helpful viewing tips.

Just a reminder that the last minute of series six was the greatest sixty seconds in the history of television.

Look, I’m serious: Watch this show. Even if it’s just on US Netflix, where you can find series five right this second.

+ Jill Soloway is tag-teaming with Amazon again. This time, she’s working on a musical comedy. According to The Hollywood Reporter, the show will “follow a woman’s search for love and self-discovery in Los Angeles.”

+ You care about this trailer, trust me. (Yeah, that’s Alia Shawkat and Aubrey Plaza as Hamilton and Burr.) 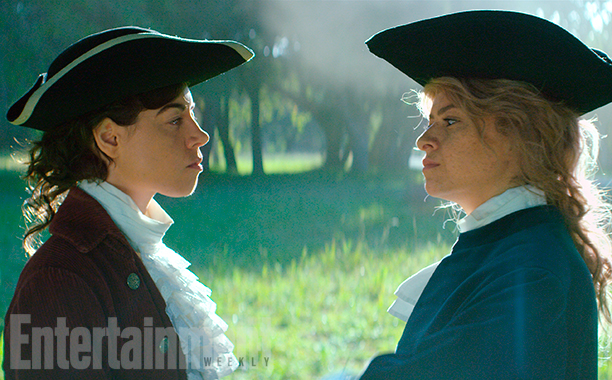 + In this, the year of the Bisexual Revolution, esteemed bisexual Anna Paquin will star in a new Netflix series adapted from Margaret Atwood’s Alias Grace.

+ Scream will be back with a Halloween special in October.

+ Jill Pantozzi and Donna Dickens discuss the Arrow-verse’s commitment to LGBT representation on the latest episode of She Said/She Said.

+ Tara’s going to be alive, after all, on this season of The Walking Dead. (I guess?)

+ Ellen Page and Kate Mara’s romantic drama, Mercy, has found its director and it is Tali Shalom Ezer. Her first feature film, Princess, is one of the most unnerving things I’ve ever seen, and I was really hoping for more of a rom-com, but okay!

+ Sharon Van Etten released a song for the victims of Orlando’s Pulse nightclub shootings. The proceeds from song will go to a charity that aims to stop the NRA from influencing common sense gun safety legislation in the United States.

+ This is a very interesting read: Sarah Paulson sits down to talk with real live Marcia Clark.