In less than two weeks, this nightmare hellscape of an election season will finally be over, and the celebrities of the world are using their star power in these final hours to remind Americans not to vote for Donald Trump. Adele endorsed Hillary at her concert in Miami last night. Madeline Albright hung out with Samantha Bee to talk about why men are terrified of women. (Sam Bee also took on Trump’s ridiculous abortion rhetoric from the third debate.)

Yesterday, Pussy Riot released a new song and music video called “Straight Outta Vagina.” Nadya Tolokonnikova told The Guardian “This song could be considered an answer to Trump. But I believe the idea of powerful female sexuality is much bigger than any populist megalomaniac man … Vagina is bigger than Trump.” Don’t click on this video unless you want this song to be stuck in your head until at least election day.

If women vote together, we will decide who the next president will be. #WomenCanStopTrump pic.twitter.com/xCO8DTNlrY

+ Look, everybody, even straight people, know Alex and Maggie are going to happen on Supergirl. Here is the promo for next week’s episode. Masks!

+ Every episode of Jessica Jones’ second season will be directed by a woman.

+ Korean director Park Chan-wook talked to Jezebel about The Handmaiden, his adaptation of Sarah Waters’ Fingersmith (which I have not seen yet, but will see this weekend and write about it for you). I liked this answer about the sex scenes because it is literally the opposite of Blue is the Warmest Color.

I wanted to show the process and the pleasure that you have from the process of making love. Rather than the act of lovemaking itself, I tried to focus on the emotional intimacy of the two characters. And as a way of doing that, I tried to infuse the sex scenes with as much dialogue as I could, with almost the goal of making this the sex scene with the most of dialogue in the history of cinema. I tried to infuse it with as much humor as possible. In focusing on the characters’ emotion during lovemaking, I wanted to make it feel playful and feel more like a game. By the time we get to the end of the film, I wanted to also make it feel like a ritual, of these two women celebrating their newfound freedom. I wanted to convey the sense that they’ve finally broken the bonds of their class difference, nationalities, and their age gap to find true equality.

+ Mary Lambert stopped by Stonewall this week for a surprise three-song concert to support gay people and national parks! My favorite combination of things! 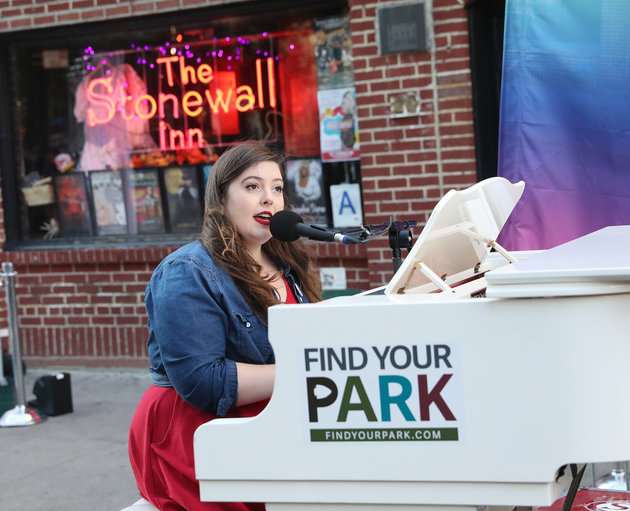 + Lady Gaga did some Carpool Karaoke this week.