Big week! Erin’s liveblogging Carol Blackout 2K17 as we speak. I got my tickets for Battle of the Sexes (and will have a review for you on Friday). And The CW has greenlit a “dark” “coming of age” “horror” reboot of Sabrina the Teenage Witch, which will be brought to your TV by the folks behind every gay woman’s secret favorite show, Riverdale. Here is the official thing The CW says:

“The Chilling Adventures of Sabrina’ reimagines the origin and adventures of ‘Sabrina the Teenage Witch’ as a dark coming-of-age story that traffics in horror, the occult and, of course, witchcraft. Tonally in the vein of ‘Rosemary’s Baby’ and ‘The Exorcist,’ this adaptation finds Sabrina wrestling to reconcile her dual nature — half-witch, half-mortal — while standing against the evil forces that threaten her, her family and the daylight world humans inhabit.”

And here is the official Autostraddle response:

Heather: oh cw is letting riverdale remake sabrina the teenage witch as a “dark coming-of-age horror series.”
Riese: will the lesbian moms be lesbian moms this time?
Yvonne: omg i love sabrina
Riese: SHE HAS TWO MOMS
Riese: AND A TALKING CAT
Riese: how is that not a lesbian household?
Yvonne: remember every teen show would always some how have an episode where they switch genders for whatever reason? like i recently watched the sabrina version of that episode on prime and it was the gayest thing ever 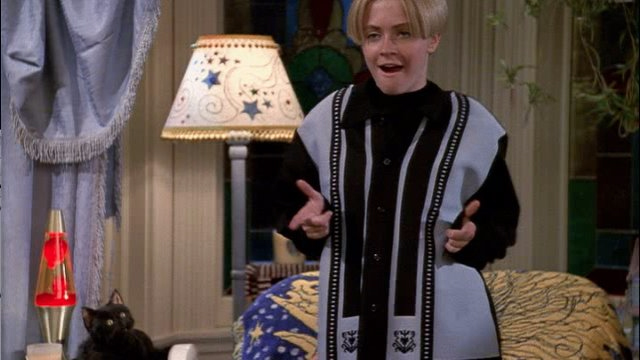 + On the TIFF red carpet someone asked Allison Janey what C.J. Cregg would say to Sean Spicer and Sarah Huckabee Sanders.

+ This is a pretty chill headline.

+ Shondaland.com is here and right out of the gate Mallory Ortberg is writing about binders.

I cannot promise this will happen for you, but here is what happened for me: I put on a shirt over the binder and I saw a look on my own face I had never seen before. There was joy in it, and amazement, and utter delight. There were other things, too, that I do not yet have words for. I felt, at thirty years of age, a wholly new feeling about my own appearance that I had not known it was possible to experience, and that is worth something, in my opinion. I had no idea a person could feel that way about themselves, much less about the way they looked in clothes! How funny that is. It felt like a compulsion, but it was not. I made a series of choices, and they produced an overwhelming feeling within me. Writing about it now feels like a compulsion, but it is not; it is a choice that I am making, however difficult I may find that to believe.

Aziz was like, “You should write something down.” I don’t believe in that. I know that’s a little scary. I just like to speak from the heart and to go from the dome. I would never pull out a piece of paper. I mean, I knew who I had to thank. I knew my main people like Aziz, Alan [Yang], Netflix, my lady, cast and crew. But I knew I had to speak from the heart. I knew I wanted to share that moment with the queer community, with women of color, women writers, anyone who’d ever been othered. I knew I wanted to say something from my heart and my soul and my gut.