Welcome to the pop culture fix, your weekly dose of important news related to — you guessed it — pop culture!

Queer People, Out And About

+ Carrie Brownstein is doing the rounds promoting her memoir, Hunger Makes Me a Modern Girl, and so last night she stopped by Colbert to talk about being a kickass musician and also a person who does “talky talk.” He asked if she was cool and she answered him so charmingly, because of course she did. She also talked about her passion for the Somber Grrrl movement and announced her new solo album, O Dreary, Baneful Morning. (I didn’t mention this in my Carol review, but Brownstein has a brief cameo in the film.) (Also, just in case you’re worried, the meat of her memoir is Sleater-Kinney.) (And she’s doing an AMA on Tumblr today.) It’s Carrie Brownstein Month, basically, is what I am saying.

+ Ruby Rose hosted MTV’s European Music Awards on Saturday night in Milan. When she was introducing Duran Duran, she addressed the audience as “Ladies and gentlemen and everyone in between,” and even though the internet went bananas for it — because who even hints at talking about gender fluidity on TV ever? No one, that’s who — the U.S. re-broadcast cut the line out. MTV said it was because they needed to get the show down to two hours, which is maybe true since they edited out Duran Duran’s entire performance. I don’t know. MTV makes me tired. Remember when they kept saying “girl beef” at the VMA’s this year, and like trying to get all the female performers to do impromptu naked oil wrestling or whatever? I’m a thousand years old.

Anyway, Ruby Rose looked great that night! I think she tired to burn down the patriarchy with flamethrower! 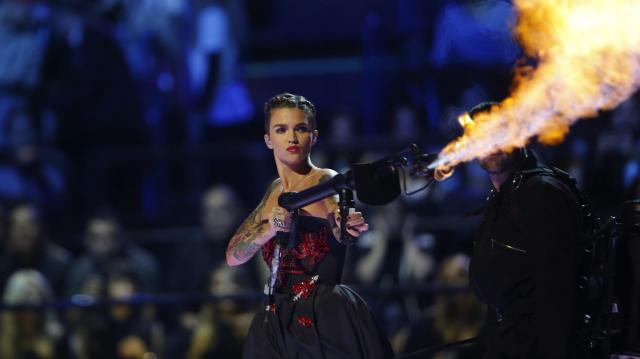 + The legendary Sylvia Rivera is the first trans person to have a portrait in the Smithsonian’s National Portrait Gallery. From the museum:

Luis Carle’s photograph, taken the Saturday before the 2000 Gay Pride Parade in New York City, depicts Sylvia Rivera (1951–2002), a transgender person who was a leading figure in the quest for LGBTQ rights. Rivera sits in the center of the photograph, between her partner Julia Murray (right) and Christina Hayworth. The three women are shown, hands interlocked, sitting on a stone wall with a sign at their feet that reads “Respect Trans People/Men!” The photograph captures a somewhat atypical scene for Pride Weekend. Rather than the bustling energy of the parade with crowds and celebration, this captures a moment of tranquil friendship and unity. The three women are shown joined together in the movement to ensure equal protection for the transgender community. As a Latina who spent much of her life homeless, Rivera was particularly sensitive to the struggles of trans people of color and those living in poverty.

+ GLAAD has released its annual Where We Are On TV report, and it’s pretty optimistic this year! They counted 271 LGBT TV characters across various platforms, 35 of which are regular characters on primetime TV. The problems, of course, are the complete lack of diversity among those characters. Bisexual characters, for example, almost all reinforce negative stereotypes. And most of those 271 characters are white gay men. The report likes The Fosters and Orange Is the New Black best of all, which makes sense because they’re actually diverse and actually awesome. If you have time, flip through the whole report. Even if you just want to look at the charts. It’s fascinating.

+ Y’all, Fox is remaking The Rocky Horror Picture Show, which: fine blah blah whatever. But the main thing is that Laverne Cox has been cast as Frank-N-Furter!

+ Netflix has finally released the full trailer for Jessica Jones (a show that will feature three queer characters), and it is dark as fuck. Like Dark Knight dark.

+ If you are one of the five people in the United States of America who did not watch the Supergirl pilot, you can download it for free on iTunes. And you should. You should do that. It’s a sweet and awkward and self-assured show about a lady superhero who cares about her career and her bond with her sister and beating the hell out of bad guys. I love it. (It’s sort of the anti-Dark Knight.)

+ Despite bleeding viewers toward the end of the first season, I Am Cait has been picked up for one more go. E! announced its renewal yesterday. I’ll bet you five dollars it’s going to be suuuuper Kardashian-heavy going forward.

+ Soon-to-be Freeform is releasing new promos for the upcoming Six-Year Time-Jump season of Pretty Little Liars. I wish I were more excited about it. One thing that makes me happy is there’s a photo floating around from the 6B premiere of Ezra having like a full-on psychotic break. I hope the Liars fuse together like some Steven Universe Gems and punch his head off his body.

+ Cara Delevingne’s Suicide Squad Enchantress has been revealed, and she is legitimately terrifying. 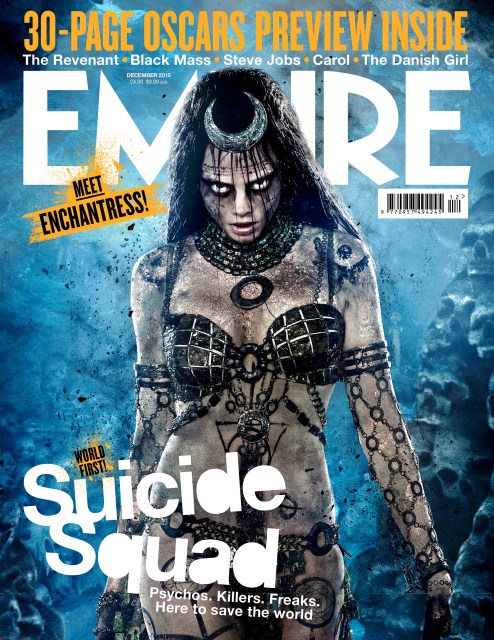 “She’s an ancient sorceress,” says the star. “A feral being. She’s been trapped for so long and now she’s finally let out.” The hapless human whom Enchantress takes over is June Moone, who finds more than she bargained for while exploring a creepy cave. “June is an adventure-seeker who’s always wanted some excitement. And she gets what she wished for, in an terrible way.”