I think it’s important to review every movie based on the kind of movie it’s trying to be. There’s room within queer cinema for boundary pushing art and sexy fun. Late at night, when you’re a little high and scrolling through Netflix’s LGBTQ section, you probably just want whatever has two girls almost kissing on the poster. Or three. 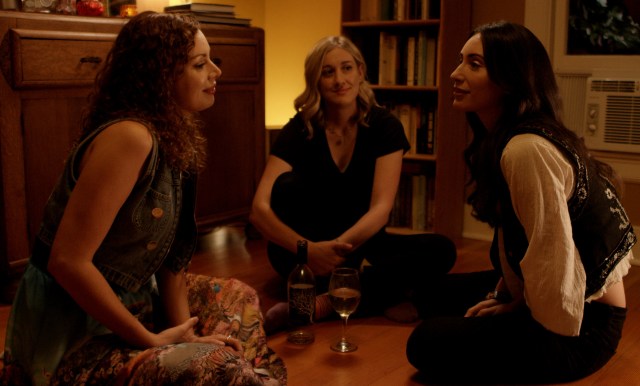 It’s obvious once they enter Mia’s home that something is amiss. Kate is actively hostile to Jenna, and it’s clear Mia is hiding something, or multiple things.

All the actors do their best to ground the material. Julia Eringer as Mia is especially good at providing a stabilizing presence between the drama of the couple.

The best scene of the movie involves a popsicle sex act that’s driven by spite. The reason this moment works so well isn’t just because it’s the most explicit in the film. It’s also the only time Jenna is allowed to respond to conflict in a way that feels real and unique and fun.

If only more of the film had this level of ease. If only Carlton had allowed her movie to be what it so clearly wanted to be.