Now in its seventh season, SyFy’s Channel’s Face Off is one of the better reality competition shows out there, despite not having as much hype as some more backstabbing programs. The skill showcased here is special effects makeup artistry that is so much more than painting a face. They have very limited amounts of time to create truly fantastical creatures, monsters, aliens and any characters that are visually super, sub or other-worldly human so there isn’t as much emphasis on alliances or arguments — just a do it and do it well mentality.

For a look at what you can expect this Season 7 trailer is a quick visual intro:

What is extra special about this season is out lesbian contestant, Stella Sensel, a Brooklyn based artist specializing in Special Effect Prosthetics including application, design, sculpture, molding, formulation of foam latex, silicone, gelatin, and pros-aide transfers. She also highlights her abilities in natural make-up application and creative hair designs for period or contemporary scenes.

Sensel’s career began in the NYU Tisch School of the Arts drama department before spending 11 years in the Halloween industry. This inspired her to focus her efforts and attend MakeUp Designory’s Master Program which lead to a second place finish in IMATS London “Battle of the Brushes” competition. But forget all her accomplishments, what we really want to know is does she have a sense of humor? The answer is most certainly yes as her SyFy Channel official bio includes this fantastic tidbit: “She met her wife at an Amateur Female Jell-O Wrestling match, and lives at their recently purchased home with their dog.”

The first episode, which aired last Tuesday but is currently streaming onDemand or through your SyFy’s or your local cable provider website, was aptly titled “Life or Death” because two contestants were going home immediately, without even technically getting to participate in the show. I’m going to give you the spoiler that Stella advanced straight up because I wouldn’t be writing this without the contestant on our team advancing at least one round. But we did not get a lot of insight into her work. She was given plenty of intro but very little focus on her wood nypmh, which landed squarely into the “safe but not exceptional” group that made it to the second round.

If you care more about Sensel than the show as a whole, however, she has already begun an episode by episode blog about her role in that week’s show and how she feels about how it all went down. In this week’s she fangirl’s out on the appearance of Freddy Krueger actor Robert Englund and proves she’s not a conformist by running to the life side of the challenge when everyone else chased after death. But it gets most interesting when she really opens up about her process, saying:

Meanwhile what you are not seeing is that my airbrush that I picked up from the shelf had been previously used and was totally clogged. Now, before beginning the challenge we were told we could pick ONE airbrush. I stupidly followed the rules and was FREAKING OUT and trying to clean this brush out. IU’m losing precious time, my paint job is suffering. I later learned that the same thing happened to Sasha and she grabbed like 5 airbrushes because she doesn’t care about follwoing the rules. And honestly, I should have done the same thing.

But WHAT did I actaully do with that broach? I made a staff! It’s the source of her power. I basically took Robert Englund’s advice and gave her a prop to play with. And It was better than incorporating it into the makeup. What they didn’t show is that they brought out a second set of things to incorporate into the makeup, stopping us a second time with another twist…

After 4 hours I’m soaked with sweat and we are told to stop and it’s time to present to the judges. Who is judging???? Oh just Glenn Hetrick and Neville Paige. No biggie!

And this is her final piece: 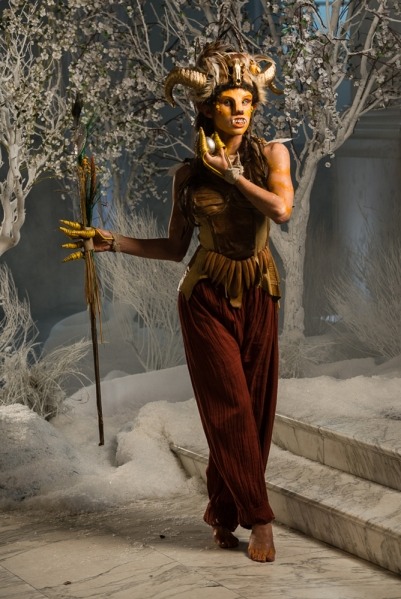 Another woman, however, took first place with an inspired cabbage leave earth mother that was made by cake decorator Dina Cimarusti. She was quite surprised to be at the top but certainly deserved it.

The next episode airs tonight, Tuesday July 29th, 9/8 central on SyFy with an “American Gangster” theme.