Original Plumbing, AKA the amazing brainchild of Amos Mac and Rocco Katastrophe Kayiatos, is a print magazine dedicated to “the sexuality and culture of FTM trans guys.” It was founded in 2009 and came screaming onto the Internet a year later, giving everyone on the planet even more of the amazing photos and writing that make OP great.

Right now Original Plumbing is having some growing pains related to the sustainability and usability of their website. (I feel like all of us here can relate to that pain, yes?) In further overlapping commonalities with our own website redesign, they’ve launched an IndieGoGo campaign to raise 20K and fix their site, and they have 11 days left to reach their goal.

If they don’t make it to 20K, they won’t receive any of the money they’ve raised thus far, which as I am typing is around 12,000 buckaroos. And that would be a damn shame. 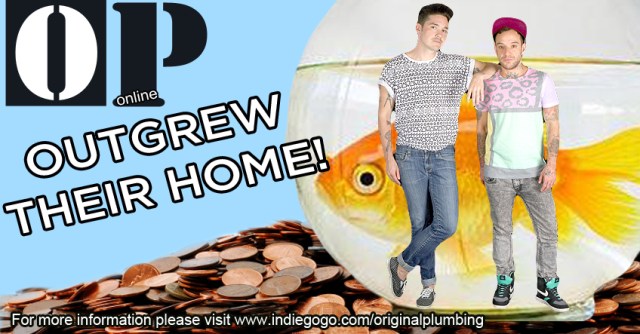 If I were a high-powered rapper I’d probably just be selling my cars and funneling my cash to OP until they hit their goal and then I would send a bottle of Grey Goose over to Rocco and Amos as a finishing touch. I wouldn’t even need to write this team pick because it’d be all taken care of, la la la fantasy land everything is wonderful and nothing hurts! Unfortunately, the honest truth is that I’m only good at rapping when I’m completely drunk and Amos and Rocco probably need a lot more than one bottle of vodka to deal with the pressure of an all-or-nothing fundraising campaign.

So this is where you come in.

I know that we all have these things in common, without question: we know that finding a place where you feel understood and represented is important, and that only some people speak your language, and that when the website that gives you a voice and takes your breath away isn’t working you absolutely lose your shit about it.

Original Plumbing deserves a new website, and in the spirit of brotherhood and the revolution and Autostraddle redesign karmic juices, I’m urging you to make it happen.

Let’s make it rain for our bros.