Maritza and Flaca are the happiest clams in the clam-diver Panty Power Club, it’s like they got a little secret under their pants.

Maritza: I feel like I got a secret, you know? Like we’re part of this secret club that nobody knows about. I feel cool.
Flaca: Oh my god you just said that and my nipples got like, super hard.

Gotta say when I saw that line in the preview I was expecting a different context. 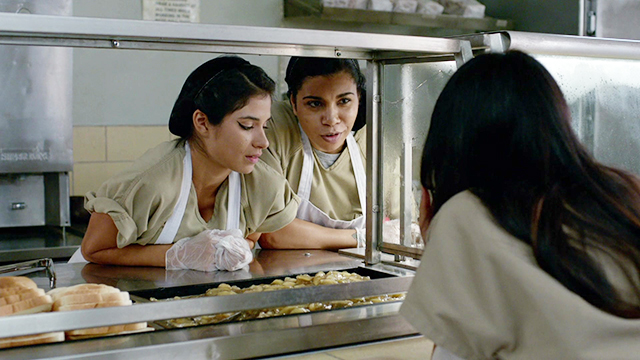 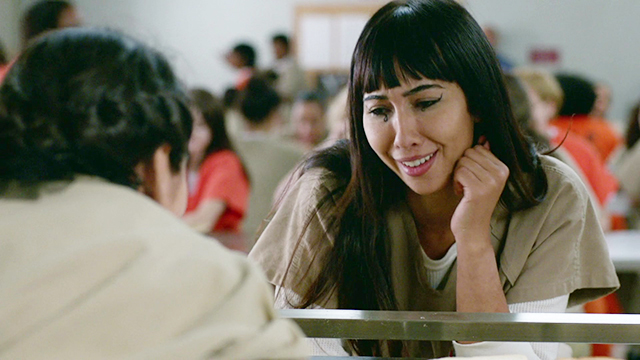 Get out of here, that looks nothing like potatoes

Big Boo tells the girls that her friend saw the panties online for $70 a pop, which gets them all a little riled up — they deserve more than flavor packs for all the pussy power they’re discharging. 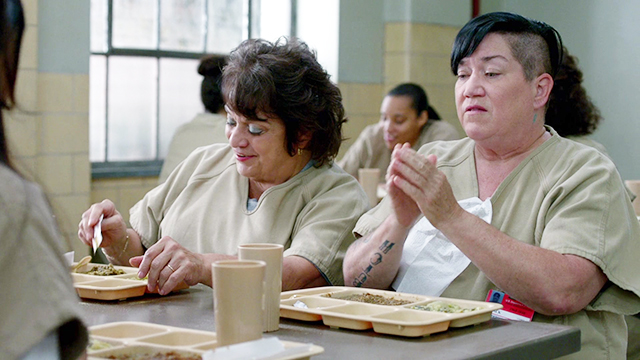 Bless us, O Lord, and these, Thy gifts, which we are about to receive from Thy bounty. Through Ellen DeGeneres, our Lord. Amen.

Suzanne approaches the broom closet, tentatively… can she do this? Is she able to do this? Does she have it in her to really like, to truly once and for all, to absolutely and definitively do this? 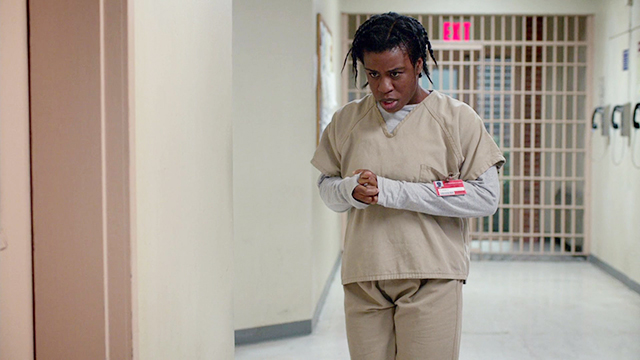 Maureen senses her (and sees her through the glass), gets eager — Suzanne reaches for the doorknob but then, no. She can’t. She’s too scared. She’s not ready. 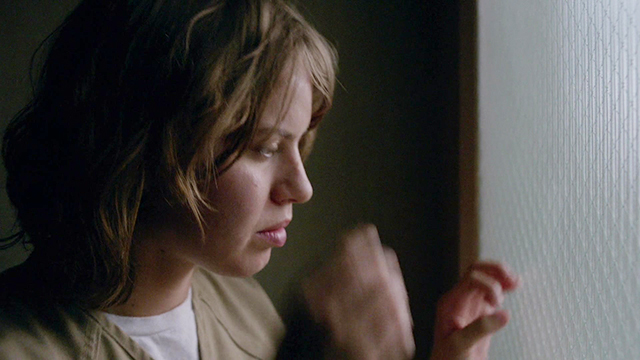 The Normites meeting falls quickly into chaos ‘cause Leanne’s being bossy and nobody likes it. 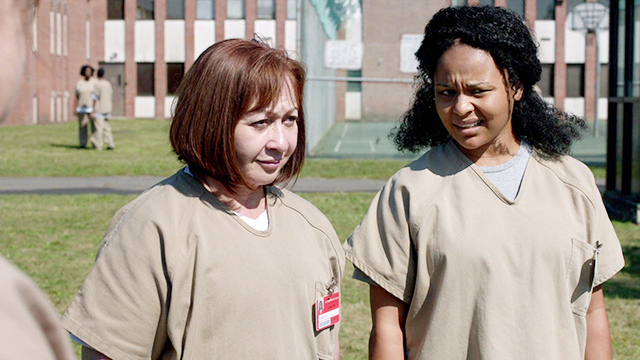 Hey look I didn’t invent the game or anything but are you sure this is how you play Ring Around The Rosie?

Before somebody can say that Norma is their right intestine, the guards show up and the flock scatters, only to be relegated to work duty. This is where Soso finds them, and Soso is a mess. Like nothing matters and fuck everybody. So when Leanne says, “See girls, I told you she thinks she’s better than us,” and Soso points out that it’s hard to avoid sounding condescending when they are literally scrubbing the floor beneath her feet, this doesn’t go so well:

Leanne: You’re a bitch!
Soso: You know what? Fine. Maybe I am better than you. And I’m not apologizing for it. 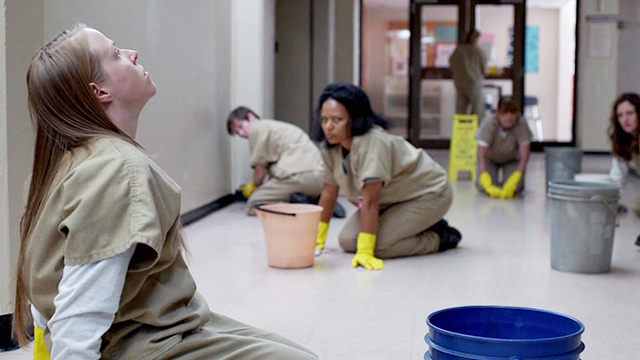 I’M SORRY FOR NOT KNOWING THAT YOU CAN STOP THE SODA FROM EXPLODING BY TWISTING THE CAP SHUT AGAIN AND THEN OPENING IT IN SLOW INCREMENTS, I MEAN SERIOUSLY I KNOW YOU’RE ALL ACTING LIKE I’M THE ACTUAL WORST BECAUSE I DIDN’T KNOW THIS BUT REAL TALK: RIESE CEO OF AUTOSTRADDLE DIDN’T KNOW THIS UNTIL LATE 2007 WHICH IS WHY HER STRATEGY FOR A SODA LOOKING LIKE IT WAS ABOUT TO EXPLODE WAS TO DROP IT ON THE GROUND AND RUN AWAY

In the kitchen, Red’s found purpose by teaching the girls how to cook fresh vegetables and feeding them ratatouille. Eating it makes them feel like people! Human beings deserve real food. This should be a basic right. 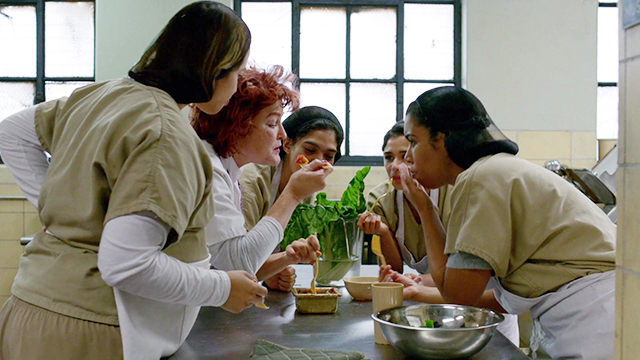 Coates calls Dunkin’ Donuts into the office for a lecture regarding his failure to show up for a thing and also another thing, which means he’s on probation now, and probably also will blame it all on Tiffany, despite the fact that he’s gotten more job training from her than anybody else in this place. 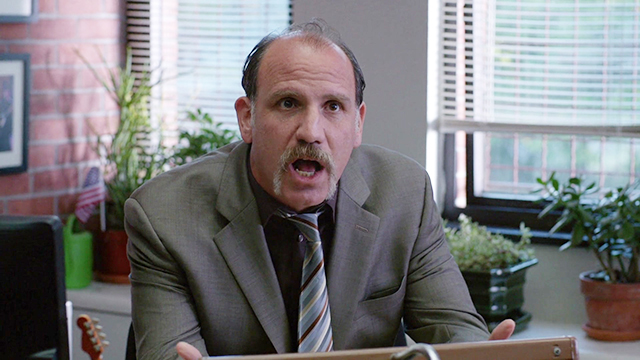 Look man, the handlebar mustache is MY THING, I made it CRYSTAL CLEAR that new COs were not supposed to be growing their own 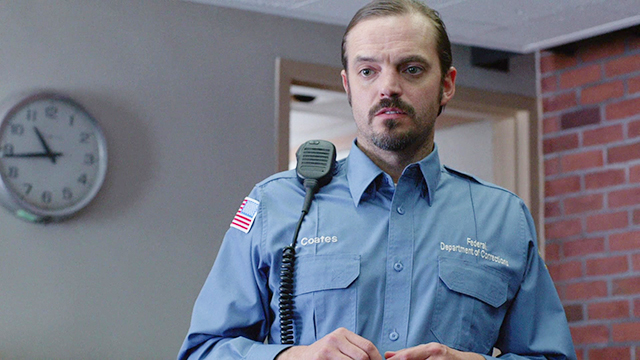 The Visitor’s Lounge is all spruced up for the springtime! JK it’s like normal, but Mrs. Pornstache is there to say she’ll still adopt the kiddo if Daya’s up for it, which makes Daya almost cry.

Daya: “Yes, please take her. Take her and give her the best life you can give her.”
Mrs. Pornstache: “I will. I promise.” 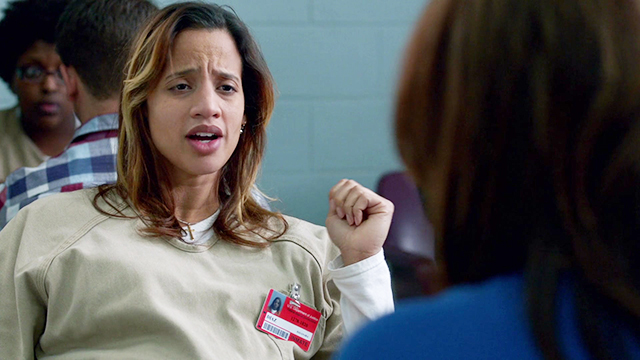 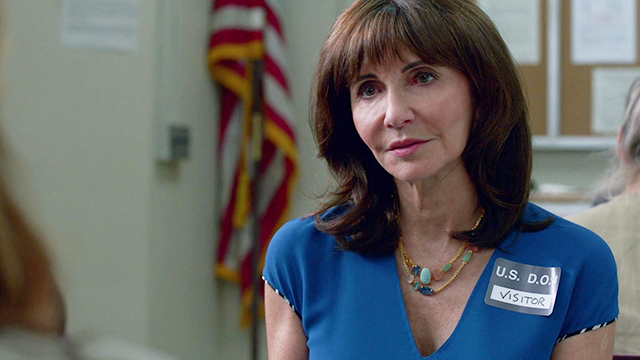 Do you want to name the child Verne?

Everybody’s gathered ’round the teevee to get the deets on where they’re gonna place Judy King, Queen of Strumpets and Quilts. Taystee’s just thrilled to have Poussey back, getting into it and leaning on her shoulder, far away from the increasingly unappealing band of Normaites. 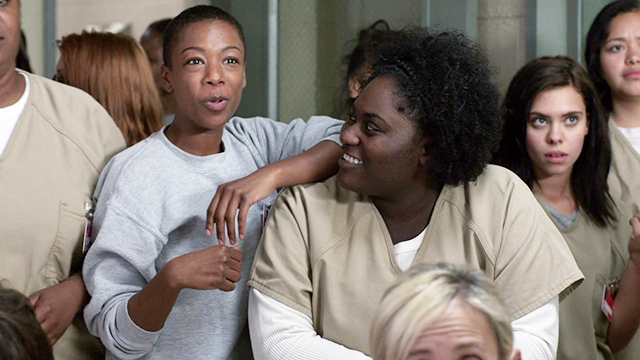 Poussey: Man, this whole Norma thing has been fucking up my sense of normalicy.
Black Cindy: Uh-uh, it’s “normalcy.”
Watson: I don’t think any of them is right.
Poussey: Nah, it’s definitely “normalicy.”
Black Cindy: Just say “normal.”
Taystee: Why don’t y’all just look it up!
Black Cindy: Can’t! Ain’t no dictionary!
Poussey: Alright, then, I’m just gonna live in my reality and you can live in yours.
Taystee: Aw, I missed you guys.

Hey hey, the crew’s all back together! Also, bad news: Judy King is going to Alderson. 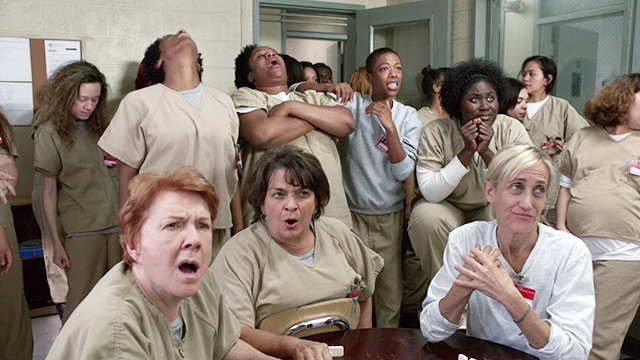 “Maybe if I just stand behind Watson and stare at the floor with my eyes lowered and don’t move a muscle, it’s like I’m not really even here.”

1. Stella’s parents moved to the US for a job but now they’re back in Australia.

2. Stella is an only child. 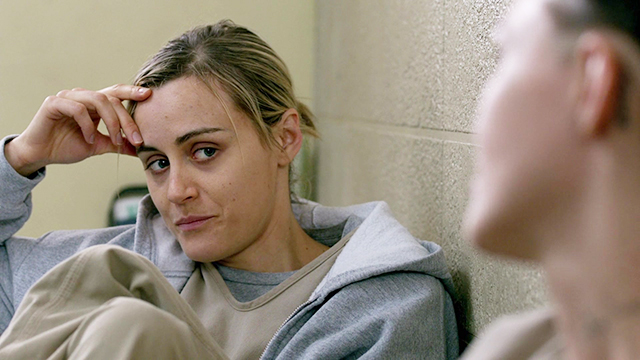 So is that a yes or a no on “do your parents ever mail you Vegemite?” 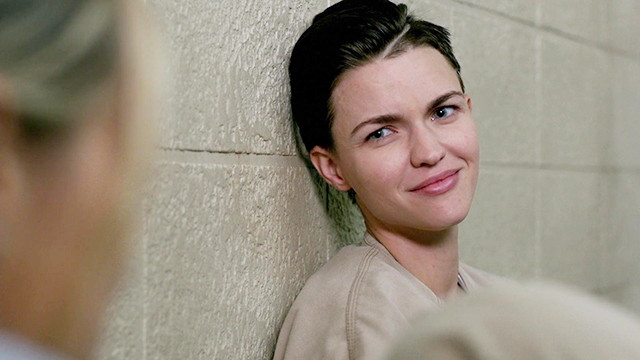 Piper asks if she misses her parents and Stella says, “I do.” That’s the moment when Alex Vause walks by.

Alex: “I do”? I know we’re all lesbians, but isn’t it awfully soon to be committing?
Piper: Shut up, Alex.
Alex: What? I can’t turn around without seeing Litchfield’s newest butt buddies.

This is the part of the season where Piper starts turning away from “a person who sometimes reminds you of the worst parts of yourself but in a way that can feel, at least, honest, if selfish,” into “somebody slowly taking on a kind of cold and hard monster virus.” Here she dares to be mad at Alex for, essentially, noticing that Piper’s been creeping around with Stella like flirtatious woodland creatures. 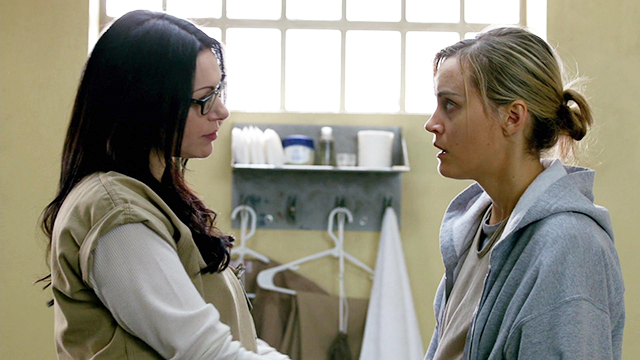 Tell me one thing you know about this chick besides that she’s hot and seems to be in DIVA magazine a lot. One thing.

After Alex “sees herself out,” Stella tells Piper that she shouldn’t have to put up with “that bullshit” and then they stick their tongues down each other’s throats. Oh! But first Piper says her and Alex have been through a lot together… but fails to mention that Piper got Alex locked up this time so she’d have somebody to hang out with.

Stella says Piper shouldn’t do anything out of obligation, only ‘cause she wants to, as if Piper hasn’t been living the “I do what I want” ethos, with mixed but mostly terrible results, for 2.5 seasons. Red happens to walk into the corridor as the two ladies are swapping spit, takes note, and dashses. 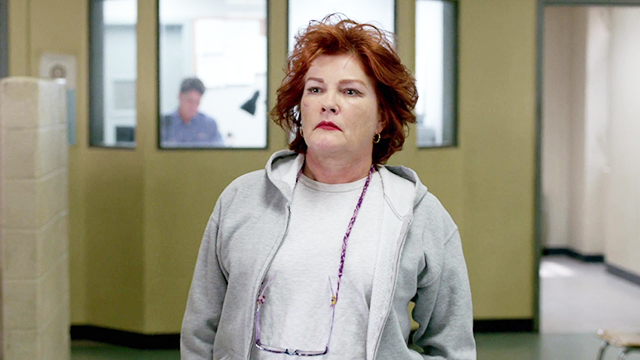 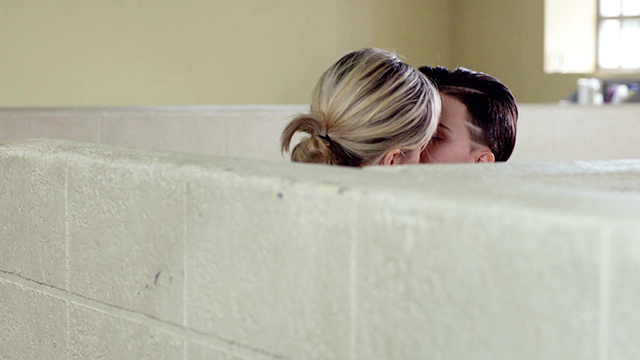 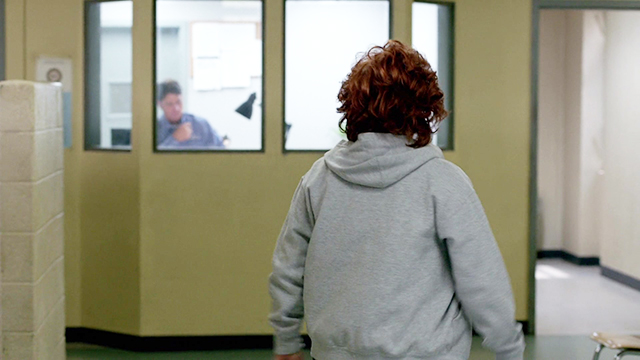 I will see myself out of this storyline, thank you

The rest of this episode contains a series of assaults, physical and sexual, so if you wanna avoid that, don’t go to the next page. As Grover would say, THERE IS A MONSTER AT THE END OF THIS BOOK.