This is when things ramp up and the episode gets dark and low, like now we’re in the underground bunker where everybody is inside-out and all their ugliest bits are right there on their skin for everybody to see.

So we’re split, here, between two bathroom scenes: in the first, Alex confronts Lolly, who she’s convinced has been sent here by Kubra to kill her. 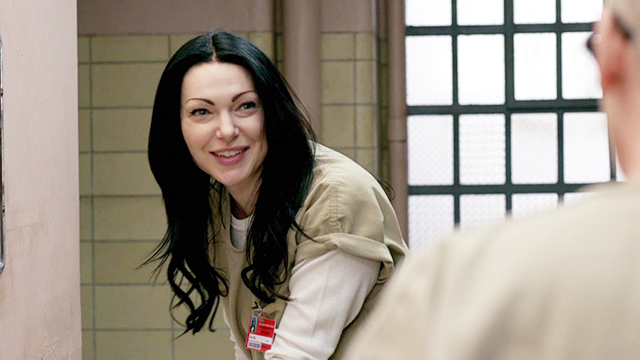 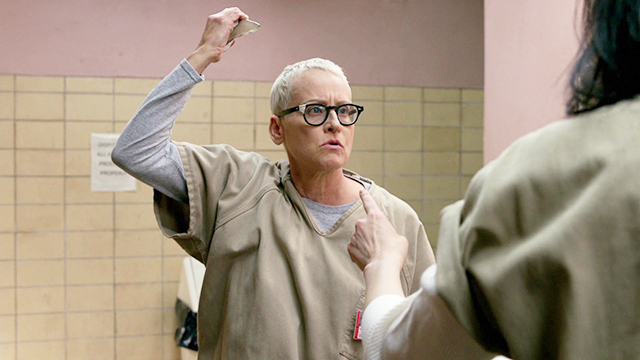 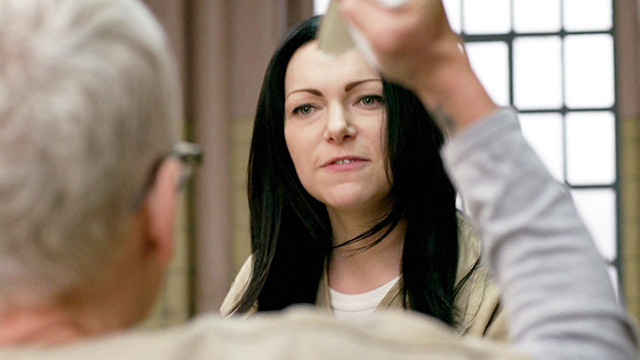 MONA IS NOT EVEN FUCKING DEAD.

In the second, Gloria and Aleida are confronting Sophia, because she’s in “their bathroom” and she’s been acting really out of character and it’s awful. 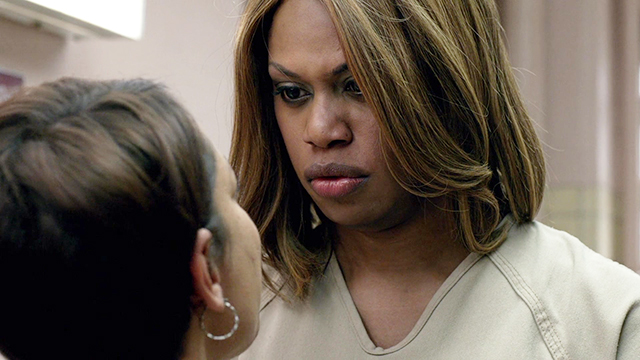 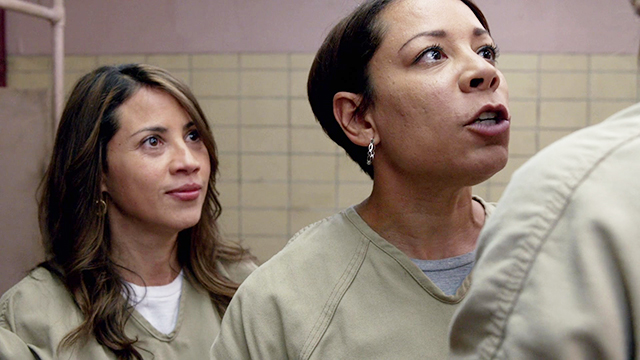 Aleida’s the one egging Gloria on but Gloria’s so torn up over losing access to her son that it’s not hard for her to take the bait.

Sophia: You have no idea who you’re messing with.
Gloria: No? Aren’t you the one who took Benny away from me even though he didn’t do nothin?
Sophia: You’re trippin’!
Gloria: No, I’m mothering. And I’m a ferocious, pissed off real mother but you wouldn’t know nothing about that, would you? Naaah. ‘Cause you ain’t nothing real.

It’s just so easy, right? You get mad at the trans woman and there you go, right next to you is a garbage bin full of jokes and insults and easy takedowns. It’s right next to the bin of recycled racial slurs that get slung around all day in here. So right there, at your disposal, the entire arsenal you need to rip somebody apart on grounds entirely unrelated to your personal disagreement with her at that time. But when Sophia pushes Gloria, Gloria hits the wall and collapses, and Sophia is instantly horrified and apologetic. 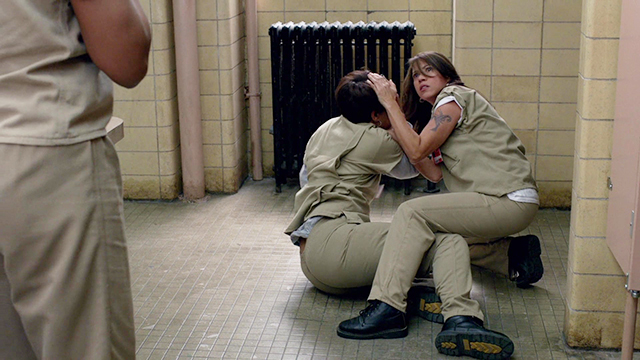 Here’s the thing, though: the Sophia we’ve followed through 2.5 seasons would’ve apologized to Gloria when she found out it was Michael’s fault the kids got in trouble, not Benny’s. Orange wants to tell a story about violence against trans women in prison, and so here it is, but the thing about violence against trans women in prison is that it doesn’t need a reason, it happens all the time for no reason. Trans women get beat up and raped in prison just for being trans women. Sure, plain ‘ol discrimination is not necessarily the stuff entertaining and complicated television is made of, but… is this?

In the other bathroom, Alex and Lolly are going at it but Alex can’t figure what Lolly’s talking about — terrorism, treason? The NSA? This woman cannot possibly be working for Kubra, can she? Lolly franticly assures Alex that she’ll work with Alex and tell her everything she wants to know, ’cause Alex is one of those NSA folks, right? So she’ll work with them if that’s what Alex wants she will! 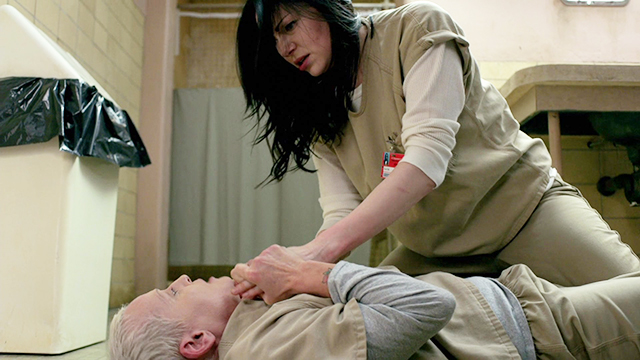 Dude, you are REALLY BAD at CPR

“Shit,” says Alex, exhaling into the vacant embrace of her own (justified) paranoia. Lolly is batshit crazy and thinks the NSA is after her. She’s got nothing to do with Kubra after all. Shit. 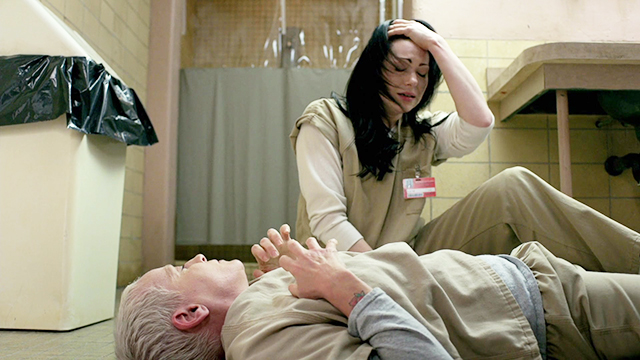 Shit, thinks Sophia as Aleida crouches by Gloria, still konked out on the floor. 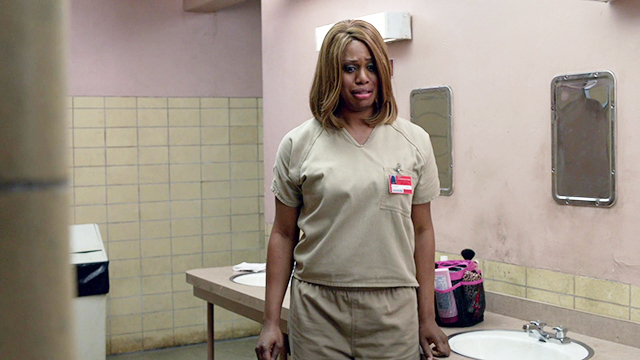 Shit. Morello’s new boyfriend shows up at Christopher’s to ensure he really never sets foot in another FedEx ever again. 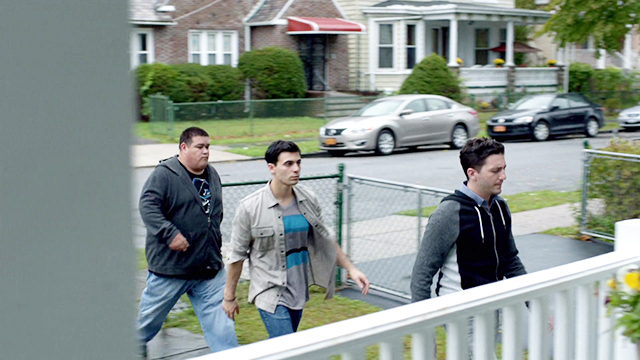 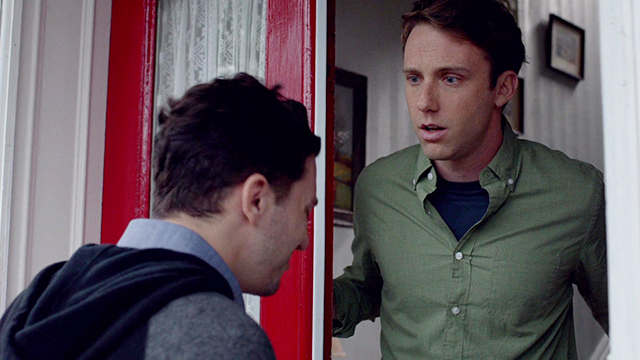 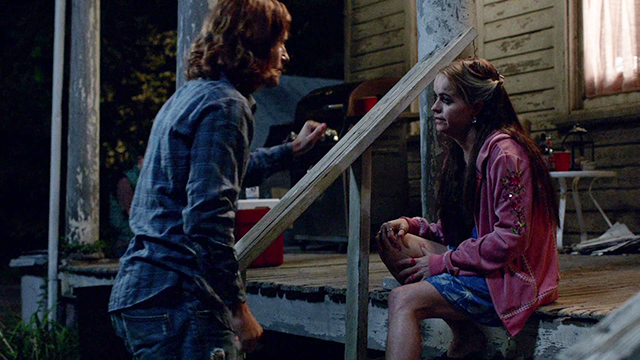 You know the rules. No boys allowed unless you got the password

So Tiffany says goodbye to her One True Love and trudges upstairs for a beer from the bathtub — but Abe’s not far behind, palming a six-pack of her favorite soda and a grudge from that time a small flying insect interrupted his fuck-session by injecting her with venom. He shuts the door behind them in the bathroom, and he’s gonna get it. 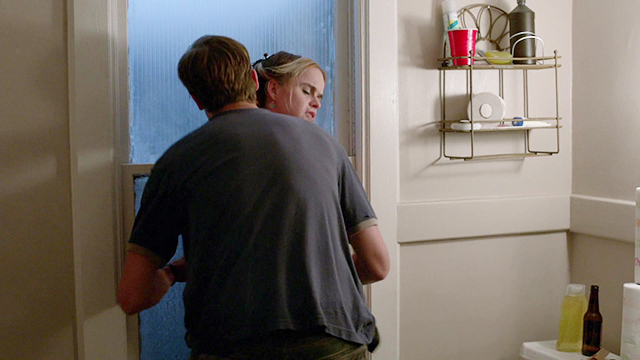 Her eyes go dead, her body goes slack. He rapes her. She becomes just a vessel waiting for him to finish with her, maybe already imagining it being over. Like a bee sting, except the scar he’ll leave is both deeper and more invisible than what any insect could ever do.

Back in the present day, Tiffany follows Coates outside, talking about rainbow sprinkles like he’s a Nathan and not an Abe. But he’s an Abe. Most men in Tiffany’s life are Abes. Like the addict in Season One who got her pregnant and suggested keeping the baby so they could get free baby food from the government and make it into casseroles, and then said he was too busy to take her to the abortion clinic. Like the guy who did drive her to the abortion clinic, and warned her not to use all his squirrel pellets when she reached for his rifle.

Is it any wonder she strode into prison in Season One with guns blazing, ready to strike first? Is it any wonder that the story we just got told is identical to the backstory of at least fifty other female addicts on Intervention? First comes scattershot parenting, then comes partying, then comes sexual assault, then comes addiction, violence, anger, numbness, a desire to prove oneself resilient and intimidating.

Coates: I got in trouble. I missed count yesterday because of our little detour. You told me we had enough time and I believed you.
Tiffany: Sorry. I didn’t realize you had to be back.
Coates: Well, now I’m on probation.
Tiffany: Oh that’s nothing, I can help you figure out when you gotta be back for count!
Coates: No, I don’t want any more help from you. All your help gets me is into trouble. 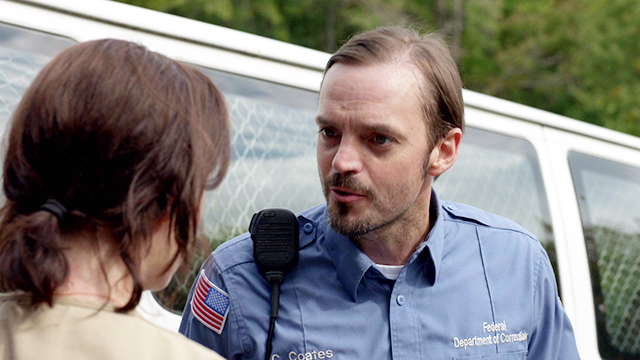 Yeah, that’s right, he told me only one of us could have a fancy mustache!

She reaches for him and he pushes her away, and then grabs her closer, asking “Is this what you want from me?” and no, it’s not, but things have turned before Tiffany’s mind has even caught up. She fights back, he lifts her and tosses her into the van, no fuck your mamas this time, but she is a small person and he is a larger, stronger person, and it doesn’t take long for him to subdue her. And her face is the face of resignation, to the thousands of Abes out there, to the fact that undoubtedly Coates has done this before and will do it again, that maybe he wants to keep this job so bad because it gives him the power over women he’s always craved. He’s a creep, a criminal, a rapist, and she’s a girl who’s good at following orders and just wants to be loved. Yet somehow he’s in a uniform given to people who police criminals, not people who are criminals. And there’s her cheek flush against the seats of their new vans.

He presses her face into the seat of the van and rapes her. He calls her Dogget. He says, “This is what you asked for, I love you, I love you.” And all we see is her face: her dead, sad, loveless eyes.

And that’s the end of the episode.

Rape is not an easy thing to portray onscreen, but that hasn’t stopped television writers from subjecting their viewers to it, often gratuitously. There are some ways that this is done: for television aimed at children or teenagers, like Degrassi or an after-school special, we usually get a cut-away. The viewer is shown enough to conclude that rape is about to happen, but the scene ends before we see it. Then there’s Game of Thrones, Queer as Folk or True Blood, where we’re forced to watch it play out, all bodies involved seen in full.

But here, in this show, we don’t see both bodies, we just see one sad face, and briefly. This isn’t about a sex act between two people, it’s about one person being attacked by another. “I always think there’s like a lineage of abuse,” Taryn Manning told Buzzfeed about her character’s relationship with her mother. “It’s always like, who’s the person who’s going to change the cycle, and clearly it wasn’t her mom.” When I read that I thought, you know, chances are very good that her Mom is a survivor too, but probably has never talked about it or even thought of herself in those terms.

This story is tough to stomach, but it’s also so real — and real in a way that we don’t see quite as often as we see those other stories about sexual assault. How she checks out so quickly, and accepts trauma as an inevitable element of being female. I feel uncomfortable declaring that her past assault “fit in” with her character as she’d been written until now, because I feel uncomfortable declaring that rape ever fits in with anybody’s story, even a fictional character’s. But of course it fits in to her story! Because it fits in with so many of our stories. Because sexual assault is, unfortunately, a part of who so many women are. Especially in prison: Bureau of Justice Statistics found 57.2% of females in state prison and 39% of federal inmates were had been sexually abused in the past. Women in prison are twice as likely as women in the general public to report childhood histories of physical or sexual abuse. Once they get into prison, the numbers get darker: although women comprise only seven percent of the state prison population, they’re 46% of sexual abuse victims, and males are the perpetrators in 98% of staff-on-inmate sexual assault cases. Daya and Bennett’s story is the anomaly here. Tiffany and Coates’ story? That’s real. That’s awful and disgusting and so very real.