Chang takes her Frito/pea cakes outside and eats them while watching everyone else hang out with their prison families. And then she heads on over to the shed to watch her stories on her Samsung Galaxy S6 and treat herself to a single orange from her stash. Where did she get that thing? The phone, I mean. More importantly, though, how does she charge it? How did Blanca charge her phone, come to think of it? That’s going to drive me crazy. 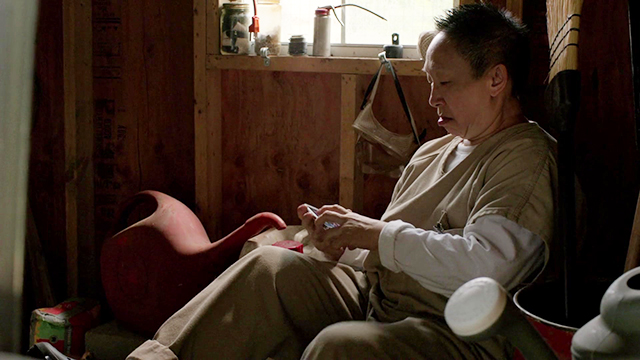 Dumb asses. Aria is A!

Flashback! Chang’s brother’s shop is in bad shape, so he decides to get into the business of contraband. He doesn’t want to make a drop, though, and neither do his buddies, so he recruits Chang to do it because he says she’s invisible and no one’s going to notice what illegal shenanigans she gets up to.

In real-time in the Panty Shoppe, Black Cindy and Janae wrestle with their sewing while Flaca continues to read the catalog. She’s says she’s like The Flash with sewing, so she’s saving it all up to hammer out at the end of the day. 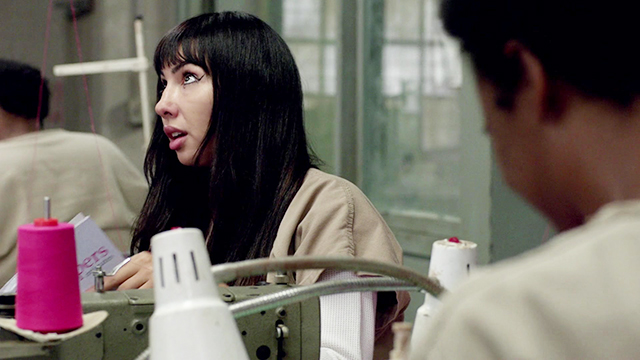 Is that a drone?

Janae: What page do you have to get to before you see a Spanish girl?
Flaca: If you’re talking about Latinas, there’s like 20 different countries that all look different. See this blonde chick here? She could be Latina. You don’t know.
Janae: [disbelieving look]
Black Cindy: Let me see. Eh, she probably ain’t, though.
Flaca: Yeah, probably not. Man, I gotta start running or something.
Janae: I ran all the time and boys just thought I was weird. 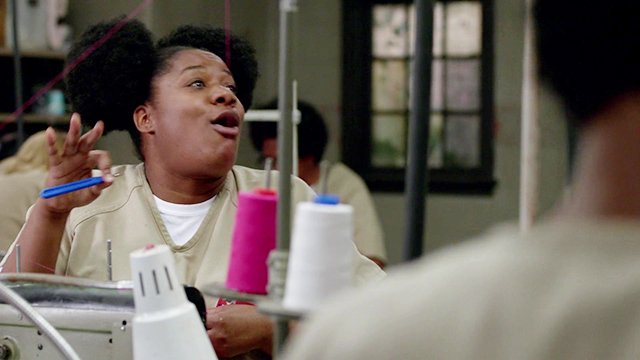 To wit, Piper and Stella are talking about how hard Piper’s life is, what with looking the way she does and being able to afford hundred-dollar underwear when she’s not in jail for being a drug mule. Stella’s mouth invites Piper to check her privilege for a second, but Piper declines that invitation. Stella’s body language invites Piper to her pants party, and Piper sticks that one in her back pocket. 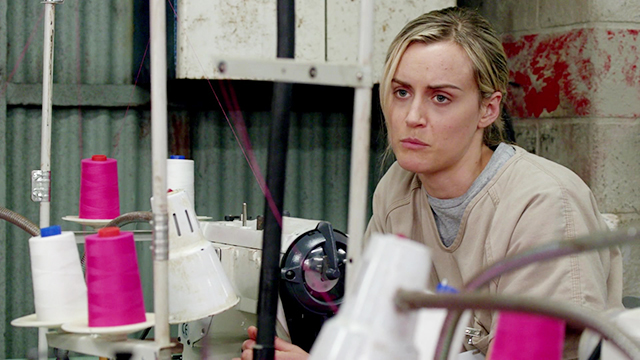 Australia is so weird. What even is a platypus? Is it a duck or is it a beaver? 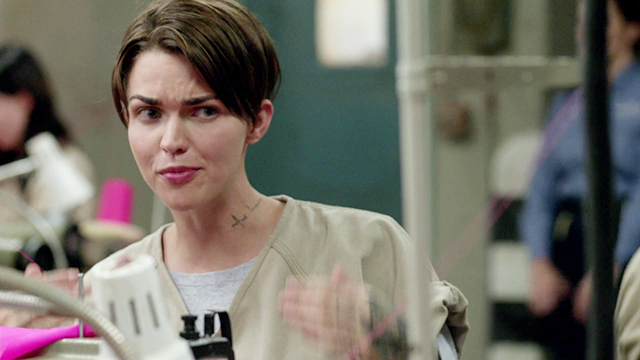 Maybe it evolved to challenge your binary assumptions.

She also sticks some extra Panty Shoppe fabric in her back pocket and a photo of one of the models from the catalog for Alex.

Gloria dips into Sophia’s shop for a late afternoon haircut. She says she doesn’t want any birdcages or sass or anything like that. Just a trim to keep her from being noticed. Sophia says she feels that, but Gloria doesn’t think she does. 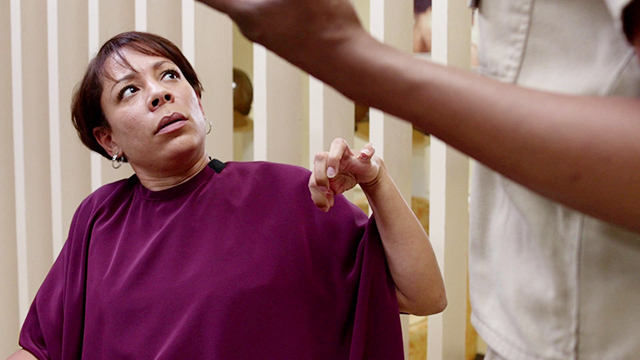 Carli Lloyd scored a hat trick in the first half?! 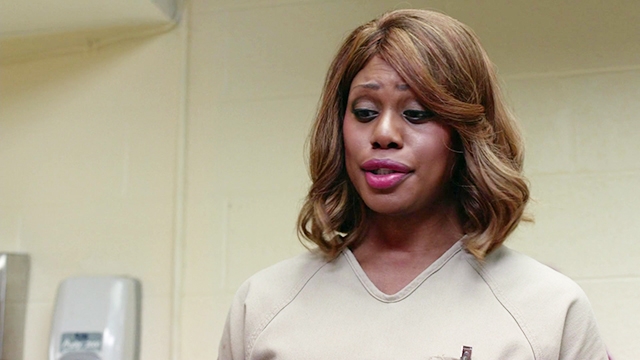 She scored it in the first 20 minutes!

Gloria: Really? ‘Cause you’re doing the opposite. You’ve got this whole thing going on. The hair, the makeup. I mean, who has the energy to go full M.A.C. counter every day?
Sophia: Listen, after everything I went through to be me, I ain’t gonna let shit slide.
Gloria: Yeah, but you all up in our face with it, like blown out and shit. Look, if you wanted to look like a real woman, you would let your roots grow out and get some bags under your eyes.
Sophia: You know, historically? Mean and reality: not friends.

Okay, for starters, the idea that Sophia is all up in anyone’s face is hilarious since she seems to exist only inside this salon. Maybe she’s on a whole other show inside here and we don’t even know about it. Maybe she hangs out with Stella in here and they eat contraband cookies and talk shit about Piper. Maybe she keeps Stella’s buzz fresh and Stella teaches her Australian swear words. I would watch that show.

Sophia agrees to let Gloria’s kid ride with her wife and son to visit sometimes. 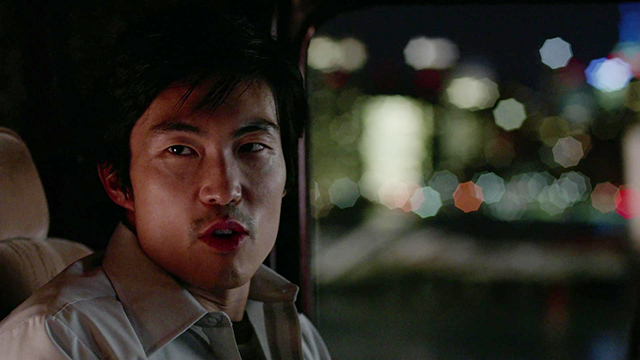 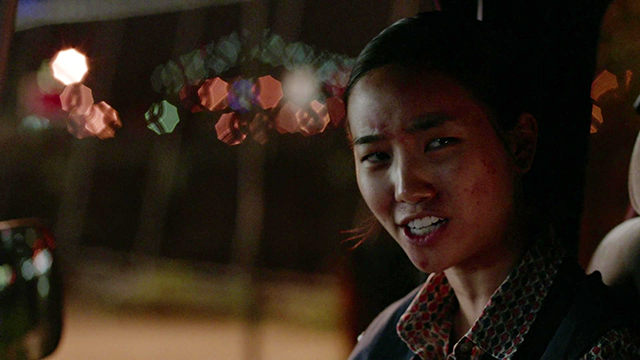 Flashback! At the drop-off, Chang and Fu chat happily about the wonders of ’80s pop culture until Fu harshes Chang’s buzz by bringing up his super tall, super thin, super blonde American girlfriend. The Korean rare goods dealers further harsh Chang’s buzz by trying to pass off ping pong balls as turtle eggs. A full-on martial arts battle breaks out because this episode didn’t meet an Asian stereotype it didn’t go all in on, and Chang ends up saving Fu’s life by walloping one of the Korean guys in the head with a tire iron. Fu pledges to pay Chang back by giving her literally anything she wants.

What Chang wants is for Fu & Co. to drag the asshole who agreed to buy her as a bride but then backed out to their warehouse and beat the smugness out of him. They do beat him, but they do not succeed at eradicating the smugness. He keeps hurling insults out Chang out of his bloody mouth. 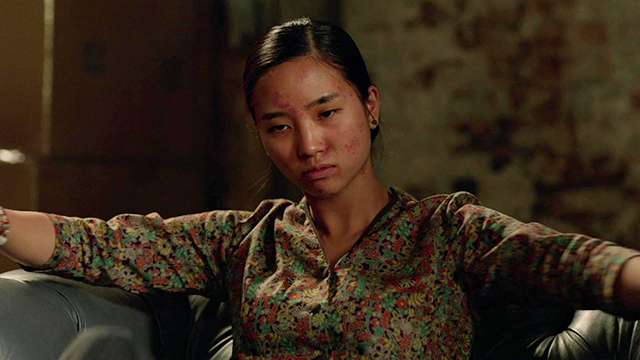 *taught Don Draper how to sit like a boss*

In real-time, it’s drama class and Sister Ingalls is acting out Chang’s script. She bludgeons the Fu in the story and while the rest of the class is freaked out, Suzanne is ecstatic. She loves it! Chang shrugs about how that’s Hollywood, and bounces.

At dinner, Black Cindy enjoys a delicious kosher meal, courtesy of Lolly’s hot tip, while Poussey and Taystee work out their feelings about the squirrel. Taystee wants Poussey to cut way back on the hooch and maybe even come to AA with her, even though Poussey says Taystee only goes to AA so she can have a platform to tell crazy stories that aren’t true. Taystee loves Poussey, and Poussey knows it, but she needs a different kind of love, a love-love kind of a love; Poussey needs a real girlfriend. Taystee smiles sadly. She agrees. She’s known it all along. 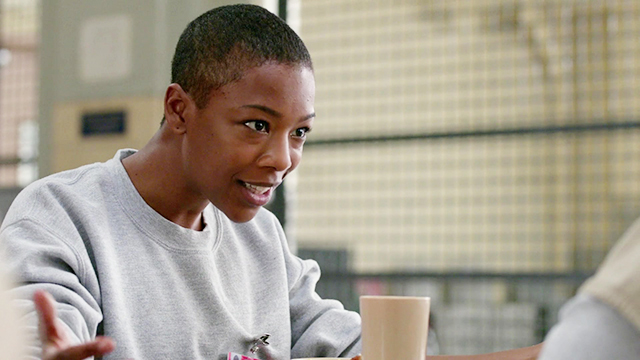 If Mary had Jesus and Jesus was the Lamb of God, Mary had a little lamb. 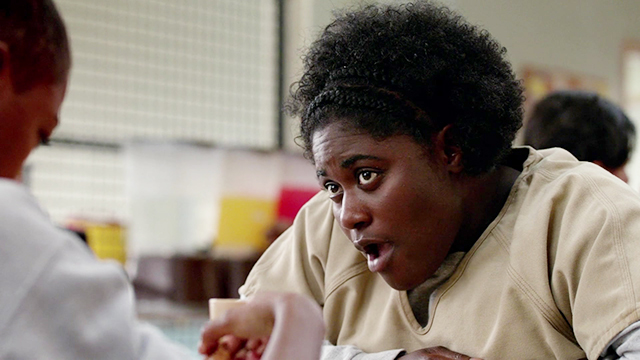 Piper tries on her new underoos and Chang clowns on her, so Piper apologizes for being a jerk earlier that morning and Chang accepts. She says, “Thank you, lesbian.”

Flashback! The guy who ridiculed Chang is now lying bloody on the warehouse floor. He yells at her some more about how she’s ugly, so Chang tells Fu to cut out his gall bladder, and then she swaggers her bad ass right out the door while that motherfucker screams and screams. 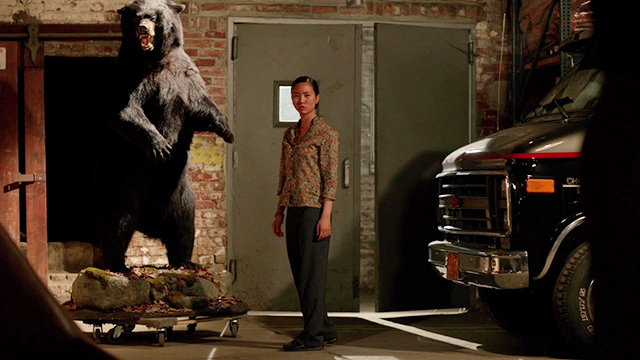 You don’t deserve my tears, I guess that’s why they ain’t here.

Speaking of motherfuckers, Healey does Red a solid and gets Caputo to sign her back into service in the kitchen. She walks up in there to the sound of Bikini Kill’s “Rebel Girl” and everyone nearly faints dead away. Everyone except for Norma. She grabs Red’s apron and wraps it around her like a cloak on a queen.

Next page: The roundtable!