If you’ve yet to watch One Mississippi, do it now, maybe even do it before you read this review, which contains spoilers. Season Two debuted on Amazon Prime yesterday, there’s only six 25-minute episodes per season, and it is truly a gift you could give yourself.

In Season One of One Mississippi, Tig, her brother Remy and her stepfather, Bill, are reeling from the death of Tig’s mother, which happens just after Tig’s survived breast cancer treatment and a near-death experience with C. Diff Colitis. She’s wrecked, emotionally and physically, while Remy maintains his dopey aimlessness and Bill; his uptight fussiness. The stages of grief defy their implied order, estranged family members are thrust into emotionally heightened close quarters, and the living take a reluctant, numb, desperate inventory of their own lives. These are three humans with very little in common, and now that Mom’s dead, they’re technically not even related, as Bill informs them with trademark detachment in the pilot episode. Throughout Season One, they handle, in their own bizarre and often hilarious ways, the inevitable post-death avalanche of exposed family secrets, the cruelly sterile logistical arrangements and, of course, the wondering where to go from here. In her poem “The Thing Is,” Ellen Bass calls this post-loss state of existence “an obesity of grief,” continuing:

You think, How can a body withstand this?
Then you hold life like a face
between your palms, a plain face,
no charming smile, no violet eyes,
and you say, yes, I will take you
I will love you, again.

This is where we find ourselves at the start of Season Two: Tig has decided to quit Los Angeles and remain in Mississippi and, along with her family, she’s picking up the impossible pieces, looking life right in its stupid mean eyeballs, deciding, “yes, I will take you. I will love you, again.” It’s a heavy premise for a comedy, but if anybody can pull that off, it’s Tig Notaro, whose fame-meter exploded after a stand-up set that managed to extract genuine humor from unspeakable tragedy. That signature is all over this show, co-created with Diablo Cody.

Over the course of Season Two, One Mississippi invokes a laundry list of hot topics usually pummeled to a bloody pulp in mainstream television ― sexual assault, institutionalized racism, homophobia, misogyny, sexual harassment, childhood trauma, and the brutal history of the American south. But it does so with precise care, trusting itself and the audience to catch on without a heavy hand pushing them forward.

The result is a story that acknowledges the present moment without leaning on it too hard, or exploiting it. It’s whimsical and fresh and progressive and tender in parts and hopeful in other parts and compelling throughout. I laughed, I cried, I wanted more, I even cared about the heterosexuals. It’s not escapism because it’s way too real, but it’s precisely the best any of us could possibly do under the circumstances. Tig, a liberal masculine-of-center lesbian in a deeply Red State, butts up against conservatism and a hush-hush approach to conflict and despair on every level, but does so with humor and resilience. By grounding her show in Mississippi, the “other side” referred to hypothetically by city dwellers aren’t mysterious boogeymen or relatives you only see at Christmas; they’re the relatives you see every day and the receptionist at the local hospital. Tig knows this landscape — she grew up in Mississippi and Texas.

If Season One was the aftermath, Season Two is the rebuild, and all three protagonists are given meaningful romantic arcs. These are bizarre, unconventional people, the types of humans that terrify mainstream television and delight streaming networks, who have become, despite intense corporate affiliations, something like what indie film was during its ’90s peak. Shows like One Mississippi, Transparent, Take My Wife, Orange is the New Black and Master of None give us refreshingly authentic queer narratives driven by actual queer people behind the camera, and in the process they manage to summon more compelling heterosexual stories, too.

What does love actually look like, what constitutes a “good fit,” and who’s entitled to it? Are we drawn together by what we like, what we do, what labels we use to describe ourselves? Or is it a complementary sense of humor, a similar set of quirks, not what we do in the world but how we see the world and our place in it? All three attempt to navigate Tig’s recent and ongoing disclosure that she was sexually molested by Bill’s father as a child, which was witnessed by Remy and unknown to her parents. Throughout the season, I’m reminded again and again of that earworm of a line in the 1994 musical Rent, I’m looking for baggage that goes with mine. In these wry, self-conscious, self-styled universes, we learn that love isn’t enough, that loving someone and making a life with them are entirely separate spheres. But there’s a freedom there, too, because the relationships that emerge from accepting uncertainty offer difference as an opportunity for growth and education, for discovering new things about yourself and the world. 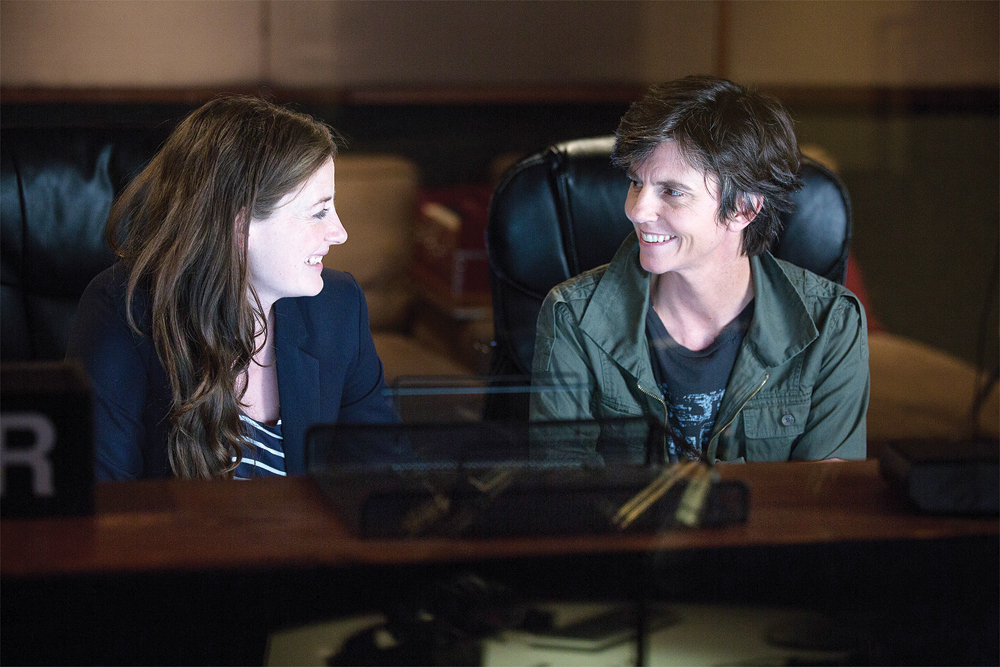 Tig’s love story in One Mississippi is, of course, the one with Kate, the now co-host of her radio show played by her real-life wife and One Mississippi co-writer, Stephanie Allynne. Like Allynne was, Kate is ostensibly straight but also falling for Tig and not sure what to do with those feelings. (One valiant attempt involves, of course, watching The L Word.) Tig’s attempts to date women other than Kate are dates that make plain what she doesn’t want. Although the straight girl / lesbian love story is a trope as old as time, One Mississippi breathes new life into it, perhaps because it is based on an actual story, with details that feel real because they are. Its process is determined by the personalities of the two women involved, rather than by the standard tropes.

Meanwhile, Bill begins dating Felicia, an African-American insurance agent who works in his building and shares a similar appreciation for rules, order, and being practical. Their attraction has a Michael Scott / Holly Flax vibe — their quirks and compulsions are entirely out of sync with the rest of society, and yet they have found each other, which means there is hope for us all! When she calls him out for honoring the portrait of a wealthy female slaveowner showcased on a restaurant wall, he promptly begins educating himself in just absolute earnest, listening to “The New Jim Crow” on audiotape next to a buzzworthy stack that includes Ta-Nehisi Coates, Angela Davis and The American Slave Coast. The ensuing story is one of many places where this tension around revisionist Southern histories is seamlessly addressed, a topic that’s gotten even more relevant since shooting wrapped on One Mississippi. This happens several times in One Mississippi — women butt up against white cis men who’ve never had to question their position in the world or the oppression of those less privileged, and are pushed to re-examine that comfortable ignorance. But what makes it work is that these topics aren’t shoehorned in; they’re part of genuine character development, and nobody gets a pat on the back for just being decent.

Honestly, after spending last week immersed in Ryan Murphy’s latest foray into lesbian representation and political commentary, American Horror Story: Cult, I needed this. Putting women in charge of telling their own damn stories: it works.