One Million Moms are giving moms everywhere a bad name. First they tried to organize a boycott against JCPenney for hiring Ellen as their spokeswoman. As if hating on the most lovable person on television (sorry, Oprah) wasn’t bad enough, they proceeded to suck by failing to actually get anyone on board. I don’t know about you, but my mom knows that rounding 46,000 up to the nearest million is bad effing math.

Now they’re hard at work TAKING ACTION against Urban Outfitters for publishing a picture of two women kissing in their April catalogue. 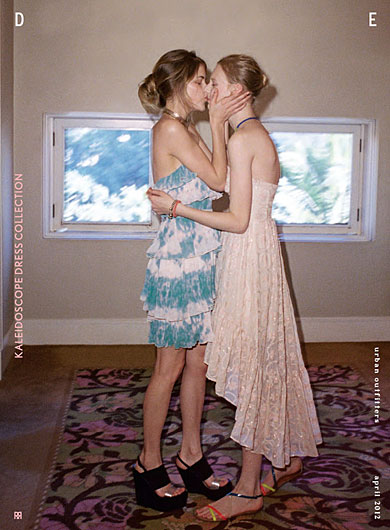 Can you blame them? Look at that filth. No self-respecting gay lady would kiss another girl so indifferently. There is only one place where a fist is acceptable in a romantic situation and that place is not “balled up against your activity partner’s back so that you don’t really have to touch her.” If somebody kissed me like that, I’d have to try really hard not to punch them in the face (because “in a violent confrontation” is also not the correct place for fists to make a guest appearance).

While the Million Moms are worried about what these kinds of images can do to children, they don’t seem nearly as concerned as I am about the proper sexual development of our next generation of baby dykes.

“WARNING! The April 2012 catalog from Urban Outfitters has begun arriving in home mailboxes the last couple of days. On page two of this catalog is a picture of two women kissing in a face holding embrace! The ad and catalog are clearly geared toward teenagers.

Before your child has a chance to read the newest Urban Outfitters catalog call to unsubscribe from their mailing list at 1-800-282-2200, and then throw it away…The content is offensive and inappropriate for a teen who is the company’s target customer.”

In all honestly, though, the irony of an anti-gay group going after a company run by a notoriously anti-gay C.E.O. is just a little too much to stomach. Co-founder Richard Hayes made headlines last year after getting blasted on twitter by Miley Cyrus (God bless the children) for donating $13,000 to the Santorum campaign. Since then, Urban Outfitters’ revenue margins have fallen and analysts’ expectations have dropped, putting the once-prominent company in a new and not altogether comfortable position. More recently, lawsuits over a line of “Navajo” underwear, flasks and other novelties brought the company back under scrutiny and caused some customers to question the integrity of a store they thought shared their values.

Which brings us back to the real problem with the photo: money. After all the bad press, Urban’s got to do something to bring wayward teen and twenty-something customers back into their stores. Rebranding isn’t an option; the attention span of their demographic isn’t nearly long enough to warrant an expensive makeover. Instead, it looks like they’ve opted to stir up some free press with one innocuous — and calculated — photo.

While I’ve managed to get over my shock that queers have been deemed a group worthy of pandering to, I’m not sure if I’m down with the way Urban Outfitters is doing it. While JCPenney’s C.E.O. stood “squarely behind” Ellen during the attack of the Million Moms, so far the Urban team’s plan seems to consist of sitting quietly on the sidelines while the Internet comes to the conclusion that there’s nothing wrong with a picture of two girls kissing. Ultimately, moms aren’t really the people Urban needs to win over; if anything, being disapproved of might help them appear “edgy” to the demographic they’re trying to reach. It doesn’t seem likely that the backlash will really hurt Urban’s sales or image at all. At the very least, it won’t be nearly as hurtful as the pervasive othering of same-sex relationships that allows that picture to be considered “edgy” to begin with.