As you’re probably aware and perhaps have read about here, there has been quite a skerfuffle brewing regarding JCPenney’s decision to hire Known Homosexual Ellen DeGeneres to be their “spokesperson,” because DUH Ellen is WAY cooler than JCPenney, she should spokesperson Sears instead. Just kidding! It’s because she’s gay and some people can’t handle it.

Conservative group The Million Moms, an army put together by traditional valuespeople to protect themselves if The Million Lesbians ever attack, wanted JCPenney to drop Ellen as a spokesperson.

Unfortunately, JC Penney is not a bigoted idiot and clearly has some market research revealing that more people are cool with homosexuality than with douchebaggery. Therefore, they stood their ground.

Today on her fabulously popular television show, Ellen addressed the issue and spoke frankly about Prop 8, being gay, and all that smacktalk on Million Moms’ facebook page. It was a shining moment for women and a sparkling glittery moment for all of queer women pride.

Sidenote: Anyone intensely interested in marketing and business stuff, like me, would be interested to know that JCPenney is hoping Ellen will rehabilitate their “stodgy” image, as their sales have been suffering lately. They’re gonna be overhauling the price structure, re-designing the logo and turning its stores into smaller speciality stores that will showcase brands “like Martha Stewart.”

Ellen does seem like a good pick — she’s very conservative and eminently like-able in terms of her personality — she’s careful never to offend people, and she makes herself very difficult to dislike. Therefore people feel safe with her, but because she rocks this very distinct hipster-prep-boi-style, is a lesbian and is married to Portia De Rossi, she’s also seen as edgy or “cool.” 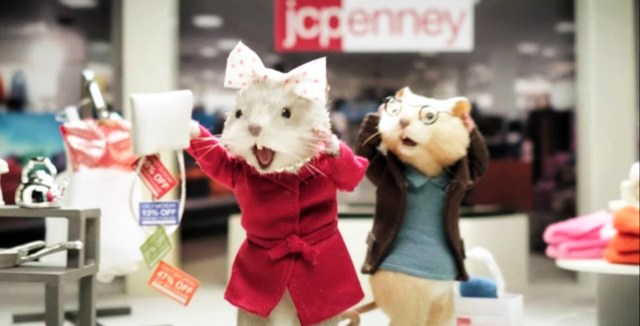 Here’s the cute part: Ellen DeGeneres worked at JCPenneys in Louisiana in the 1970s when she was a teenager! Here’s what she has to say about the deal:

What’s interesting actually is that as a kid, most of our clothes were hand-me-downs or used clothes, but when we got new clothes it was ALWAYS at JCPenney. They also had a fantastic catalog which I’d leaf through and pick hypothetical gifts for my friends and family for fun, I guess. From BusinessWeek:

Penney is banking on DeGeneres’ down-to-earth humor and big daytime TV following to bring customers in stores to see the changes it is making — and explain them.

“I think Ellen is someone we all trust. She’s loveable, likeable, honest and funny, but at her soul, we trust her,” Johnson told The Associated Press.

DeGeneres, who is also a spokesperson for Cover Girl, will appear in five commercials, whose details are mostly under wraps. But one ad spotlights DeGeneres, usually dressed in pants, wearing a dress.