Previously on the show that promised us a bisexual character and then gave her virtually no screen time, Regina wiped Emma and Henry’s memories of Storybrooke, thus saving them from a reversal curse put in place by Pan. They live happily ever after in a suspiciously expensive apartment in New York City, where Hook has somehow tracked them down and hoped that his true love’s kiss will give Emma her memories back. Womp womp, it’s not effective.

This episode opens on the words “one year ago”, because why write a narrative that’s in temporal order when you could confuse the bajeesus out of your audience? Prince Philip’s galloping back to the old homestead, which in this case is literally a poured concrete gazebo in the middle of a field. By all means, OUAT producers, film this episode at the picnic and day-use pavilion of your local park. While you’re at it, why not film the castle scenes on the playground? I probably won’t be able to tell the difference. Also, setting garbage cans on fire ain’t gonna heat your wall-less house, kids. 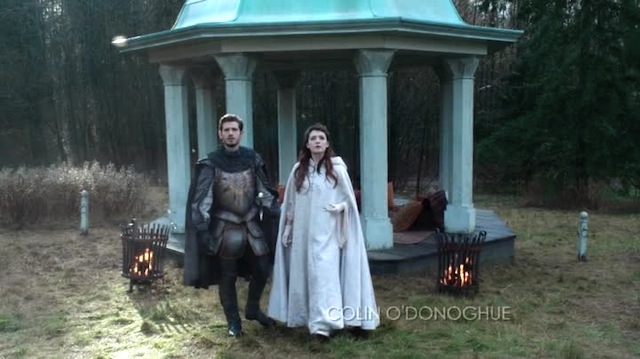 We’re planning on giving birth over in the picnic table area, or maybe near the rusting slide on the playground.

Aurora, or The Princess Formerly Known As Sleeping Beauty, makes a comment about being hungry and angry, aka “hangry”, because she’s pregnant. Don’t worry, folks. She only looks 16. I’m sure she’s a much more mature age, like 17 or 18. Before you can be concerned by the fact that every biological parent on this show gave birth before the age of 21,  the Storybrookers show up.

Now, let’s real quick make a note of why I think this show is so gay that it hurts. If I told you that a purple glittering cloud had appeared, and out of it stepped someone in a ridiculous wig, knee-high boots, and an overdone costume, you might think I was talking about my favorite local drag queen. I mean, come on. The amount of laceable leather accessories in this episode alone should be proof that there is something queer afoot. Alas, we know better than to dream. 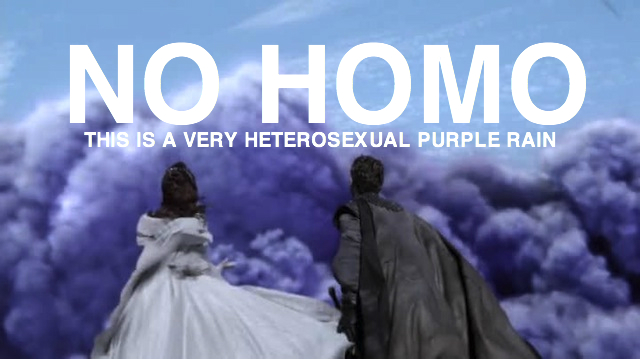 What did I say about ridiculous wigs though? We’re back to that twenty four seven, three hundred sixty five days a year wig lifestyle. They grow ’em long and knotty in the Land of Fairytales. 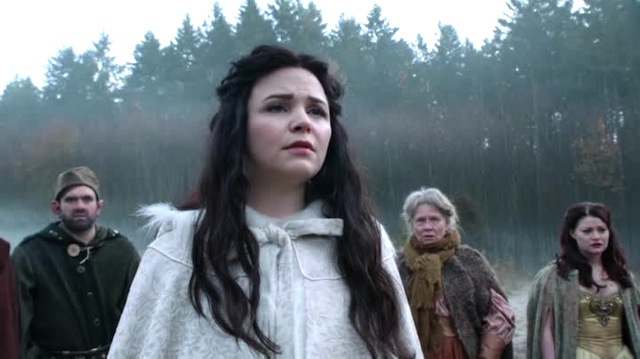 Why yes, a nest of rats DID drown on my head. 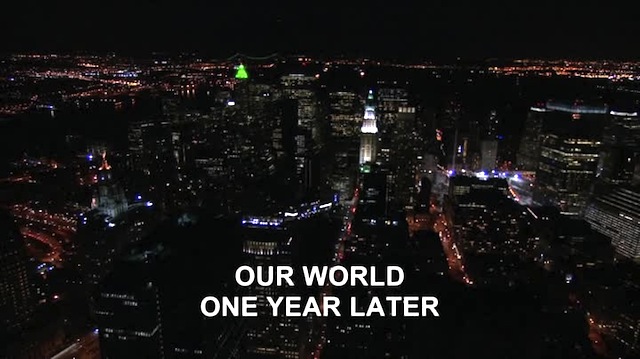 Emma Swan is wearing a dress and heels and not walking like a linebacker in them, so I guess Regina’s spell also graced Emma with Regina’s ability to move in lady outfits. Other fun fact: Emma is on a date with a dude. It’s too bad Snow isn’t here to crap herself, since setting her daughter up with mediocre male partners was Snow’s greatest purpose. I guess invading Emma’s personal life only counts when there’s a much more important crisis at hand. Anyway, Emma seems predictably blah about this dude, as she is predictably blah about everyone that the writers keep shoving into her arms. Homegirl just wants to hunt bounty and play Diablo, okay? Stop trying to find some dude to slobber on her boobs. 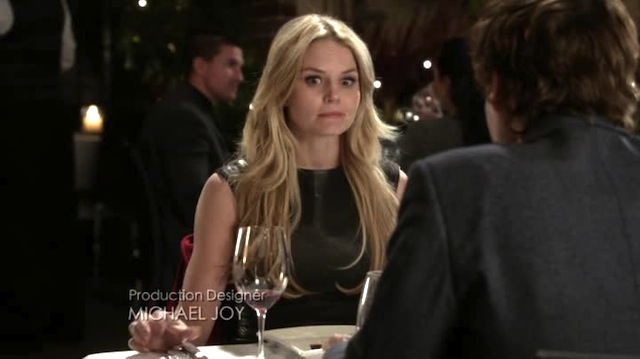 When this dude Graham gets up to fling poop at the waiter, he is immediately replaced, musical chairs-style, by Hook. Okay, this is New York City, right? A strange man in eyeliner, possibly an unwashed cosplayer, possibly a serial killer, shows up at your house and kisses you, then he shows up at your date night. Why do you not call the cops IMMEDIATELY? Has she never seen SVU? Does she not know that stalkers are, like, a thing that needs to be dealt with swiftly? I know she’s a bounty hunter and all but the amount of time she entertains a complete stranger in a weird outfit telling her that her parents are alive and that she has a frigging super power is craaaazy. 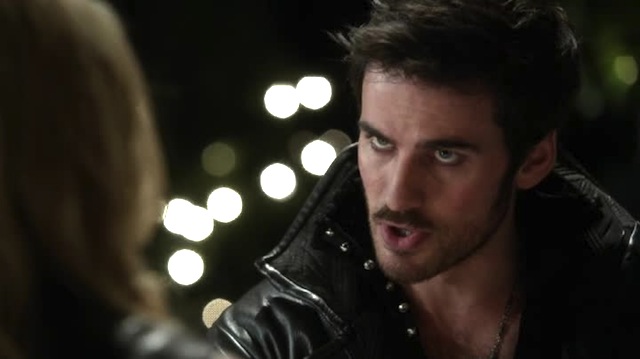 He gives her an address to go to if she “wants to learn the truth”, which us SVU-watching folk know is creepy guy talk for “here is a place to go where I may or may not murder you, it’s definitely a safe bet that something unsafe will happen at this locale.” Yet we all know Emma is going to put on her scrunchy face and skip on over to this address at some point in the episode, even though she is a person who supposedly hunts down dangerous humans for a living. I don’t know what I expect anymore.

Back in one year ago but also another dimension, the Storybrookers are catching up with Aurora and Philip, namely to talk about babies and gape at Regina’s cleavage. No one brings up the fact that the two kids are living in a gazebo surrounded by burning trash, so I guess this is normal everyday Fairytale Land stuff. Snow says they’re going to head back to the castle, and Regina will come with them because this will give everyone hope, this whole “my beloved leaders have now teamed up with an evil dictator, how could this possibly go wrong in my tortured peasant eyes?” thing. Regina was born at night but not last night, so she can see what a stupid idea this is. Of course, no one listens to Regina because the whole point of this show is to discount her actions and motives in favor of whatever convoluted morality lesson they’re addressing this week. 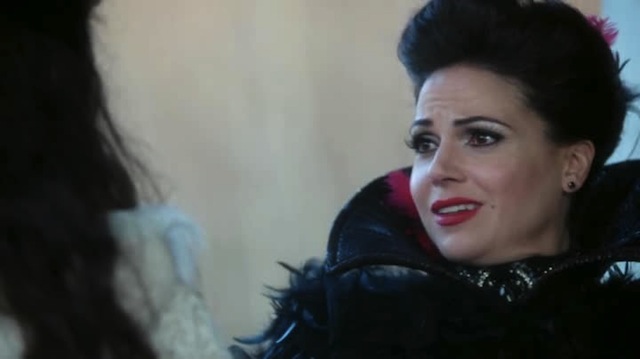 Yes, I’m sure all these “medieval-era Eurocentric peasants” will loooooove a QWOC back in the castle.

Aurora and Philip get all shifty about pronouns and refer to a mysterious female presence who may punish them for not informing her of the newbs’ arrival. They decide to be shady because otherwise the mysterious female presence will punish their baby? Yo, that thing has a lot more time to cook, I don’t think you need to be worried about the mysterious female presence placing your baby into, say, a tree trunk that doubles as a portal? At any rate, they’re gonna go ahead and not tell the newbs the helpful information they need, which is pretty shitty of them. You dodged a bullet there, Mulan. Go find your hot deserving lover offscreen, Mulan. Lord Walt Disney knows we’re not gonna see it onscreen any time soon. 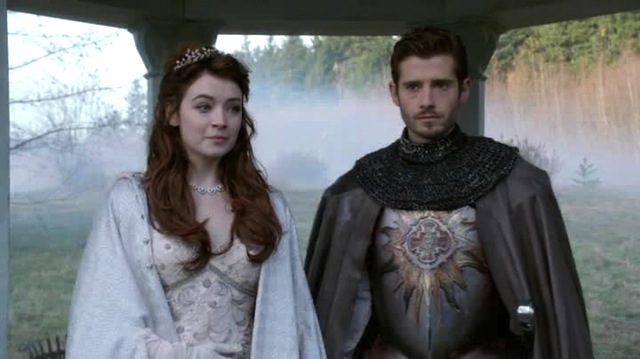 Back at the date that has already taken up too much of this episode — seriously I am looking for ways out at this point — Graham orders a banana split with a diamond ring. Whoa, back up. Y’all have been dating for eight months? Now is not the time to put a ring on it, Graham. Marriage is not something you can just monkey around with! Last I checked, y’all weren’t a pair of lesbians with a mutually owned cat. Emma is about as on the fence about this proposal as I am with Justin Bieber and Selena Gomez getting back together — Are they ready for it? Is Justin still clinging to Selena because she’s the only solid relationship he’s known? Is Selena enabling him? So. Torn. About. This. 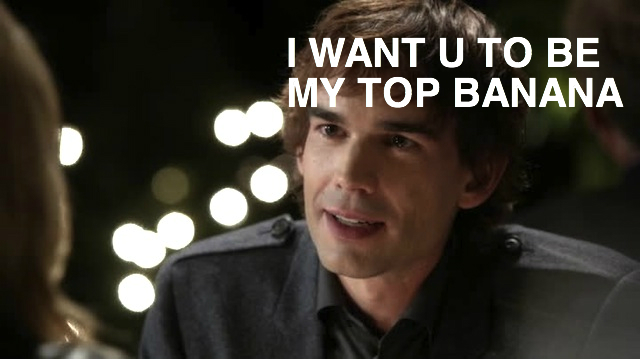 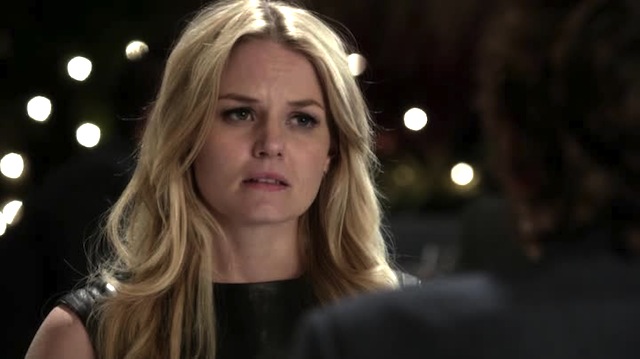