Look, I don’t like this any more than you do.

In last week’s No Filter, we posited the (semi-substantiated) theory that Carrie Brownstein and Abbi Jacobson were dating one another – a theory widely noted across the internet, because by generally accepted standards, there is no tangible proof. Carrie and Abbi have not explicitly acknowledged the nature of their relationship in a way that we generally expect celebrities to. They have not made a statement or been photographed walking hand-in-hand through the Gelson’s spaghetti sauce aisle. We here at Vapid Fluff HQ stand by our declaration because of corroboration from trustworthy sources in Portland, but without social media confirmation it’s difficult to definitively prove such things to the world at large. So how do we know when a pair of celebrities are dating? How can we be sure that two women walking next to each other on the street are girlfriends or gal pals or just walking into the same coffee shop at the same time?

This leads us to the conundrum of the hour: Kristen Stewart and Annie Clark.

Here’s what we know:

It seems that the once-lauded relationship between “tangle of kinetic limbs” Cara Delevingne and ethereal beam of unwavering light Annie Clark has come to an end. This particular pairing frankly never made much sense to us, but they’d been very open about how in love they were and seemed very happy. Since then, Delevingne has been partying with Amber Heard, cavorting with tigers and FaceTiming with Taylor Swift. As for Annie, well… Every time she’s appeared in the tabloids lately, it’s been with everybody’s favorite sourpuss, Kristen Stewart. 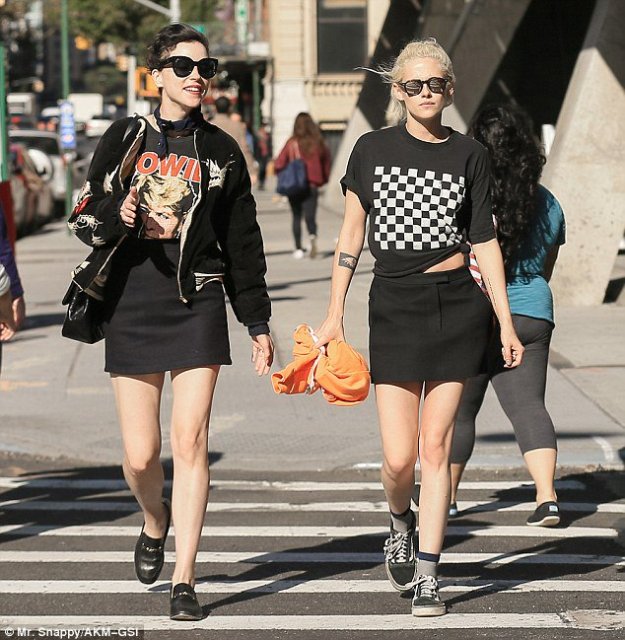 I don’t want this to be true, OK? I keep thinking about Alicia Cargile holding Kristen’s shoes on the Cannes red carpet, or the notoriously guarded Kristen gushing about Alicia to reporters for the very first time, or the serene pouts on both their faces when they march back to the car after getting lattes in Los Feliz. I think about Alicia’s sweet, despondent tweets during the couple’s separation earlier this year, and how genuinely content they’d seemed after their reconciliation. I don’t often get emotionally invested in the comings and goings of celebrity relationships, but I was really rooting for these two. As of this moment, it’s been weeks since Stewart and Cargile were photographed together at any of their predictable haunts. This doesn’t always mean anything, especially considering how notoriously private the pair are. Still.

I’ve denied whatever is going on here for as long as I possibly could. Guys, I think something is going on between Kristen and Annie. In early September, the pair were spotted eating a meal and attending an improv show together, which seemed innocent enough. Since then, as it’s become much more obvious that Cara and Annie’s relationship is over, Annie’s been seen with Stewart quite a bit more. Here they are strolling down St Marks Place in New York this past week, probably on their way to purchase a bong and some FroYo: 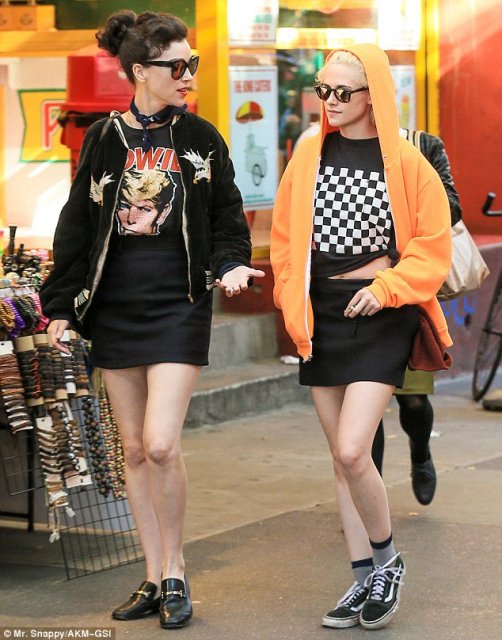 Tabloids were quick to point out the similar outfits Clark and Stewart are wearing, and if that’s an indicator of these two dating, my friends and I have a lot to answer for. However, tongues began to wag – are these guys together, or just suddenly really good friends? What happened to Cara and Alicia? Maybe Alicia and Kristen have an open thing? Maybe St. Vincent was always one of Kristen’s Five? Annie later appeared with Stewart at the premiere of her film Certain Women.

I didn’t want to believe it. I still don’t want to believe it. And yet, here we are. Sources on the ground in LA have been unable to present Vapid Fluff HQ with a definitive answer either way, but the mounting evidence is difficult to deny. Oh No They Didn’t has put together a comprehensive guide to Kristen’s [alleged] history of [allegedly] cheating on her previous partners. From here on out, all we can do is remain vigilant and wait for a sign from the heavens.