Despite the Obama administration’s general trend of ‘evolution’ on LGBT issues — the repeal of DOMA, Obama’s support of marriage equality, inclusivity for trans students under Title IX, Medicare’s coverage of gender confirmation surgery — there’s always been one issue they’ve refused to move on. For several years, there’s been pressure on the White House to sign an executive order for LGBT workplace protection, which would prohibit federal contractors from discriminating on the basis of sexual orientation and gender identity. Now, Buzzfeed reports that the White House will announce today that the executive order is finally coming; although the official announcement hasn’t been made, a White House official has spoken to members of the press. Obama has claimed in the past that the administration would prefer to accomplish workplace protections by passing ENDA than by signing an executive order, but it seems the fact that ENDA is likely to stall out again this year has forced the administration’s hand. 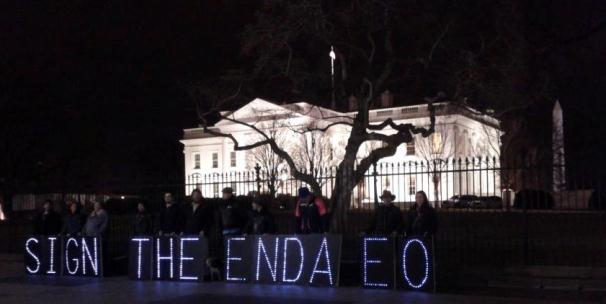 As a presidential candidate in 2008, Obama filled out a presidential candidate questionnaire in which he indicated that he would “support a nondiscrimination policy that includes sexual orientation and gender identity for federal contractors.” The administration has so far avoided using an executive order to make that ideal a reality, but perhaps in response to how stalwart the House of Representatives has remained as far as blocking Obama’s policy plans, he’s become more willing in recent months to use executive powers to effect change. An unnamed White House official speaking to Metro Weekly confirms that the LGBT nondiscrimination order is part of this new legislative approach.

“The President has declared 2014 a year of action – vowing to use the power of his pen and phone to take action on behalf of the American people to strengthen the economy and the middle class… His actions have been driven by the core American principle that if you work hard and play by the rules, you should have the opportunity to succeed, and that your ability to get ahead should be determined by your hard work, ambition, and goals – not by the circumstances of your birth, your sexual orientation or gender identity.”

Workplace protections are a crucial concern for many LGBT Americans, especially in the current economic climate. Workplace concerns are especially critical for LGBT workers of color, who face intense challenges when entering and then thriving in the workplace. This executive order won’t necessarily make a difference for the average LGBT employee; it only applies to federal contractors, and doesn’t change state legislation or affect private employers. It doesn’t change the fact that there are still states where it’s perfectly legal to fire or refuse to hire someone based on their LGBT identity. The hope is that, much like DOMA’s repeal providing a nudge to states where a repeal of a same-sex marriage ban was on the table, prioritizing LGBT workplace protection at the federal level will provide an example that might be imitated elsewhere in the legislature.

Obama is scheduled to attend the Democratic National Committee’s LGBT gala tomorrow, and the White House’s annual LGBT Pride Month reception at the end of June; although the official announcement still hasn’t been made, it seems likely that Obama will address the executive order publicly soon.