Despite the exhortations of an adorable family who loves Easter Eggs (not to mention the letter sent by 72 members of Congress), Obama has refused to sign an executive order that would protect LGBT employees from discrimination on the basis of sexual orientation by federal contractors. Instead, Obama’s administration says it’s looking to ENDA as the solution to problems faced by queer members of the workforce. And inclusive ENDA bill, you may recall, has been introduced countless times, with no real hope of ever being passed. Back in October, an organization formed to work for ENDA’s passage, but what progress has been made since then is unclear. In short, it would appear that Obama has decided not to sign this executive order because he’d rather put progress in the hands of a piece of legislation that’s failed consistently and which no one believes will succeed in the foreseeable future. 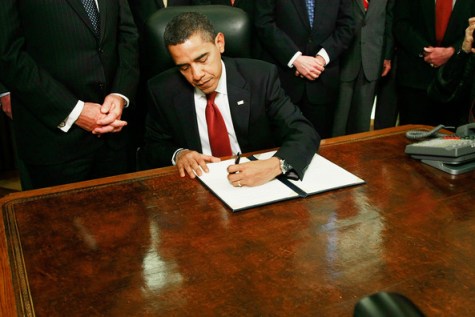 this is what obama won't be doing for LGBTs

What’s confusing is that to the outside observer, it doesn’t even seem necessary. Ostensibly, Obama is making this move because he doesn’t want to appear to be too gay-friendly in an election year. But Obama’s support of the gay community (and Planned Parenthood, while we’re on the subject) seems like it’s already more than enough to turn off anyone who’s basing their ability to vote on gay issues. Someone who will flat out refuse to support a President who allows gay and lesbian employees to be protected from discrimination seems like they probably already jumped that ship when Obama declared Section 3 of DOMA unconstitutional, or supported DADT’s repeal. Furthermore, the number of people (voters) who oppose this move seems to actually be pretty small — while large percentage of Americans still oppose marriage equality, a full 74% of Americans don’t believe that employers should be able to discriminate based on sexual orientation. So why is Obama so hesitant?

Political maneuvering meant to woo undecided voters in election years is common, and no one is surprised by it, even from Obama. And using the queer community as a way to distinguish yourself in one way or another isn’t new, either, and often takes the form of throwing us under the bus. But to refuse to extend basic protections to queer people when it’s within your power to do so, and to not even get a meaningful political payoff for it? That seems utterly indefensible. And even more indefensible, Jarrod Scarbrough and Les Sewell, the couple who attended the White House Easter Egg Roll to confront Obama about the executive order, are still left trying to explain to their eight-year-old daughter why their family still doesn’t have the rights and securities it deserves.