While homophobia and enforcing gender norms go without consequence much of the time, discriminating against your employees does occasionally turn out to be bad for business. Military contractor DynCorp International learned this the hard way after a suit against the company by harassed employee James Friso led to a petition with over 50,000 signatures urging DynCorp to change their policy and protect against sex and gender based discrimination. Oh, and also a $155,000 settlement for Friso. (Who isn’t actually gay, although his colleagues subjected him to anti-gay slurs and harassment.)

In a New York Times Op-Ed by M. V. Lee Badgett (who happens to be writing from Amherst, Mass – #1 city on our list of places you are likely to meet lesbians)  writes:

In the past, executive orders setting standards for contractors have not only put an American ideal of equal opportunity into practice; they have also helped show employers that ending discrimination is good for business. Employers who act out of bias waste valuable training and often pass over the best person for the job. In the case of gay and transgender workers, workplace discrimination comes with an added cost to employers, leading other lesbian, gay, bisexual and transgender workers to fear disclosure and contributing to stress, illness and lower productivity.

As a response to the suit, DynCorp has adopted a new LGBT inclusive non-discrimination policy. Both the New York Times Op-Ed and the Washington Post opinion piece seem united on the point that adopting non-discrimination policies is good for business, in addition to the whole “good for protecting human rights” thing. And both think it’s time for Obama to use his executive power to promote these policies with an executive order which doesn’t require congressional approval.

The situation for trans* employees is even worse; Mother Jones reported on the startling statistics revealed in a study by National Gay and Lesbian Task Force in February of 2011:

More than a quarter said they had been fired due to their gender identity.

Those who had lost their jobs were four times as likely to be homeless and 70 percent more likely to abuse drugs and alcohol.

41 percent of responders admitted to having attempted suicide.

Autostraddle’s Annika wrote about trans* workplace discrimination last year, reporting on a major court case involving Vandy Beth Glenn’s wrongful termination based on gender non-conformity. For many trans employees, the situation is dire; finding employment is difficult, and keeping it can be even harder. Employees are often pressured to essentially choose between a job and their true gender identity — Vandy Beth Glenn’s employer fired her when she began presenting as a woman, and she’s not alone. 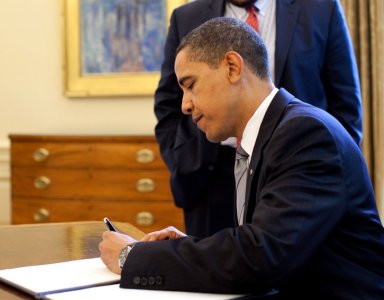 This is what an executive order would look like.

An executive order protecting against sexual orientation and gender-based discrimination, whether motivated by corporate ambition or primarily to protect human rights, meets the same end of securing much needed legislation. In 1941, Roosevelt issued an executive order outlawing employment discrimination based on “race, creed, color or national origin” for companies receiving government defense contracts or training programs, and Obama is capable of doing the same, even without Congress’s cooperation. The only thing holding him back are election fears — how much political currency he’s willing to risk for equal rights under his administration. As Badgett says, addressing sex and gender based harassment in the workplace is especially a matter of federal legislation when taxpayer dollars are at stake, as was the case with Dyncorp, a military contractor. Our nation has a long history of dealing with matters of workplace policy discrimination through executive orders, so Obama should take the opportunity to do the same with this matter while in office. Roosevelt’s executive order is remembered as the first effort against discrimination by the federal government, well before the Civil Rights Act of 1960 — what will Obama’s administration be remembered for?