In a dramatic move last week, Tesla Motors CEO Elon Musk announced that the electric car company is opening up its patents for use by other manufacturers. Breaking the news online in a blog post titled “All Our Patent Are Belong To You,” Musk wrote,

Tesla Motors was created to accelerate the advent of sustainable transport. If we clear a path to the creation of compelling electric vehicles, but then lay intellectual property landmines behind us to inhibit others, we are acting in a manner contrary to that goal. Tesla will not initiate patent lawsuits against anyone who, in good faith, wants to use our technology.

Characterizing patents as “a lottery ticket to a lawsuit” and noting the company’s surprise at how little interest the big car companies have shown thus far in electric car technology, Musk explained,

We believe that Tesla, other companies making electric cars, and the world would all benefit from a common, rapidly-evolving technology platform. Technology leadership is not defined by patents, which history has repeatedly shown to be small protection indeed against a determined competitor, but rather by the ability of a company to attract and motivate the world’s most talented engineers. We believe that applying the open source philosophy to our patents will strengthen rather than diminish Tesla’s position in this regard.

So far, reception to Musk’s announcement has been overwhelmingly positive — a mixture of fawning praise over the billionaire CEO as a real-life Tony Stark, nerdy glee over the “All Your Base” reference, general dislike of patent trolls and red tape, and enthusiasm for cool new technology. There’s a lot of chatter about Musk as an open source hero, but not, it seems, an awful lot of understanding about what actually happened. But this is an important topic because Tesla is the biggest US electric car manufacturer, and as of last year the entire electric car industry had a pitiful vehicle market share of <4%. That number needs to go way, way up in order to make a meaningful dent in global warming emissions, reduce use of fossil fuels, improve air quality, and generally, you know, save the world. (Or not! It’s up for debate — but either way, you should be informed.)

Really, though, my heart belongs with the nostalgic nerds on this one. The last time I heard a good  Zero Wing joke was like… over a decade ago. Image via Jalopnik.

To start, let’s talk about the information that Tesla is actually releasing. A quick search on the US patent office website reveals 169 patents under “Tesla Motors,” although other outlets are reporting the number as 200+ (possibly filed internationally or under different author names). Inventions include “Dynamic antiwhiplash apparatus and method,” “Charge rate modulation of metal-air cells as a function of ambient oxygen concentration,” and “Triple layer winding pattern and methods of manufacturing same,” among many other obliquely and/or intimidatingly titled documents. Basically, though, they’ve taken out a lot of patents related to charging batteries and a variety of things relating to motors.

Tesla’s patents, like all patents, exist to protect inventions which are useful (have utility), novel (don’t already exist), and non-obvious (meaning that a person with ordinary skill in the field of the invention would not reasonably be expected to assemble or anticipate the invention). Patents come in three flavors: 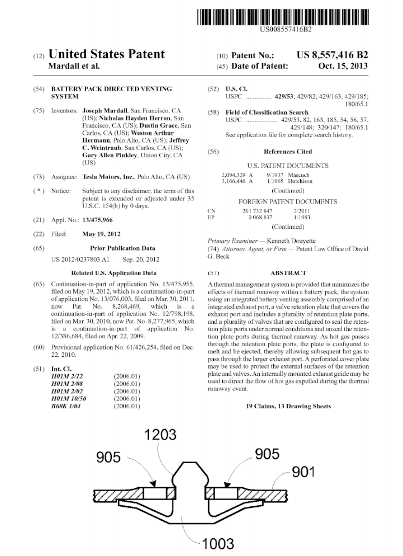 One of Tesla’s patents.

Although you wouldn’t know it from the media coverage, the information contained within the patents is a far cry from source code (or a recipe book, or blueprints). Because patents are publicly published upon issuance, extraneous details are rarely included where they do not directly relate to the unique features of the invention. Additionally, patent filings are intentionally written very broadly so as to provide the patent holder with as much legal protection for their design as possible. Without CAD files, schematics, a bill of materials, and other crucial engineering documents, patents are not enough to implement designs.

So while Tesla may no longer be filing aggressive lawsuits for patent infringement, “open source” isn’t the greatest analogy because a) the inventions were already public, and b) the write-ups do not contain the necessary information to replicate the design. This doesn’t mean that Tesla is a bad company; more likely, it just means that Musk has a good understanding of what will generate buzz in the media. “Copyleft,” a more accurate term, just doesn’t have the same ring. 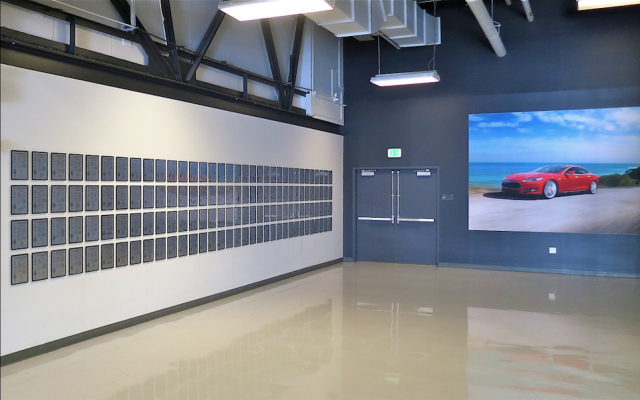 The Tesla patent wall. As of June 12 the plaques have been removed from display in a symbolic gesture of solidarity with the open source movement. Photo via Steve Jervetson, Flickr.

While many are calling Musk’s move unprecedented, the auto industry does in fact have fairly recent experience with patents being opened up for industry-wide use. In the 1960s, Volvo shared the patent for the three-point safety belt, a move which is estimated to have saved over a million lives since then. And in the 1970s, General Motors shared its invention of the catalytic convertor, which scrubs smog-forming pollutants out of exhaust. Auto companies also work cooperatively all the time, making business deals to license patents and work on individual shared projects together. But rarely (never?) do companies issue the wide open invitations of the sort that Tesla just did. I’m rarely (never?) interested in cars, but Tesla’s announcement just made the field a lot more interesting. So that’s something.

Tesla’s lithium-ion battery pack technology is years ahead of competitors, and the company estimates that their packs — the most expensive part on any electric car — cost about half as much as their rivals. With Tesla gearing up to build its first battery producing gigafactory, Musk’s announcement couldn’t have come at a better time. Much of the company’s long term success in creating awesome, affordable electric cars is now tied to getting more of their batteries out on the market; the more orders the gigafactory is able to fulfill, the better the economies of scale will be, allowing Tesla to lower the cost for consumers.

Whether the big car companies will take the bait remains to be seen.