“Seriously, stop pulling away!” At 3:30 PM on Halloween, I’m losing my patience with this boi, my life-partner-in-crime-spousal-unit-person, on whom I’m trying to apply smudgy black eyeliner.

“I’m sorry. I can’t help it!” he says, trying his damndest to keep his head still and his eyes open. It is an exercise in futility. We assume a weird position where I stand over him while he hugs my legs and I tip his head back with one hand while applying the eye makeup with the other. It sounds like a Kama Sutra position but it is actually just really uncomfortable. We are both giggling now.

A full hour later, his face is done and I’m pretty pleased with my work. I’m not going to quit my day job to go on Face Off or anything, but I did a fairly good job following KlairedelysArt’s Youtube makeup tutorial. 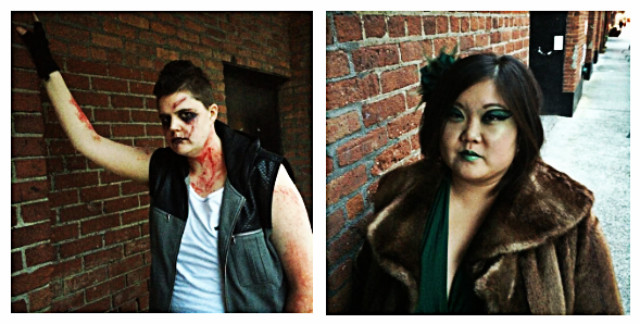 The final looks. How’d I do?

We both finish getting fixed up and head over to the McKittrick Hotel, where we have tickets for the Last Supper/Sleep No More/Inferno combo. This is not our first time to Sleep No More, a site-specific immersive theatre production based on Macbeth and Hitchcock and set in a 1930’s dreamscape. The promenade performance lasts for three hours, during which audience members, wearing ghostly white masks and having pledged to be completely silent, interact with the space and performers as they wish. It is a choose-your-own adventure for adults, with almost 100 lavishly dressed rooms to explore and 19 actors/dancers performing simultaneously throughout the multi-story, 100,000 square foot space. 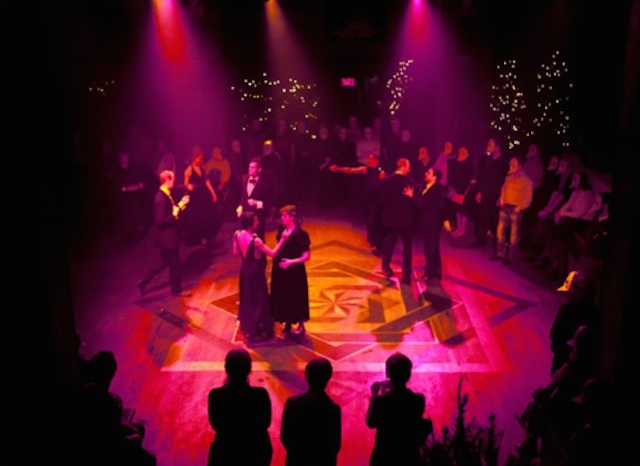 Within the space there is a sanitarium, a forest labyrinth, a street with shops and offices, a speakeasy, a hotel lobby, and some rooms that only open for a few minutes at a time, that only a select few get to see. The McKittrick Hotel is not really a hotel, of course, but you do feel like you are checking in or, rather, checking out of reality. Sleep No More is a Lynchian lost world, a timewarp, and walking out of it, you feel like you might have just emerged from a fugue state. 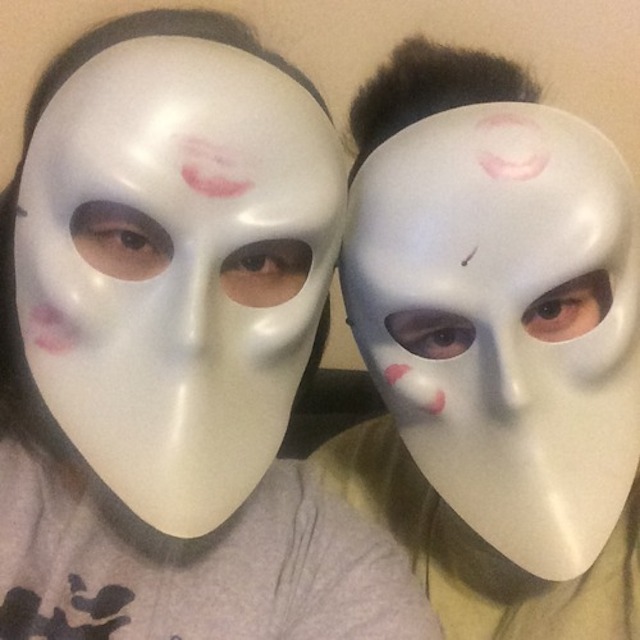 Us in our masks…at home…because that is a normal thing to do, right? Reassure me…

The show is not explicitly queer, but it seems to have a lot of fans who are, including us. There is a lot of girl-on-girl and boy-on-boy action to be found if you know where to look. You don’t really have to look that hard. Follow any woman in the show and she’ll eventually be making out with another woman, or more. 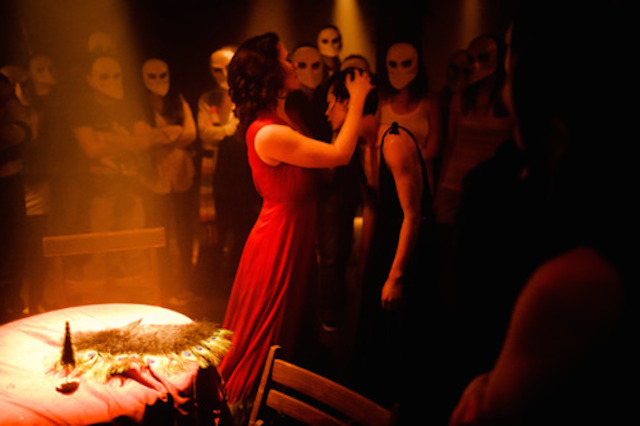 Tonight is the infamous McKittrick Halloween party, one of the most talked about events of the year. It is our first McKittrick party and we are buzzing with excitement. It starts off with the Last Supper, for which we are seated at long tables in their on-site restaurant, the Heath. The theme of the evening is Inferno, the Seven Deadly Sins. We are dressed as “wrath” and “envy,” respectively. As we walk in, we pass be a strange sight of women in white dresses and red blindfolds, frozen in doll-like poses inside the windows of an old train car. At first, it seems they might be mannequins, but then I see the lip of one woman quiver, just slightly. During the meal, the guests of the head table, where a dark-haired woman seemed to be hosting, start bringing in the women in white one by one. The womens’ feet are bathed and they are seated at the table, still blind folded, to be fed slowly by the other guests, whose faces are covered in metallic gold. It seems these are the virgin sacrifices, the lambs for the slaughter. 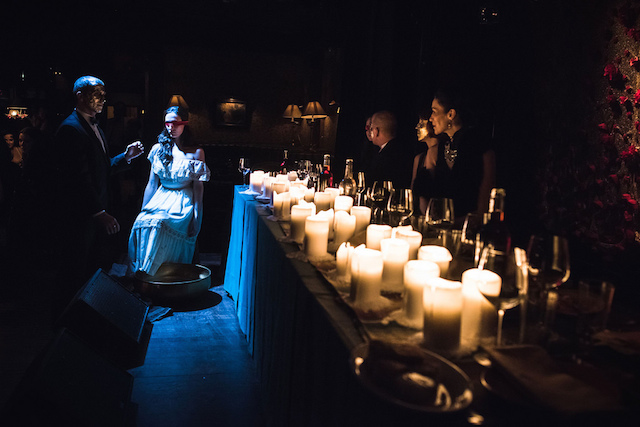 via The McKittrick Hotel

The feminist side of my brain is reeling a bit at this whole virgin/whore/sacrifice thing. I mean, couldn’t at least one of the virgins be a dude? Isn’t this a tired trope? But the queer side of my brain is completely immersed in watching one woman slowly feed a blind-folded woman a bite of lamb. I’m sorry? What were you thinking feminist brain? Where you having thoughts? Have you seen what’s going on over here at this table, though?

After the dinner, a curtain is drawn around the head table and the Heath’s host sings us a song before sending us off to the Sleep No More show. We are given instructions and masks and descend into the McKittrick Hotel (remember, not actually a hotel). The show is fantastic in every definition of that word, as per usual. I won’t give away too many secrets and spoilers, but I highly suggest you go to this show if you are ever in NYC and can scrape together the pennies. Tickets are in the range of $80-$120. It is worth every dollar. Tourists, especially, I really must insist you see this off-off-broadway immersive performance instead of whatever broadway show you were going to get tickets to. I promise I wouldn’t lie to you. This night is my 14th show and I still have not seen it all. It is almost impossible to ever see it all, between the 19 different storylines happening simultaneously and the rotating cast of actors.

At the end of the show, we are herded onto the 2nd floor lobby, which has been redecorated to look like that gay dive bar you went to in college, complete with tacky Chinese lanterns and glittery curtains. There is even a sad hetero corner that no one wants to stand in. 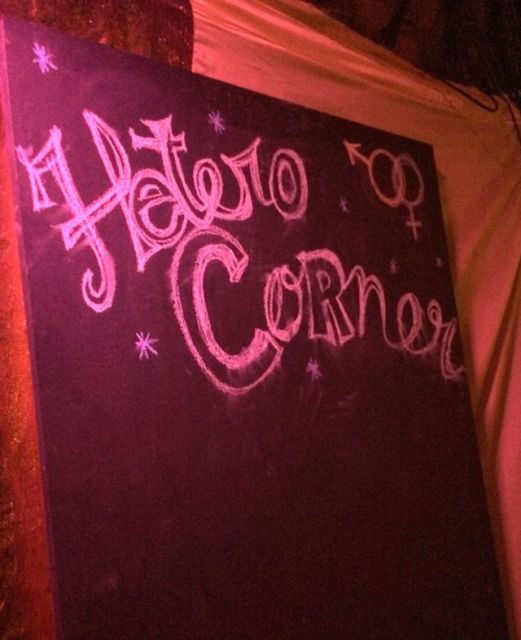 Nobody puts Baby in the Hetero Corner.

Shortly after, other floors for the party are opened, including the huge ballroom, the 3rd floor Macbeth suite, and the 4th floor bar or, as we decided it was, the unofficial lez floor. Throughout the space, there are huge glass boxes set up in which the actors and dancers perform. Some are used like go-go stages. Others house performances (and slaughters). The entire scene is very Party Monster era club feel. In the main bar on the 2nd floor, dubbed Club Limbo, the Heathens play and cotton-candy-cloud lanterns dangle as though they are floating away from the low ceilings.

via The McKittrick Hotel

After watching some performances and doing some boogying in the huge ballroom area, we end up spending considerable time on the 4th floor, which you can only get to by elevator. Why, you ask? Well, specifically because of two actors, Leslie Kraus and Virginia Logan, who are steaming it up in their glowing triangular glass box (no pun intended). I mean, a cute woman in a tuxedo shirt and vest hitting hard is going to get me every time. The two actors playfully pass glow stick necklaces out to the crowd through tiny holes cut in the glass and pour blended drinks to the outside guests through a funnel system. They also scrawl things (backwards from the inside, very impressive) in chalk on the walls like, “I want to eat you,” and “What will you do for it?” There’s lots of people kissing Virginia through the dirty glass (eww, but also, hot). There are also absinthe shots on the side bar with two very adorable women pouring. We decide this is the queerest floor for the ladies (even though there is a wicked drag performance going on in the gay dive bar space on the 2nd floor that includes a striptease version of Let It Go). I mean, two women dancing in a triangular box and licking all the glow sticks and wanting to eat everyone. I’m into it. 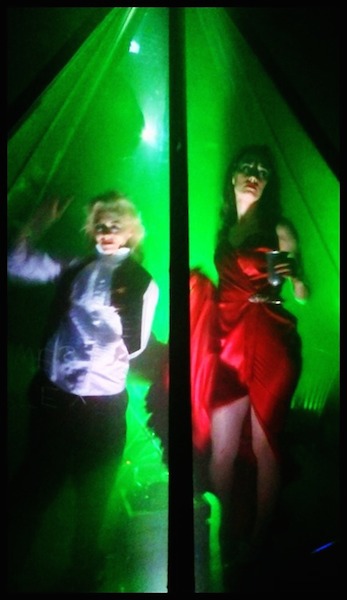 My fuzzy picture of my fuzzy feelings for these two residents of the 4th floor triangle box.

Around 2:30am, we head back to our hotel, exhausted and thrilled. At the McKittrick, the debauchery rages on into the wee hours.

The Halloween party is over, but you can still have your own creepy adventure at Sleep No More any day of the week. Sleep No More is the work of Punchdrunk, a UK-based immersive theatre company, produced by Emursive in NYC. Performances happen every night, with two shows on Fridays and Saturdays. Tickets are between $80 and $120. Currently booking through February 2, 2015 (and likely to be extended after that).