When I woke up this morning, our Managing Editor Kayla Kumari wished us all a “Happy Hocus Pocus 2 Day!” in the Autostraddle slack. That was pretty immediately followed by our A+ & Fundraising Director Nico reminding us that Bette Midler has been parroting some anti-trans talking points recently, which she never apologized for. I bring that up because if we’re going to talk Hocus Pocus 2 and queer Millennial nostalgia, it’s important to get that out right at the front (Bette, I know you can do better than this).

It’s also tied to something I thought a lot about today — as I played a 90s pop hits playlist on Spotify, as I made chocolate chip pancakes with maple syrup infused whipped cream (a sugar high fitting any seven-year-old, the age I was when the first Hocus Pocus premiered), as I settled into Disney+ to press play — you really can’t go home again. Even if Hollywood has spent untold hundreds of millions of dollars in reboots and sequels to trick Millennials specifically into trying.

I know there is nothing more boring than a Millennial talking about 90s nostalgia! Waxing on about AOL dial-up is our “I walked 10 miles in the snow uphill.” And even now, everyone just rolled their eyes. But it’s pretty clear early on, despite being an overall solid family film, that the new Hocus Pocus is written with the adults who grew up watching it on cable in mind, and not the kids who will discover it on streaming. At one point Becca (Whitney Peak), the new virgin in charge, is told that legend has it that a witch comes into her power on her 16th birthday. She scoffs “and like most legends, I’m assuming that’s based in some sort of patriarchal fear of female aging.”

Ah yes, that’s exactly what I was thinking about at seven years old while I searched for the last mini reese’s cup! The Patriarchal! Fear! Of! Aging! That line is written for someone who knows what it sounds like for their knees to creak, who has pondered the liquid gold that is Vitamin C serums (coincidentally, another gag in the film). There is, quite simply, no other way. 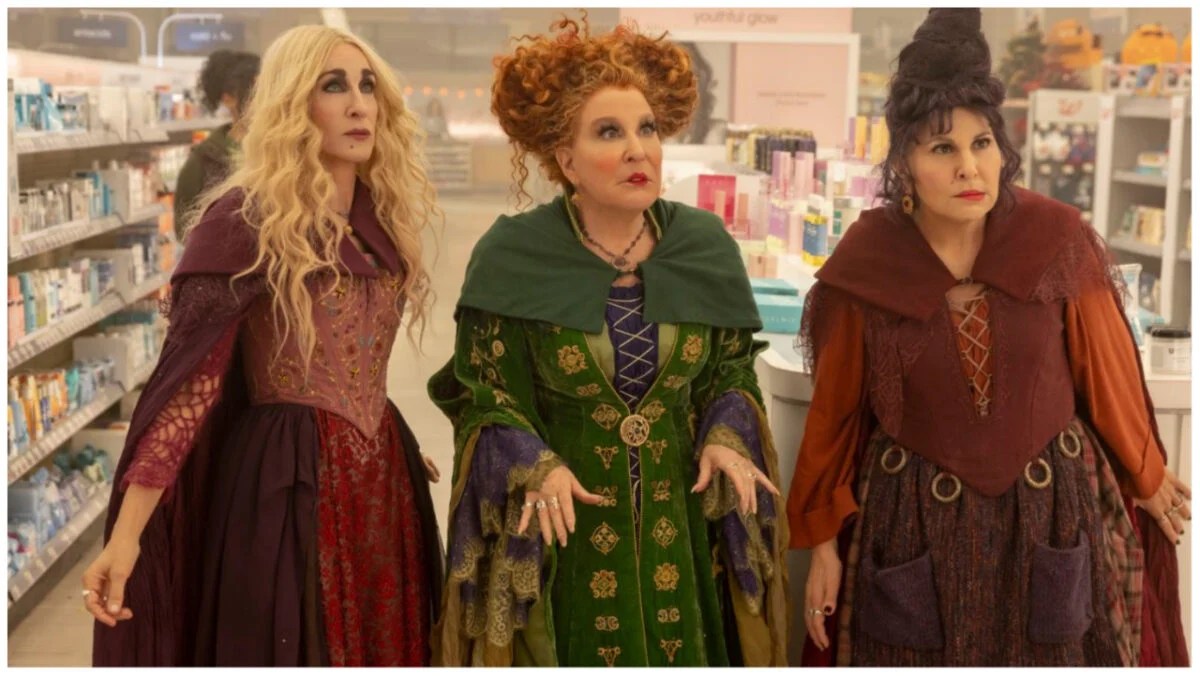 I’m pointing out the obvious because Hocus Pocus 2 really is cute (enough). If you’re in the right mood, it’s maybe even good. I don’t think anyone who loves the original — I love it so much, I once wrote an entire article dedicated to creating a themed movie night around it — will watch Hocus Pocus 2 and feel like they wasted their time. But it is hard to write about Hocus Pocus 2 seriously on adult terms, and it’s not taking children seriously enough to write about it on their own terms. Where does that leave us? I don’t know. But it’s not holding a black flame candle to the original.

I originally volunteered to write about the new Hocus Pocus because I had hoped, much like the 2018 sequel book, that it would be gay. Because all witches are gay. Sadly, that’s gonna be a huge “Nope!”

In the book, Allison and Max (the reigning virgins from the original film) are married and still living in Salem. They have a daughter named Poppy who does not believe in witches, but very much believes in her crush on Isabella, the most popular girl in school, who absolutely does. Black candles get lit, witches come back to town, and Halloween night hijinks ensue. In the movie Hocus Pocus 2, none of that happens. Allison and Max are nowhere to be found, and they don’t have a daughter named Poppy. Like Isabella, Becca is Black, and like Isabella, Becca has a serious thing for witches. Once again, candles do get lit and witches do come back to life. That’s about where the comparisons end.

Instead of being gay in a literal sense, Hocus Pocus 2 focuses on the strength and power of girls’ relationships to each other, friendship, and sisterhood (we shall call this gay, in the Baby-sitter’s Club sense). Becca has two best friends, Izzy (a Latina nerd with all the best one-liners) and Casey, who doesn’t have much personality on her own and fell out of touch with Becca and Izzy after getting a boyfriend. Halloween doubles as Becca’s 16th birthday and at the friends’ annual honorary séance things don’t go as planned, bringing Winnifred (Midler), Mary (Kathy Najimy), and Sarah (Sarah Jessica Parker) back from the dead.

Meanwhile, Winnifred has plans of her own. Instead of eating children à la ’93, she wants to gain ultimate power to control her own fate, which was denied to her as a girl growing up during the Salem Witch Trials — there’s a flashback that brings in a very hot Hannah Waddingham (sorry, I’m gay). Instead of the 90s witch hunt, this time both trios of women, well a trio of teen girls and a trio of women, learn more about each other as All Hallows Eve drags on. This is where the movie gets a little thin; one of the things that works so well in 1993 is that in between the jokes, if you step away for even a second, the Sandersons were a terrifying threat to a child. The sequel seems nervous to cast them as villains, I assume because in the 30 years since they’ve become beloved Disney properties with their own sing-a-long spectacular at Mouse parks.

A different writer would try to make broader pulls about witches as codes for empowered women defeated at the hands of angry men, about women learning from each other, and recasting witches as cultural icons. Certainly the movie thinks it’s clever in those comparisons. But I can’t bring myself to do it. Hocus Pocus 2 is mindless, and I feel just great about that. The Sandersons sing Blondie and Elton John, one slightly less cringe than the other, and neither performance approaching the stratospheric “I Put a Spell on You.” Kathy Najimy flies on two roombas instead of a vacuum cleaner for… some reason? SJP steals nearly every scene running amuck (Sarah Sanderson voice: amuck amuck amuck). Bette Midler gets a surprisingly moving monologue at the end there. I had a great sugar crash from my pancakes. No one got hurt.