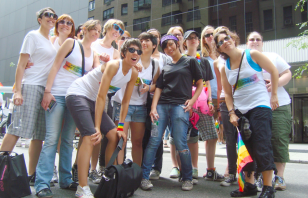 This is a big Pride Weekend, I hope you are REALLY PROUD OF YOURSELF FOR BEING GAY THIS WEEKEND, you ravaging lesbian beasts.

This is where we are right now – NEW YORK FUCKING CITY — so when you’re out there having fun for Pride, maybe you’ll notice a bunch of Autostraddlers trying to flirt you into attending Rodeo Disco 2: Back in the Straddle.

You should check out all the editor’s picks over at GO! Magazine for the best in New York City nightlife because basically everything you need to know is at GO! For reals.

OurSceneTV has a kickoff video for Pride and a pride guide, featuring a lot of famous people who may or may not be involved in NYC Pride whatever it’s a hawt video:

LoverGirlNYC hosts Fierece at the Chelsea Brewing Company (Pier 59, West Side Highway @18th street) for $20 advanced with am meber card, or $25 at the door. Celebrity host Hot Wings from VH1’s ‘A Real Chance of Love 2″ with 1500+ women.

The Dyke March steps off at 5pm from Bryant Park.

Harlem Pride’s first ever celebration starts at noon and goes ’til 6pm, on West 119th street between Fifth and Malcom X Blvd!

Los Angeles’ Legendary Truck Stop party is hitting New York City at Touch Nightclub on 240 Qest 52nd street, ($20 before 11pm, $25 after).  DJ Brynn Taylor and the legendary Truck Stop Dancers, as seen on the hit reality TV show Gimme Sugar. Email info@fuse-events.com to get tickets/info before it sells out!

The Big Pride Parade kicks of at noon with Grand Marshals Dan Choi, Constance McMillen and Judy Shepard.  We may or may not be marching standby for more info.

Sunday, between the parade and our party, you can spend your afternoon at Cirque Du Stiletto at the Maritime Hotel Cabanas on 88 9th Avenue (at 17th Street). ($15 before 6pm, $20 after).

Bitches, buy your tickets now. Sunday night Rodeo Disco 2 is shapin’ up to be quite a little something. Basically everyone thinks you should go to our party! OurScene TV thinks so, Time Out NY thinks so (print issue! we’re a recommended pick!), Go Magazine thinks so. Even if you are also going to Snapshot, you can totes still come to Rodeo Disco TOO.

Guess who’s going to be hosting the Girl Blast party at Chicago Pride this Sunday… Autostraddle’s own Nat Garcia and Dani Campbell! So if you’re not able to make it out to Mason Dixon for Rodeo Disco 2 (for which tickets are still available!), you should definitely make your way over to Chicago for some Nat-Garcia-Dani-Campbell-realness. Nat promises an “Autotastic party” and you know she’s too lovely to tell a lie.

San Francisco is being super special this year because EDEN is hosting the first all-lesbian pride weekend June 25-28th in addition to the typical festivities. ‘Cause there are a lot of lesbians in San Francisco btw. Like, a lot.

And the best part is that tonight THIS VERY NIGHT, June 25th, you can catch our very own Julie Goldman along with Dana Goldberg, Sandra Valls and Gina Yashere at Eden’s Comedy Night at Parc55 (55 Cyril Magnin Street) at 7 PM.

After you change the pants you peed in during Julie Goldman’s show, also check out the UNITY party with entertainment from San Francisco’s Hottest DJs. It goes from 9pm -2am. $30 with 5% proceeds San Francisco Pride at the 111 Minna Street: www.111minnagallery.com, www.in2uevents.com

The San Francisco Dyke Planet / Green Planet Dyke March kicks off with a 3pm rally and a 7pm march at Dolores Park on Dolores & 17th street. Over 50,000+ people will be presenting “our diverse dyke culture with a radical political edge” and marching through the Mission and Castro.

You can check out the official schedule of SF Pride events at the San Francisco Pride website, where I hear that you lucky bitches will get to be proud along with the Backstreet Boys, super-hawt Hunter Valentine, Cleve Jones, Christine and most importantly the Bay Area American Indian Two-Spirits.