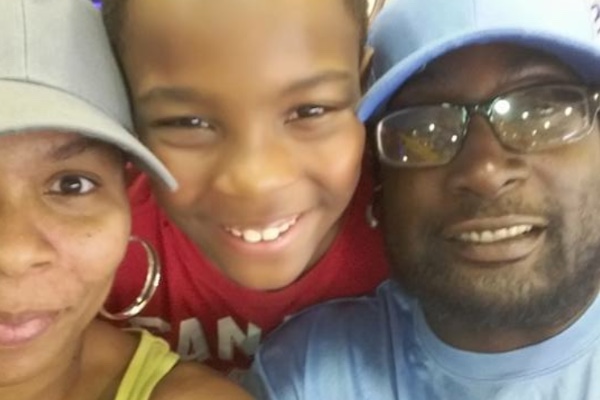 Keith Lamont Scott with his wife, Rakeyia Scott, and son.

+ NBC News obtained exclusive video of the moments leading up to the fatal police shooting of Keith Lamont Scott in Charlotte, North Carolina. The footage was taken by Rakeyia Scott, Keith’s wife, and does not show the exact moment he was shot by police. Rakeyia can be heard saying “don’t shoot him, don’t shoot him” and “he doesn’t have a gun” as police appear on the scene and head toward a white pick-up truck. She urges her husband to come out of the truck but moments after you can hear gunshots heard and Rakeyia shouting “He better not be fucking dead, he better not be fucking dead.” Scott’s fatal shooting sparked protests in Charlotte with demands for bodycam and dashcam footage to be released. Charlotte’s police chief says the footage contains “the version of the truth” but will not release it to the public because it’s still under investigation. 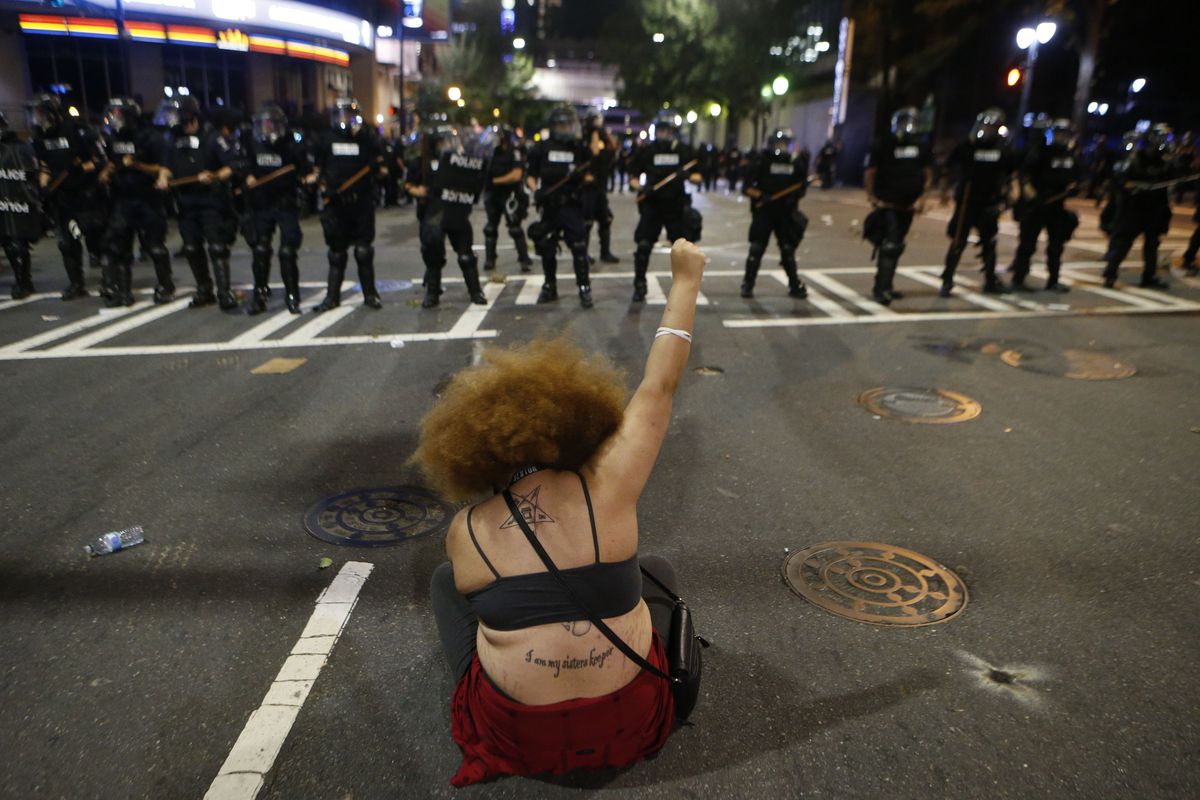 For three nights, several hundred protestors in Charlotte took to the street to protest Scott’s death who witnesses say had a book, not a gun, and was shot by a Black, plainsclothes officer identified as Brentley Vinson. The city imposed a midnight to 6 a.m. curfew but when peaceful protestors were out past midnight the police didn’t enforce the curfew. On Wednesday, 26-year-old protestor Justin Carr was fatally shot during a “chaotic demonstration.” Police say he was shot by a civilian and not an officer but protestors who were there contest it. Today police arrested Rayquan Borum in connection with the protestor shooting.

You can support Charlotte Uprising, a coalition of Charlotte and North Carolina based organizers, by signing their petition with a list of their demands.

+ Not technically news, but here’s your complete guide to early and absentee voting. Vote! Vote now, if you can!

+ It’s no use anymore saying that anything Trump says or does is shocking or even shockingly bad, because it’s all so bad that those words are bordering on meaningless. That said, his proposal to institute stop-and-frisk policies (at first it seemed this might be a national plan, then he later qualified he meant just in Chicago) is an outrageously terrible — and racist — idea.

There’s a lot to pick apart here, but let’s start with the basic fact that Trump is wrong about stop-and-frisk policies’ working in New York. It’s pretty well documented at this point that stop-and-frisk policies didn’t really do anything to lower violent crime in New York. The practice has been scaled back dramatically in New York over the past five years, with no attendant spike in crime rates.
As the Brennan Center for Justice has pointed out, when the number of police stops in New York plunged after the 2011 peak of 685,000, the overall crime rate remained steady, and the murder rate declined sharply at the same time as the number of police stops was trailing off. After a judge ruled that New York’s stop-and-frisk procedures violated the rights of members of minority groups who were disproportionately targeted, the city implemented new guidelines to bring the practice within constitutional constraints.

+ Trump’s Ohio campaign chair, Kathy Miller, has resigned after saying some extremely racist and incorrect things, like that racism hasn’t existed for 50 years but also that racism didn’t exist before Obama. Now if Trump were also held accountable for his racist ideology, that would really be something!

+ It’s the year of Silicon Valley billionaires openly taking parts of the course of our society in their hands! Peter Thiel shuttered Gawker, and now it’s come out that Palmer Luckey, founder of Oculus, has been funding “a pro-Trump political organization called Nimble America.” What does this actually mean? It means he’s put an undisclosed amount of money towards anti-Hillary memes and shitposting.

Nimble America says it’s dedicated to proving that “shitposting is powerful and meme magic is real,” according to the company’s introductory statement, and has taken credit for a billboard its founders say was posted outside of Pittsburgh with a cartoonishly large image of Clinton’s face alongside the words “Too Big to Jail.”
“We conquered Reddit and drive narrative on social media, conquered the [mainstream media], now it’s time to get our most delicious memes in front of Americans whether they like it or not,” a representative for the group wrote in an introductory post on Reddit.

+ In the latest combination of words you could not have predicted you’d read in the press five years ago, Joss Whedon has launched a super PAC against Donald Trump.

+ In a sad victory for racist hiring practices, the 11th US Circuit Court of Appeals has ruled it’s legal to refuse to hire people based on dreadlocks. The suit was originally filed by the EEOC on behalf of Chastity Jones, who had a job offer that was rescinded when a human resource employee saw she had dreadlocks. The court’s reasoning was apparently that hairstyle isn’t an “immutable characteristic” and can be changed, so making decisions upon it doesn’t constitute racial discrimination, ignoring the cultural and social association between dreadlocks and Black Americans.

+ There have been several stories recently about how forensic evidence approaches that have long been considered airtight by many — including hair comparison, blood spatter and bite mark analysis — aren’t actually very reliable, and a new report from the President’s scientific advisors confirms it. But it seems many prosecutors don’t want to stop using these forms of evidence even if they know they’re not accurate; Attorney General Loretta Lynch has “declined to accept the report’s recommendations on the admissibility of evidence.”

“Prosecutors should not be concerned principally with convictions; they should be concerned with justice,” said Daniel S. Medwed, author of “Prosecution Complex: America’s Race to Convict and Its Impact on the Innocent” and a professor at Northern University School of Law, told Salon. “Using dodgy science to obtain convictions does not advance justice.”

+ California Governor Jerry Brown signed a bill last week that hopes to protect janitors from sexual abuse while working night shifts. The bill AB1978 requires janitors and their supervisors to complete sexual harassment training every two years starting in 2019. According to the AP, “A list of those that follow the law will be published online. Unregistered businesses could be fined up to $10,000 and anyone who contracts with them could be fined up to $25,000.” The bill is a response to a PBS documentary that premiered last year showing how pervasive sexual assault is in the janitorial industry, many who are immigrant women who fear deportation if they speak up about the assault.

+ An Arizona state judge, Karen Mullins, rejected two calligraphers’ claims that serving same-sex couples would be a violation of their freedom of speech and religion. Joanna Duka and Breanna Koski, co-owners of the Brush & Nib calligraphy studio, filed a lawsuit in May challenging Phoenix’s non-discrimination ordinance. “The printing of names does not hinder in any way Plaintiffs independent exercise of its religious belief by attending the church of their choice, engaging in religious activities or functions, and expressing their beliefs on their business website and literature or in their personal lives,” Mullins wrote.

+ Body cam footage from police in Hagerstown, MD shows them pepper spraying and handcuffing a 15-year-old girl whose bike had collided with a car and who had hit her head.

[Robin Ficker of College Park, Md., an attorney reportedly representing the girl and her family] said that as the girl tried to ride away on her bike, police reportedly pulled her off the bike, put her hands above her head and slammed her into a wall. Ficker posted a photo of the girl and video of the incident on his Facebook page, noting that the alleged victim is only 5 feet tall and weighs 105 pounds.

She has been charged with “disorderly conduct, two counts of second-degree assault, possession of marijuana and failure to obey a traffic device.”

+ Tulsa police officer Betty Shelby, who killed unarmed Terence Crutcher as he was standing by his stalled car, was charged with manslaughter and then released on a $50,000 bond “shortly afterward.”

+ Chelsea Manning had her hearing regarding whether her suicide attempt qualifies as “misconduct,” and has been sentenced to 14 to days in solitary confinement.

+ On the trauma and PTSD of black pain gone viral.

Escaping the imagery can be nearly impossible, especially as online users post commentary and news updates. For some, it can merely be a nuisance. But research suggests that for people of color, frequent exposure to the shootings of black people can have long-term mental health effects. According to Monnica Williams, clinical psychologist and director of the Center for Mental Health Disparities at the University of Louisville, graphic videos (which she calls vicarious trauma) combined with lived experiences of racism, can create severe psychological problems reminiscent of post-traumatic stress syndrome.

+ We Won’t Wait 2016, a coalition of groups focused on mobilizing low-income women and women of color to vote, launched their campaign to make sure their voices are heard during this election. They’re focused on “kitchen table” discussions regarding more than just reproductive rights and equal pay but also paid sick leave, immigration reform, criminal justice reform, gun violence and access to health care.

+ The Obama administration has announced that it will “fully resume” deportation of Haitian migrants, to the dismay of migrant advocates.

+ A lesbian at LA’s Staples Center says she was mistaken for a man in a restroom and questioned by staff; just more evidence that bathroom policing hurts all women, although of course it is targeted at and primarily affects trans women.