NEW JERSEY: The New Jersey Senate Judiciary Committee voted yesterday to bring a same-sex marriage bill to the floor of the Senate on Thursday for a vote. Check out our liveblog of the hearing for more info on the debate, which reminded us of a multi-act play or perhaps a variety show but about very, very, very important things. We would like to call it “The Neverending Story Debate.” Props to Riese for blogging that sucker for 9 hours straight. WITH PICTURES. The bill still has a long long way to go, and many equality advocates are wondering if this time’ll be the charm we need. 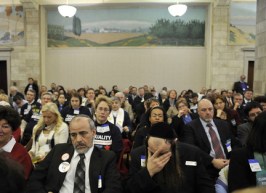 Same-sex marriage bill advances in New Jersey: Corzine says, “This is an action that is long overdue. For far too long, a large segment of our population has been denied the fundamental rights and protections of a civil liberty that is granted to all Americans.” (@cnn)

A breakdown of the vote which won; with 7 for and 6 against. (@pams)

When do you become a New Jerseyan? “I want to start expending as much attention on the NJ same-sex-marriage debate and vote — especially since I know that these are politicians who actually might care what I think about it, and I have friends and neighbors right here in Essex County for whom this really matters.” (@nytimes)

Why Not Trust the People? (um, b/c the majority should not determine the rights of a minority?!!) “So, try as they might, all of those people in T-shirts can’t get around the essential nature of what they are trying to do: Rush a bill through lame-duck in defiance of the voters.” (@nj.com)

The study showing the economic benefits of same-sex marriage, which was presented yesterday to the legislature. (@Williams Institute) 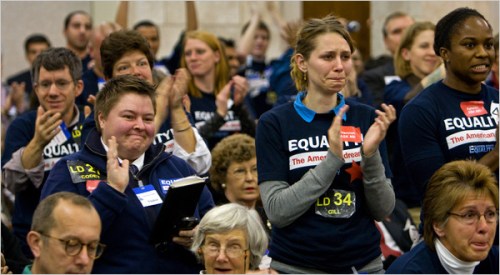 WE KNOW WHERE YOU LIVE: Where are the gays? They are here: 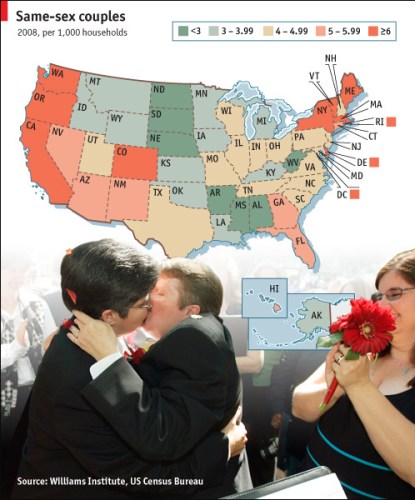 GAY BISHOP: We told you Sunday about the possibility that Mary Glasspool would be elected an assistant bishop of the Episcopalian church in Los Angeles. She indeed won that election over the weekend, but now a bunch of other Episcopalians/Anglicans have their panties in a twist.

Bishop Robinson’s election raised tensions between the U.S. church and its counterparts around the world, especially in Africa and South America, where church leaders expressed concern that the Americans were pursuing a liberal social agenda in defiance of traditional Christian teachings on homosexuality. (@wsj)

This is more evidence of the vast even-more-conservative religious contingent outside the US. And we thought we had it bad here. 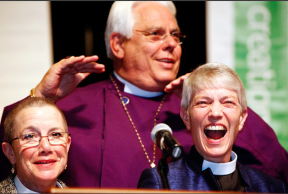 Slightly related note: The Wall Street Journal uses this photo to illustrate the story, and I am VERY confused about it. He looks like he is playing basketball with their heads.

NEW HAMPSHIRE: As the historic day (January 1, 2010) approaches when New Hampshire’s same-sex couples will be able to marry, Gay & Lesbian Advocates & Defenders (GLAD) has published “How to Get Married in New Hampshire.”

UGANDA: US News & World Report wonders if US religious leaders should oppose the Ugandan anti-gay bill? Um, yes. Yes, they should. Is this really the time for a question headline?

Today, the progressive faith-based political group Faith in Public Life issued its own denouncement, signed by dozens of American Christian leaders, mostly political liberals. And the conservative group Exodus International already has denounced it, to their credit, though the group was at the conference that prompted the bill in the first place. (@USN&WR)