Most of my earliest memories of video games don’t actually involve me playing them. I have two older brothers and Nintendo only had two controllers, so you can probably guess how that worked out for me. I didn’t really mind, though; I was happy to watch them play for hours, and eventually, I got to play, too. Over the years, I made my way through loads of games on NES, Sega (even Sega CD, that elusive minx), and N64, but I stopped playing right around the time Halo and Call of Duty became popular. I’m not sure if it was because I heard an overload of “girls can’t be good at video games” bullshit or the fact that I am actually awful at first-person shooters. Either way, I lost interest.

Fast forward: I am thirty years old and I am not a Gamer. Gamer feels like a title you need to earn, and I, like many other women, have an annoyingly persistent case of imposter syndrome. Plus, the world of gaming is an intimidating scene to break into. Luckily for me, I have all sorts of gamer friends who are not assholes, and they’ve encouraged me to get back into it.

As I’ve tentatively dipped my toes back in that water (I’ve been using Steam to play on my computer, and I’m thinking about getting a PS4), story-driven games have been exactly what I need to gain confidence and get excited about gaming again. They are super engaging, obviously, because they’re all about the story and the characters. And, even better, they’re pretty much impossible to lose (in the traditional sense)! 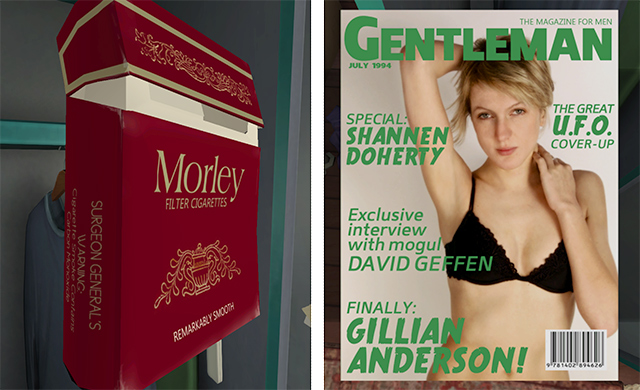 Nostalgia Exhibits A & B

This is an absolutely perfect starter game: the controls are simple, and it only takes a couple of hours to play through. You can read a much longer (and spoiler-ier) review here, but the basic plot of Gone Home is that you’re 21-year-old Kaitlin Greenbriar and, after a year of gallivanting around Europe, you’ve returned to your family’s recently inherited, creepy-ass mansion. Unfortunately, there is nothing to greet you but a cryptic and unsettling note from your younger sister, Sam.

The point of the game is to figure out where the hell your family is by searching for clues around the house, while hoping you don’t get axe-murdered and/or possessed by a ghost. Everything is spooky as fuck. Floorboards creak and lights flicker as you make your way through long, Shining-esque hallways. I have to confess, I started this game while I was home alone, but I got too scared and had to wait for my wife to get home to finish playing. So, you know, exercise caution.

Everything about the game just works, but, for me, Sam’s story is the standout here. It’s real and raw and not at all what I expected when I started playing. I was lucky enough to play this without being spoiled ahead of time, so I don’t want to give anything away for fellow new gamers. Just trust me: play it. 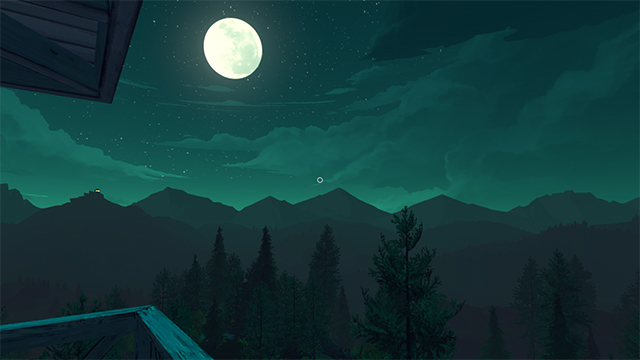 10/10 would play again just to wander around and take pictures.

So, Firewatch is the only game on this list that features a man as the main character (because misandry, obviously), but despite that it’s actually pretty great! You play as Henry, a middle-aged guy trying to escape the shitty reality of his life by working as a US Forest Service fire lookout one summer in Wyoming. Henry pretty much just wants to be alone and get drunk (relatable), but his boss, Delilah, keeps bothering him on the radio while strange things happen in the woods. The mystery is intriguing enough, but Firewatch really excels at portraying Henry’s quiet desperation and helplessness. He’s sort of an asshole (and he’s voiced by Rich Sommer, who played Harry Crane on “Mad Men,” which honestly probably made me think he was an even bigger asshole), but I still empathized with his situation.

Firewatch is a stunning game, full of rich colors and sweeping landscapes, so even if you think Henry is acting like a total ding dong there’s always something beautiful to see. The soundtrack is just about as strong as the visuals: it really heightens the suspense, and it truly is the rug that ties the room together, man. The gameplay is a little more difficult than Gone Home, especially because responding to Delilah on the radio is time-sensitive, and it’s easy to get turned around in the woods (or, at least, it was for me). Also, I somehow got stuck on a rock ledge and had to restart an entire day to get free, so I am clearly very good at video games. The ending is kind of a letdown, but the game is so damn pretty and the journey was compelling enough that I didn’t really care. 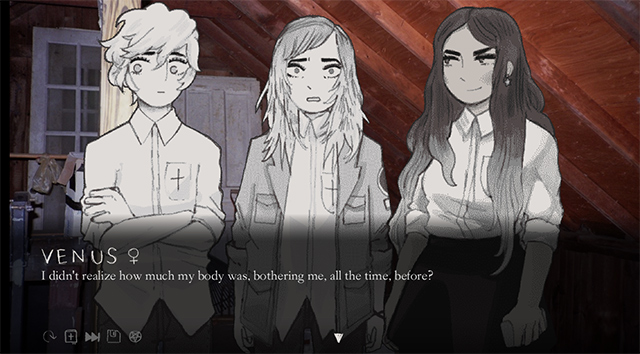 We Know the Devil is — not to put too fine a point on it — fucking fascinating. It is a totally different style than any of the other games on the list; the visuals consist of barely animated sketch-style illustrations over moody lo-fi photography, and the dialogue is written on screen instead of spoken. It’s basically a choose-your-own adventure graphic novella – and it’s awesome and queer. Also, the gameplay is super easy. For the most part, you just click anywhere on the screen to advance the text, but there are seven decisions to make throughout the game (and even then, it’s still a simple point and click interface).

In We Know the Devil, you don’t play as any one character. Instead, you follow the story of Jupiter, Neptune, and Venus, three friends trying to survive a summer spent at a religious camp. The make it to the last week of camp, but, as part of a vaguely-defined ritual, they are assigned to stay overnight in a cabin and wait for the devil to maybe appear. Or maybe the devil is already there. Over the course of the night, you decide which two friends to pair up and which will be left on their own. These decisions influence the character’s relationships with each other and the devil, and are the catalyst for how the game ends (there are four endings).

The details of the story are really nebulous, so it’s easy to recognize yourself in aspects of each character and assign specific, personal meaning to ambiguous bits of dialogue. Honestly, the first time I played through, I didn’t enjoy it that much. I think in large part that was because I had no idea what to expect and I rushed through. On subsequent playthroughs, however, I’ve savoured the story and the gorgeous language, and grown to really love it. There are certain moments in this game, moments that expose unnameable feelings I haven’t even thought of since high school, that are completely perfect. Also, for the record, the true ending is my favorite ending and I want to protect Venus at all costs. 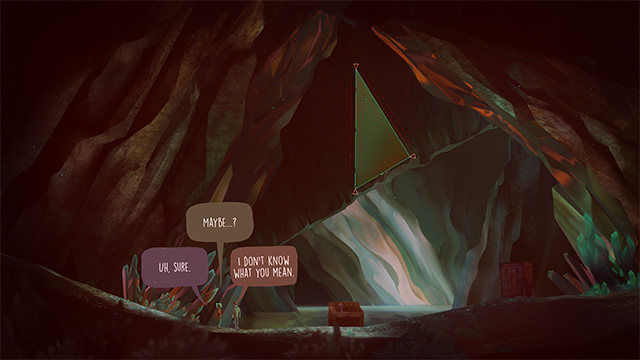 I promise I did not purposefully try to pick all creepy and/or scary games for this list, but somehow I did exactly that. In Oxenfree, you play as Alex, a high school senior with very cool blue hair and a brand new step-brother named Jonas. Even though Alex has literally just met Jonas that very day, she brings him to an overnight party on an abandoned island. (So aggressive!) Also attending the party: Alex’s best friend Ren (who is a bit of a Nice Guy™), mean girl Clarissa (who used to date Alex’s dead biological brother), and Clarissa’s best friend Nona. The teens accidentally open some kind of haunted portal thing and get separated, and it’s up to Alex to find all her friends and get them safely off the island.

In terms of gameplay, the Internet tells me that Oxenfree is 2.5D perspective, which basically means you see the characters from the side (like Mario), but there’s some depth occasionally. My only gripe with this layout is that the game feels way too zoomed out most of the time. You interact with other characters by selecting speech bubbles that appear over Alex’s head, and I really liked the variations provided. There is almost always more than one way to answer yes or no. Like Firewatch, there’s a time-sensitive element here, so if you aren’t quick enough at deciding/clicking, Alex won’t say anything.

This game is very creepy and it has quite a few jump scares. Again, I recommend a daytime playthrough (but I’m also kind of a wuss). There’s a subplot that basically takes you on a scavenger hunt to find a dead old lady’s letters, but I was straight-up panicking about ghosts and finding my friends so I looked for zero letters. At the end of the game, there’s sort of “where are they now” epilogue, and I enjoyed seeing what percentage of other players ended up making the same choices as me. I’m not sure if hooking up romantically with your step-bro is a possibility, but I did everything in my power to avoid that. I also tried to charm both ladies to no avail, so I don’t know if that’s a thing or not. So far, my main takeaway from gaming is: this would be better with queer women. 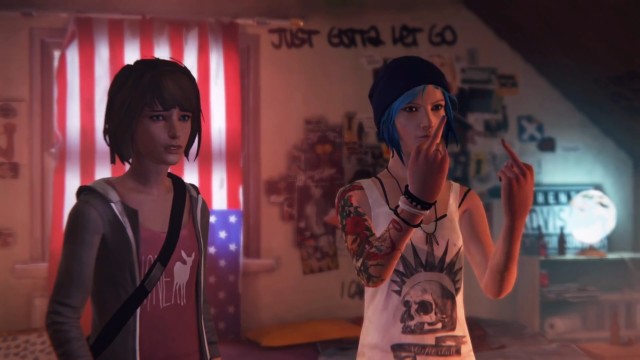 Welp, this game emotionally devastated me, and I’m still not okay about it! Go read Dufrau’s list of reasons to play, listen to the soundtrack on spotify, and join me in the depths of my melancholy nostalgia. You should play it now, before the recently announced movie makes its way into the world!

So, that’s what I’ve been playing lately, how about you? I would love recommendations on what I should play and/or write about next.