Game of Thrones returns on Sunday, and from the looks of things, it’s going to be a delightful time for us all. Two important items:

If you haven’t been following along at home, I’ll be honest: this is a tough show to catch up with. It has a huge cast of characters, everyone has very complicated motivations, and the show often moves at a breathtakingly ridiculous pace. Marathoning the show with a detail-oriented friend is probably the best way to catch up. Short of that: the basic premise is that we’re in medievalish times, magic is real, and everyone is fighting with everything they’ve got to gain power and have their family rule the seven kingdoms.

Early on in the show, Ellaria (a widowed, unofficial princess of Dorne), was established as bisexual and polyamorous during a visit to the brothel with her lover Prince Oberyn Martel. A couple seasons later, Yara (Queen of the Ironborns, a grim, seafaring people), was also shown with a female sex worker. In my eyes, these two are the most prominent, canonically queer women in the TV series. Daenerys (Queen Across the Sea and mother of three literal dragons) had a brief thing with her handmaid Doreah, but it largely focused on learning how to please her new husband, which feels categorically different to me. Maybe you disagree! Here’s some nuanced discussion about the show’s lesbian representation, if you’re interested.

Yara and Ellaria. Via Winter Is Coming.

Now onto the current order of the day. Does this look like a lesbian power couple to you? I’m not so sure. Ellaria’s definitely getting in there, but it’s not clear to me whether Yara is kissing back. Is that lust on her face, or is she opening her mouth in surprise/protest? We obviously need more information, but here’s my theory: what we’re looking at is actually another dead TV lesbian in the making, because this is a murder scene. DUN DUN DUN.

Here’s what we know.

Poison At The Purple Wedding

The first major poisoning we see within the Game of Thrones universe takes place at King Joffrey’s “purple wedding.” In S4E2, “The Lion and the Rose,” we see Joffrey largely ignore his new wife Margaery, choosing instead to threaten and belittle his uncle Tyrion. Following an ominous back-and-forth where Joffrey forces Tyrion to serve him wine, we see Joffrey cough, tense up, gasp for air, fall to the ground, vomit, convulse, and turn purple. Blood leaks out of his nose and bloodshot eyes, and in less than two minutes, he’s dead. The murder plot is a bit difficult to piece together through the show alone, but it’s very clear the books: Lady Olenna Tyrell slipped a poison known as “the strangler” into Joffrey’s wine to help her granddaughter Margaery take full control of the throne.

The strangler, of course, is entirely fictional, as it is made from the leaves of a plant found in the Jade Sea of Essos. We do, however, see some striking similarities between the strangler’s description and a real world toxic alkaloid. Here’s analytical chemist Dr. Raychelle Burks to explain:

Yup, it’s strychnine! Some facts straight from the CDC:

People exposed to high doses of strychnine may reach respiratory failure within the first 15 to 30 minutes of exposure. Other immediate effects may include agitation, apprehension or fear, restlessness, uncontrollable arching of the neck and back, rigid arms and legs, jaw tightness, difficulty breathing, dark urine, painful muscle spasms possibly leading to fever and to kidney and liver injury, and/or muscle pain and soreness. Nosebleeds aren’t mentioned, but it certainly makes for a striking visual. And it doesn’t disqualify strychnine, so I’m going to go ahead and say close enough.

Returning to the scene of the crime, you’ll note that Ellaria was nowhere near Joffrey or Olenna during the events, nor did she have anything to do with the transportation of the poison via a light blue gem on Sansa’s necklace. She was in attendance at the wedding, though, so we can surmise that she either witnessed the death or became aware of the very high profile poisoning shortly thereafter.

The Assassination of Myrcella

In the next poisoning of a Lannister heir, Ellaria takes a much more active role. In S5E10, “Mother’s Mercy,” we see Ellaria give Princess Myrcella a long, uncomfortable kiss on the lips as she says goodbye. Minutes later (the timeline is unclear because the implied rowboat travel to meet the larger ship takes place off screen, but it seems safe to assume 20 minutes or less), Myrcella gasps for breath, blinks confusedly as blood drips from her nose, and collapses into a quick death in her father’s arms. Back on the dock, Ellaria wipes away a very similar looking nosebleed, then removes the dark purple lipstick she had on while she was kissing Myrcella. She pulls a vial of light blue liquid from her necklace, takes a swig, and walks away, apparently no worse for the wear.

Unfortunately on this one there’s no corresponding book scene, so we have limited information about the toxin used. From previous plot points, we do know that Ellaria had access to lots of knowledge about poisons. Until Oberyn’s untimely end, Ellaria was romantically involved with “The Red Viper,” who studied poison at the citadel and used a spear dipped in manticore venom to painfully putrefy Gregor Clegane’s flesh.

Manticores don’t exist in real life (as far as we know), but we do have snakes, scorpions, and many other creatures with painful, deadly venom! Here’s National Geographic with wilderness medicine doctor Dr. Luanne Freer:

Within the GoT universe, we’ve been told that the effects of manticore venom cannot be stopped, only slowed, so it’s very unlikely that Ellaria would have chosen to expose herself in the process of poisoning Myrcella. A far more likely candidate is the poison Ellaria’s daughter Tyene uses in S5E7, “The Gift.” Tyene stabs Bronn in combat and taunts him when he slumps to the floor with a nosebleed not long after, explaining:

My dagger was coated with a special ointment from Asshai. They call it the Long Farewell. It takes time to work, but if a single drop makes contact with the skin, death.

Only after Bronn agrees that Tyene is the most beautiful woman in the world does she toss him the vial of light blue liquid antidote. His breathing returns to normal and he eventually makes it out alive. And that is all the information we have about the poison at this point! I looked up Asshai in a few Game of Thrones wikis, and it appears the city is in the far southeast of the continent of Essos, on the eastern shore of the Jade Sea.

Wait, hang on… that’s a weird coincidence. Could the strangler and the long farewell the same poison?

The Strangler and the Long Farewell 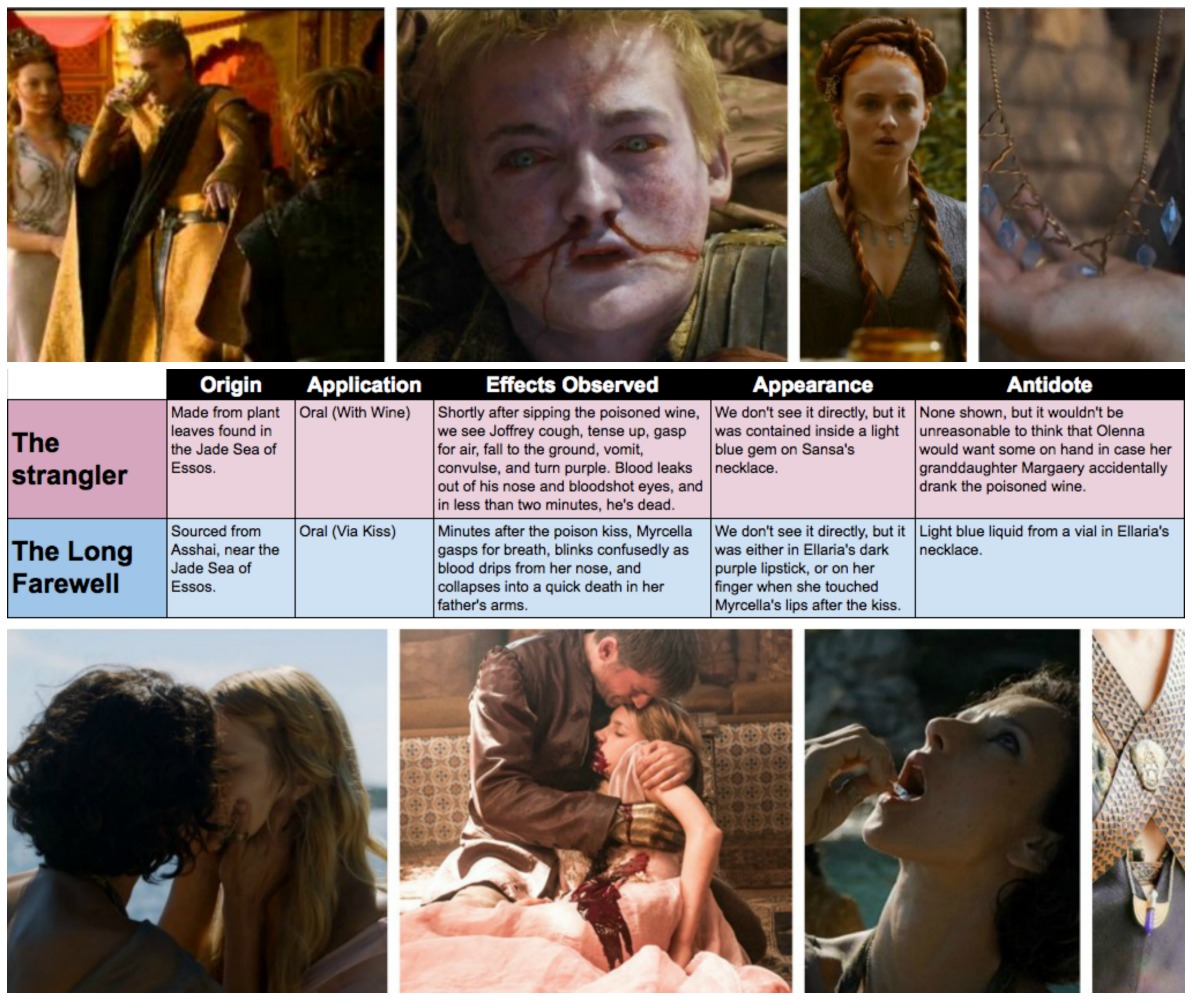 We know that both the strangler and the Long Farewell come from the same geographic location. When administered orally, they result in similar effects (gasping for breath, loss of muscle control, and nosebleeds). We don’t know what the strangler looks like, but we did see a container it was held in: a light blue gem on Sansa’s necklace. We also don’t know what the Long Farewell looks like (possibly Ellaria’s purple lipstick, possibly some inconspicuous liquid on her finger), but we do see the antidote: a light blue liquid, contained in Ellaria’s necklace vial. The antidote to the Long Farewell is in an opaque blue necklace, but when we see Ellaria remove the vial, the liquid appears light blue, similar in shade to Sansa’s necklace. Hmm!

Getting back to our theory that the strangler is a fictionalized version of strychnine, what does that tell us about the antidote? According to the CDC, there is no specific antidote for strychnine toxicity, but “treatment consists of removing the drug from the body (decontamination) and getting supportive medical care in a hospital setting. Supportive care includes intravenous fluids (fluids injected directly into a vein), medications for convulsions and spasms, and cooling measures for high temperature.” So if you’re poisoned by strychnine in real life, get yourself to a hospital; there is no instacure magic potion. Within the GoT universe, though, our frame of reference isn’t modern medicine, but medieval. And in those days, poison hemlock was the drug of choice to reverse strychnine effects. 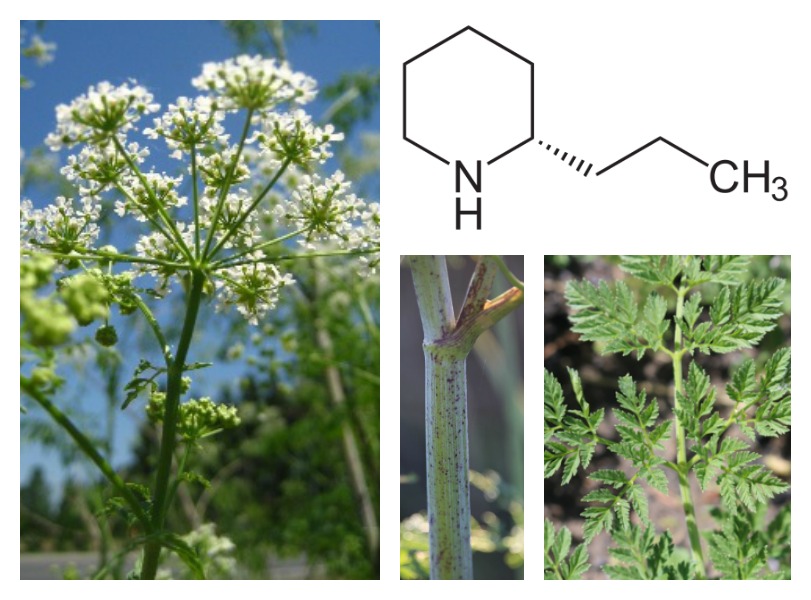 Like strychnine, poison hemlock is also a toxic alkaloid that can induce respiratory failure in humans. While strychnine enhances synaptic transmission to the end result of convulsive muscular contractions, though, coniine (the alkaloid of interest in poison hemlock) tends to relax and paralyze muscles. During medieval times, it was applied to “reverse” the effects of strychnine by visibly relieving muscle spasms. It isn’t a true antidote (nor is it blue), but again, I’m going to go ahead and say say close enough.

So now we have two suspected poisons, one of which is also an antidote. Why the two blue necklaces? It could be a weird coincidence. Or! What about this:

I hope it’s the third option, but I feel like it’s probably the first one. What do you think? Do you have any other theories or wild predictions for this season?