This May, Nepal’s national census will include a new category for transgender people, following a Supreme Court ruling that ordered the government to guarantee the rights of gay, lesbian, bisexual, and transgender people.

Sunil Baby Panta, Nepal’s first openly gay parliamentarian and a gay rights activist, says that this is excellent, but just the beginning:

“This shows that the government has started to recognize [transgender people]. I hope this will help to ensure their rights. But challenges remain for the community as they have often been forced to leave their villages and taken refuge in cities due to discrimination.”

Strides have been made quickly in Nepal, where just over three years ago, committing an “unnatural sex act” could result in up to a year in prison, though homosexuality was not explicitly illegal. Then in late 2007, the Supreme Court ruled that sexual minorities should be granted the same rights as other citizens:

“The government of Nepal should formulate new laws and amend existing laws in order to safeguard the rights of these people. Lesbian, gay, bisexual, transsexual and intersex are natural persons irrespective of their masculine and feminine gender and they have the right to exercise their rights and life an independent life in society.”

Now, equal rights are guaranteed under the constitution, same-sex marriage is legal, and Pink Mountain, a Nepalanese travel agency started by the Blue Diamond Society, a gay rights organization, is planning to hold gay wedding ceremonies on Mount Everest. And um, to be honest, IT SOUNDS REALLY F*CKING RAD, if translated somewhat awkwardly (“glamorous transgender”?):

When it comes to the wedding in the Himalaya, it is believed that the marriages are made in heavens and celebrated on Earth. It is the physical, mental and spiritual bonding of two souls.

Join your wedding participants at the refreshment venue after breakfast. A team of traditionally fashioned musicians and glamorous transgender will lead the wedding procession joined by your guests and dignitaries. Your transfer will be the highlight. It is either the ‘Maharaja’ style elephant or the medieval wagon type carriage pulled by horses or a modern luxurious ride (Sedan, limousine etc.). Yes ! We will make it a talk of the town. Wedding proceeds with the chanting, farewells and partying.

Honeymoon could not be less elegant. You will be airlifted for one of Asia’s best stay. Pokhara – the natural capital of Nepal, hosts world class luxury in such a close vicinity of Himalayan giants.

Whatever tradition you marry, the other equally important aspect of wedding is the memorable time spent together. What could be more special than being in the Himalayan Shangri-La, amid amenities and services to spoil you! Himalaya is no more remote with our courtesy. Jacuzzi, spa, private yoga, Ayurvedic massage and more, all in the amphitheater of animating Himalayas.

Nepal used to be the only Hindu kingdom in the world and many Hindus don’t view homosexuality favorably. But when Nepal went secular in 2006, small ethnic & minority rights groups began demanding equality or at least equal protection. 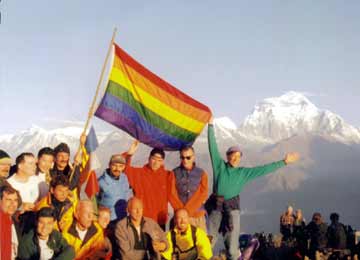 The tourism boom isn’t really a sign of incredible moral progress as it is indicative of a need to recover economically after years of political turmoil. Kishore Thapa, Nepal’s secretary of tourism, said, “[Gay tourists] spend a lot, and we want tourists who will spend a lot.”

An annual report by the government of Nepal stated that tourism contributed $372 million to the economy last year, and that officials are hoping to double that.

According to the Washington Post, not everyone agrees with the changes. Dipendra Ghimire, a hotel employee in Kathmandu, said: “I know countries like Thailand have been doing it, but for Nepal, I don’t think it is just appropriate.”

Another interesting sidenote — when Pant launched the country’s first travel agency for GLBTQ people, the first bookings he got weren’t from couples looking to marry but rather mostly from one specific group: gay Buddhists who wanted to meditate in Buddhas birthplace.

The Gay Buddhist Sangh, a European organization, says this in their charter:

We seek to introduce the teachings of the Buddha to LGBT (lesbian, gay, bisexual, transgender) folk in such a way that we honour and respect all beings and where they are in their lives, and help them to preserve a healthy and positive self-image, particularly about their sexuality.

‘We strive to provide a refuge and safe place where LGBT people can feel supported and valued as they cultivate the practice of these teachings and learn how to apply them in practical ways to their everyday lives. We do so for the benefit of ourselves, our community and all sentient beings,’ it says.

Still, many gays in Nepal still report unfavorable treatment by law enforcement and society — from harassment to rape – deterring them from being open about their sexuality. The

Moving from criminalizing sexual minorities and violent homophobia to recognizing transgender people on the census and attempting to base a tourism industry around gay weddings in a only a few years is unheard of. If an economic motive is what it takes to get that kind of change, then bring it.