Immigration activists are gathering across the US this week to demand the release of Nicoll Hernández-Polanco, a Guatemalan transgender woman currently held by Immigration and Customs Enforcement (ICE) in an immigration detention center for men in Florence, Arizona. Hernández-Polanco applied for asylum in October 2014, after experiencing transphobic and transmisogynistic sexual and physical violence for nearly a decade in Guatemala and Mexico. While in detention, she has faced continued sexual assault and harassment from ICE staff and other detainees.

Actions in Phoenix, Los Angeles, New York City and Washington, DC will call for two main demands: that ICE immediately free Hernández-Polanco from detention, to be housed and supported by Mariposas Sin Fronteras, an organization in Tucson, AZ, while her asylum case is processed; and that the White House and Department of Homeland Security take immediate action to define LGBTQ immigrants as a vulnerable group whose detention is specified in the President’s executive action memos to be “not in the public interest.”

In a letter to her supporters which will be read at the actions this week, Hernández-Polanco wrote,

Here in detention, unfortunately, I feel very discriminated and not protected. The conditions are very inhumane. Here they do not treat anyone with dignity, much less a transgender womyn like myself. 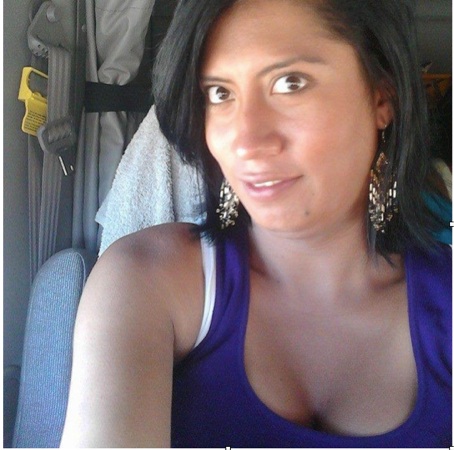 Unfortunately these cases are very common, and don’t get enough media or visibility. People don’t really hear about them. And so we just have to fight as much as possible to get even into the media. We feel that nationally, we have a lot of different partnerships, and so that really helps us get the word out and highlight the stories such as Nicoll’s. She needs all the support, and by doing a nationwide week of action, we can highlight the work that still needs to be done in order to free her.

Hernández-Polanco’s experiences in detention reflect reality for many, if not most, trans women detained in immigration facilities. As Fusion reports, while trans women make up 1 in 500 detainees, they represent 1 in 5 victims of sexual abuse. As we saw last summer with the case of Marichuy Leal Gamino, another trans woman detained in a men’s facility in Arizona — despite the fact that the Prison Rape Elimination Act creates regulations and protocol for reducing and responding to sexual violence in prisons, including detention centers — these regulations are implemented spottily, at best. Olga Tomchin, an advocate for Hernández-Polanco, Leal Gamino and other detained trans women as the Soros Justice Fellow for the Transgender Law Center, told Autostraddle,

“ICE has progressive policies that exist solely on paper: trans women are supposed to be housed with women; people are supposed to be given access to medical care right away; people are supposed to be allowed to choose the gender of the guards that search them; trans women are never supposed to be forced to shower with men. However, ICE is a rogue agency that never follows its own rules. There is absolutely no accountability. I’ve seen that the conditions for my clients are not improving. ICE has shown over and over and over again that they are totally incapable of detaining trans people with even minimal levels of dignity and safety, so they have no business detaining trans people.”

Tomchin says ICE claims to be “investigating” Hernández-Polanco’s case. They also say that because she has been deported in the past, she is classified as a “priority” for deportation under the terms of President Obama’s recent executive action. This is arbitrary. Unlike incarceration in prison, where people have been sentenced to serve a specific amount of time there, ICE detention is a holding mechanism, which detains people for an unspecified amount of time, until they have a hearing to determine if they will be deported or not, or before the hearing if the person is deemed vulnerable or with some other extenuating circumstance. However, ICE has complete discretion in determining who they will release and when. If ICE felt like it, nothing would stop them from releasing Hernández-Polanco tomorrow. 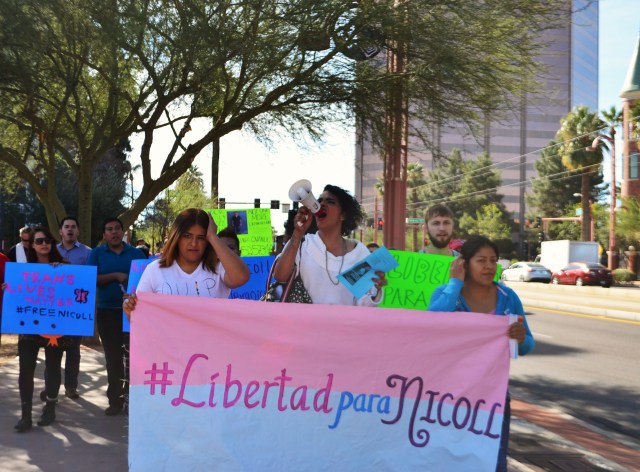 We have a place for her to stay. We also have our organization and she’d have support if she’s looking to get to English classes, if she needs medical attention or mental health care. We’d be able to connect her with a network of support of people here in our community so that she can begin to heal from all that trauma that she’s been undergoing and that’s been intensified by being detained in ICE custody.

Mariposas Sin Fronteras does extensive outreach and network building within the Florence and Eloy detention centers in Southern Arizona, offering legal support, bail money through the Rainbow Defense Fund, community visits and letter writing campaigns. It was through these networks that they initially connected with Nicoll. Alcaraz Ochoa explained,

Another trans woman was in detention earlier. We helped her get released. She called us a few months later and told us that her friend Nicoll was planning to enter the US and seek asylum. So once we got information on her and figured out where she was detained, we wrote to her and visited her, and now we’ve been in contact since October of last year as she seeks asylum in the US.

Mariposas Sin Fronteras, the Transgender Law Center and other organizations have been pressuring ICE to release Hernández-Polanco since late 2014, and in late January, community members marched to the ICE office in Phoenix calling for Hernández-Polanco’s freedom. ICE has refused, saying that they monitor complaints.

Cycles of Detention and Deportation

Hernández-Polanco’s case and her categorization as a “deportation priority” also highlights contradictions in the rhetoric pushed forward by ICE and the Department of Homeland Security. She’s been designated a priority because she has been deported multiple times and last entered the US in October, after the January 2014 cutoff, set by the President’s Executive Action documents. However, Tomchin said her multiple deportations are the result of her coming to the US to flee transphobic violence, being detained, and then consenting to be deported before her asylum hearings, just to escape the unlivable abuse she faced in detention. This is a common cycle. According to Tomchin,

“[If you are in immigration detention], you can decide that you can’t handle one more day in immigration detention. You can decide that you’d rather risk being killed back in your home country rather than spend one more day being raped and subjected to solitary confinement inside detention. ICE agents will come to people’s cells every day and basically will pressure them to sign deportation orders and give up on their asylum case. Most trans women will win their cases under existing asylum law, but ICE makes things so horrible for them that people just can’t go through with the process. That’s what’s happened with Nicoll.”

So while immigration rhetoric and asylum law claim to offer relief for vulnerable populations, including trans women, the actual conditions trans women face ultimately make them more likely to be deported, rather than less. The ongoing abuse of transgender women in immigration detention also highlights a glaring contradiction in President Obama’s lauding his administration for standing against persecution of trans people in the State of the Union. ICE personnel who have been harassing Hernández-Polanco are employees of the Department of Homeland Security, which is part of the executive branch. “As he does a victory lap on LGBT issues,” Tomchin said, “[the President’s] staff are torturing trans women, and we will not let him forget.” 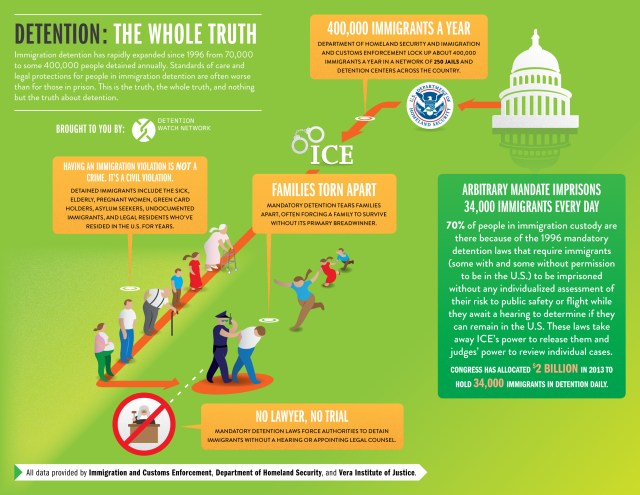 As Tomchin pointed out, the increased vulnerability for trans women like Hernández-Polanco, who have been detained and deported multiple times, who have any semblance of a criminal record, or who otherwise don’t qualify for protection under DACA and executive action, is connected to the financial mechanisms which drive the detention system. While DACA and executive action make fewer people eligible for detention and deportation, the “bed quota,” or the arbitrary number of beds required to be filled in immigration detention centers on any given night, has not been reduced. This means that the people who are not protected by DACA or executive action are more susceptible than they were before to deportation and long stays in detention.

Hernández-Polanco wrote further in her letter,

We need to be included, not persecuted, not targeted, not incarcerated, not discriminated. Release us from detention TODAY!

A wide coalition of immigration and LGBTQ groups across the country are working together to make Hernández-Polanco’s message heard, to draw national attention to her case, to speak out against the injustices faced by the LGBTQ community as a whole in immigration detention, and to demand freedom for Nicoll and all LGBTQ detainees. H Kapp-Klote, communications coordinator for GetEqual said in an email, “[Multiple actions show] that people all over the country are standing with Nicoll, and that the repercussions of  ICE and President Obama’s actions go far beyond Arizona, where Nicoll is currently detained.”

Because of all the recent trans murders — trans women of color, specifically — we have been meeting [in LA] these past two weeks, just to bring our community together and bring more awareness of what’s really going on. We feel like nobody’s paying attention… We’re going to continue the month of action by being in solidarity and joining the Free Nicoll action… The physical violence of murder and the physical violence and mental violence that trans women are suffering in detention – they’re very different struggles, but it’s the same pain, the same hurt for our communities and for these women who are suffering.

There are lots of ways to support the Free Nicoll Week of Action. Alongside the actions in Phoenix, Los Angeles, New York and Washington (details listed below), supporters can call ICE and demand they release Hernández-Polanco, sign the petition for her release or send her a letter of support. Hernández-Polanco is particularly interested in femme sparkly letters. She doesn’t speak English, so if you if you can write in Spanish, or translate your message in some way, that would be appreciated. Otherwise, follow your sparklefemme heart and send along the best message of support you can. 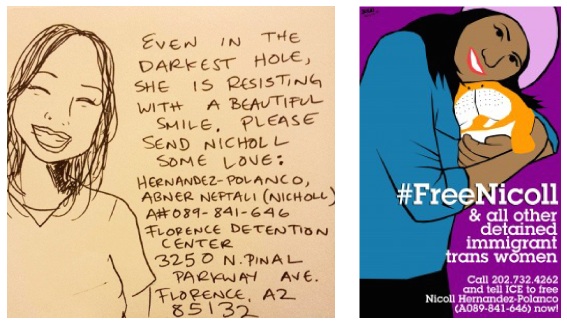