Marichuy Leal Gamino grew up undocumented in Phoenix, Arizona and dreams of attending cosmetology school. For over a year, she has been detained at the Eloy Detention Center, a men’s detention facility run by the Corrections Corporation of America (CCA), in Eloy, Arizona. Gamino is transgender, and she has reported being raped by her cellmate. CCA and Immigration and Customs Enforcement (ICE) have responded to her report completely inappropriately, and a coalition of groups are demanding her release using the hashtag #FreeMarichuy.

For the length of Gamino’s detention, she has been housed with men. While being detained in the men’s facility, she has experienced sexual harassment and threats, and since her assault two weeks ago, she has not been offered any recourse or treatment. Instead, she has been agitated and subjected to further abuse by detention center officials. 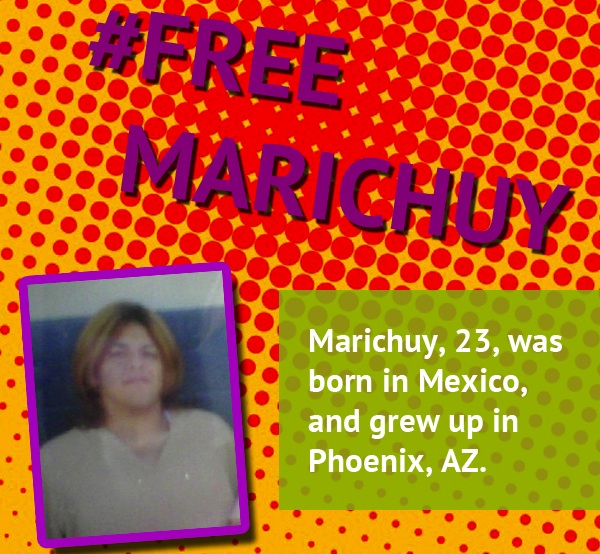 via Not One More Deportation

After her initial report, Gamino was reportedly encouraged to sign a statement claiming that she had consented to her rape, which she refused. When she later reported immigration officials she was feeling suicidal, she was put in solitary confinement for two days. Activist groups are calling this transfer to solitary a retaliatory move for reporting the attack.

Gamino’s situation is not unusual for transgender women being held in immigrant detention, as a Center for American Progress report outlined last year. It is common for transgender women to be detained in men’s facilities, and also common for them to be subject to sexual assault and harassment. Putting transgender people in solitary confinement “for their protection” is also a widespread practice in detention centers, despite the fact that there is widespread knowledge that solitary confinement has profound long-term consequences for LGBTI detainees. And everyone.

Technically, regulations, from both the Department of Homeland Security (DHS) (which oversees administration of immigrant detention facilities) and the CCA, are in place that would protect Gamino and other transgender people from harassment and abuse. The Prison Rape Elimination Act (PREA) was implemented in facilities run by the DHS two years ago, and it includes specific guidelines to address the specific issues LGBTI people face in detention. Facility staff are supposed to receive training on LGBTI issues, and appropriate housing for transgender and gender non-conforming people is supposed to be determined on a case-by-case basis. CCA policies have “zero tolerance” for sexual abuse and sexual harassment, and they also specify that they have a “prohibition on any inmate or detainee having authority or control over another.” ICE claims that the detention center where Gamino is being held adheres to PREA standards and that Gamino’s situation will be investigated; however, it is obvious that these policies are not being adhered to in Gamino’s case, or are just simply insufficient to actually prevent these assaults. In an interview on Ronan Farrow Daily, Tiq Milan from GLAAD noted that 59% of transgender people in immigration detention facilities report being sexually harassed. Gamino herself noted in an interview with Fox 10 Phoenix, that detention center staff did nothing to prioritize her safety. “They don’t do nothing until something happens,” she said. 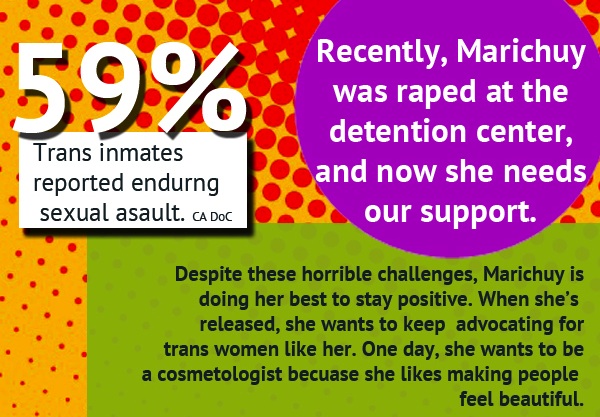 While many regulations are in place to outline how detention center staff and officials should respond to instances of sexual assault or harassment, very little oversight exists to ensure that these regulations are actually enforced or carried out, leaving detainees like Gamino with little protection or power to advocate for themselves within the system.

Karolina Lopez, another transgender woman who was once detained in Eloy, told the Transgender Law Center, “What’s happening to Marichuy is not so different from what I went through, or what I saw other trans women in Eloy experience. I was harassed by two men, then placed in solitary confinement. …I still have fear of small spaces, and of officials. If ICE actually cares about Marichuy’s security, they should let her go.” 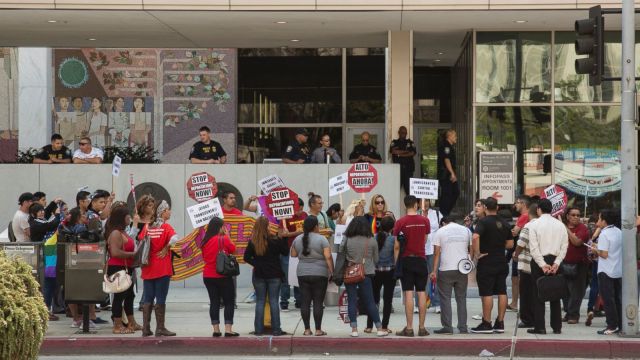 Protesters call for Gamino’s release in Los Angeles via Fusion

A coalition of organizations have created a petition demanding Gamino’s immediate release from ICE custody. Francisco Luna, of the Arcoiris Liberation Team, said in the statement put out by the coalition, “ICE has shown that they are incapable of ensuring Marichuy’s protection from future assaults or retaliation for reporting the awful sexual abuse she has survived. We see no other solution than for ICE to immediately release her, where her community can help her heal.” Olga Tomchin, of the Transgender Law Center, added, “As a result, they should not be detaining transgender women, period.”

On top of this complete failure of ICE to respond appropriately to (or prevent) her assault, Gamino also faces possible deportation, which would separate her from her family and community support networks. “I’m asking to stay right here because I got all my family right here.” Gamino also noted that she fears transphobic violence if she goes back to Mexico, telling Fox, “If I go back, most likely I’m going to get killed.” Fox 10 Phoenix also reported that Gamino has a forthcoming immigration hearing on August 19th.

As Lopez and Tomchin pointed out, is important to note that while Gamino’s case has reached national attention, and is certainly horrific, hers is one example in a system that subjects millions to sexual violence, as well as other forms of physical and emotional violence and separation from family and community support. Gamino’s case, and the complete disinterest of ICE, DHS and CCA in treating people with any shred of dignity, indicates the extent to which the immigration detention system, and the prison industrial complex at large, are completely inept at “protecting” communities or those held within their walls. Gamino deserves to be free, and this system needs to stop.

You can sign on to the petition to Free Marichuy at Not One More Deportation, and you can see the full clip with Gamino from the Eloy Detention Center here:
FOX 10 News | myfoxphoenix.com