The collective QPOC Speakeasy has responded to the Mike Brown’s killing and the events in Ferguson here. Please read & share their powerful words!

On Saturday afternoon, Mike Brown was murdered by a Ferguson police officer. He was unarmed. His death, just the latest in a dizzying list of black people killed by the police just in 2014, inspired national mourning and righteous anger. Combined with the unconscionable and pervasive media bias against black residents of Ferguson, which have employed egregious and incorrect anti-black narratives in lieu of reporting the facts, this has also produced powerful discussions like the “What Picture Would They Use?” phenomenon.

In the wake of his death, vigils and peaceful protests were organized. On the very first day of protests, police mobilized dogs, tear gas and tanks, despite the fact that protests were peaceful and only a small, unorganized group of people engaged in any looting or disruption.

Wednesday night, three days after the shooting, the police department created a retroactive curfew; although the police chief had previously indicated that there was no curfew, after darkness fell police mobilized tanks, riot gear and less-lethal weaponry and began attacking peaceful protesters and media. They used tear gas, rubber bullets and wooden pellets, which were fired directly at peaceful protesters and into the backyards of residential homes. Protesters were herded into residential neighborhoods, and while they were told to get out of the streets, police cut off the routes that would allow people to return to their homes. Rumors that a water bottle was thrown at police have not yet been confirmed. There is an image of one can of tear gas being thrown back at the police in riot gear after it was thrown at an unarmed protester. TruthOut has a summary of the events of last night, including a video and transcript.

Media were also cut off from their news vans and had to take shelter in sympathetic private homes. Two journalists, Washington Post’s Wesley Lowery and Huffington Post’s Ryan J. Reilly, who tried to take shelter in a McDonalds’, were arrested for “trespassing.” They assert that they were never read their Miranda rights. St. Louis alderman Antonio French, who had consistently remained at the protests and documented them via social media, was arrested, although he says he was never told on what charges. Media were told to shut off their cameras, and many reported being menaced with assault rifles if they refused. Al Jazeera reporters say that they were tear gassed and that their cameras were confiscated when they escaped from the gas in what appears to be a deliberate strategy to suppress media documentation. This seems to have backfired, as that entire incident was recorded.

To be clear, the safety and rights of the residents of Ferguson and the way they were violated is the major reason for concern in this story; the suppression and violence against media is also important, but primarily in regard to the way in which it suggests police wanted freedom to attack peaceful Ferguson residents without proof or consequences. 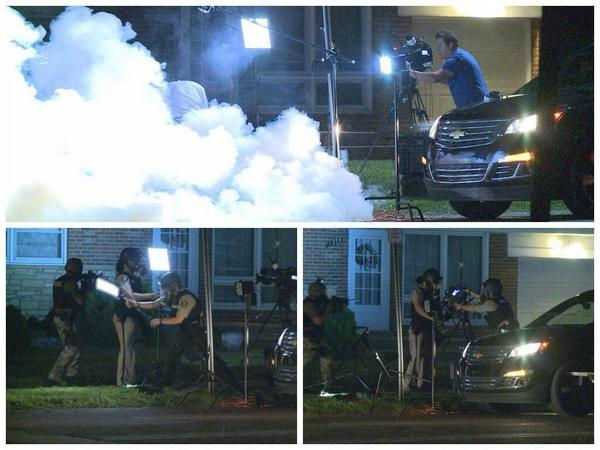 The live feed from Ferguson that was broadcast last night is available here. Since then, Missouri’s governor has pulled St. Louis police from Ferguson. Obama’s statement, delivered a few hours ago, was disappointing; he chose to condemn “violence against the police” and “looting” before even mentioning the occurrence of “excessive force” and violation of First Amendment rights, despite minimal evidence of the former two items and a wealth of evidence of the latter.

UPDATE: According to KSDK, the FBI will “oversee all operations, protests and other activities in Ferguson.” Local police forces will now operate under the authority of the FBI, although this does not necessarily mean a decreased police presence.

How Is This Illegal? Let Us Count The Ways

It is broadly considered illegal to shoot someone with a gun and kill them. This is true even of police officers, with the exception of a few situations that are supposed to be rigidly restricted and investigated: According to the Constitution, police officers can shoot to “protect their life or the life of an innocent party,” or to prevent the escape of a suspect if the officer has probable cause to suspect that person of a violent felony.

In regard to the first guideline, the officer does not need to demonstrate that there was a threat to anyone’s life, but that it was objectively reasonable for him to believe there was. This does introduce a wide swath of gray area, but as Vox explains, “According to the St. Louis County Police Department’s account, the officer who killed Michael Brown fired one shot from inside the police car. But Brown was killed some 25 feet away, after several shots had been fired. To justify the shooting, the officer wouldn’t just need to demonstrate that he feared for his life (…) when Brown was by the car, but even after he started shooting and Brown started running away. The officer would need to establish that, right up until the last shot was fired, he felt Brown continued to pose a threat to him, whether he actually was or not.” It seems fair to say that the only way this belief would have been “reasonable” on the officer’s part is if you hold that black people and especially black men are dangerous just by virtue of being alive.

Also via Vox: In terms of investigating Brown’s death, there are supposed to be multiple lines of inquiry. Criminal investigators look into a police shooting like any other shooting and determine if the circumstances constitute “permissible homicide” or actual homicide, which constitutes a crime. There’s also supposed to be an internal department investigation to discern whether the officer violated the department’s use-of-force policy. In the case of Brown’s shooting, the FBI is also investigating whether the police violated civil rights law, which is a separate question than whether the officer’s shooting was justified. The ACLU of Missouri has also filed a lawsuit to obtain information related to the shooting.

You Have the Right to Assembly

The First Amendment of the Bill of Rights states that “Congress shall make no law … abridging … the right of the people peaceably to assemble.”

“I obviously respect law enforcement’s work to provide public safety, but my constituents are allowed to have peaceful protests, and the police need to respect that right and protect that right.” – Missouri Senator Claire McCaskill

You Have the Right to Record Police

Both citizens and journalists have the right to document and record the actions of the police. From the Verge: “…federal courts have held consistently that citizens have a First Amendment right to record the police as they perform their official duties in public. And the US Department of Justice under Obama has affirmed the court’s stances by reminding police departments that they’re not allowed to harass citizens for recording them.” It’s also illegal for the police to seize or search your phone without a warrant. The ACLU explains further.

What You Can Do to Help

Attend a #NMOS14 (National Moment of Silence 2014) vigil in your city today at 7 p.m. EST/4 p.m. PST. Spearheaded by @FeministaJones, this movement aims to memorialize and mourn those killed by police, including Mike Brown, and focus on their lives and personhood. If you attend, wear a red armband and consider bringing extras for other attendees.

Donate to a bail and legal fund for protesters arrested in Ferguson. Your money will go towards bail, legal funds, fines, and other expenses.

You can also donate to a supplies fund on the ground that will help with food, gas masks, and more:

You can also donate to Mike Brown’s family to help with their legal costs as they pursue justice for his death.

If you’re looking for a way to do good during this time of unrest, @StraubsMarkets has made it easy. #MichaelBrown pic.twitter.com/BOf8e5GW2y

School has been canceled in Ferguson since Monday, which can lead to food insecurity for some children who may rely on school lunches to eat. A schoolteacher has partnered with the City Council of Ferguson/Florissant to work on providing food for these kids; you can donate to help their efforts here.

Generally and most importantly, especially if you are a white person, follow the lead of the black people of Ferguson and black organizers elsewhere; listen to find out what’s needed rather than making assumptions.

What You Shouldn’t Do to Help

Even in the interests of raising awareness, do not circulate images of Mike Brown’s body or of the bodies of other black people killed by police. This is against the wishes of Brown’s family and can be traumatizing to viewers of it.

Instead, circulate images of the illegal activity of police and the contact information for the Missouri governor, Ferguson mayor and Ferguson’s chief of police. Encourage people to call and remind them that the world is watching and holding them accountable for their actions.

Don’t attend or promote anything having to do with a “Day of Rage.” This movement has not been created with the input of communities of color, and the organization of an angry protest is likely to result in increased incarceration of and violence against black people and other people of color.

This post will be updated with important information as it develops.