The Center for American Progress recently released a report that details the inhumane treatment faced by LGBTQ people currently detained in the U.S., awaiting immigration and asylum hearings. Here are some things you need to know from that report about what LGBTQ immigrants face in the detention system, and the fight to resist these massive injustices.

1. Immigrant detention is different from jail. 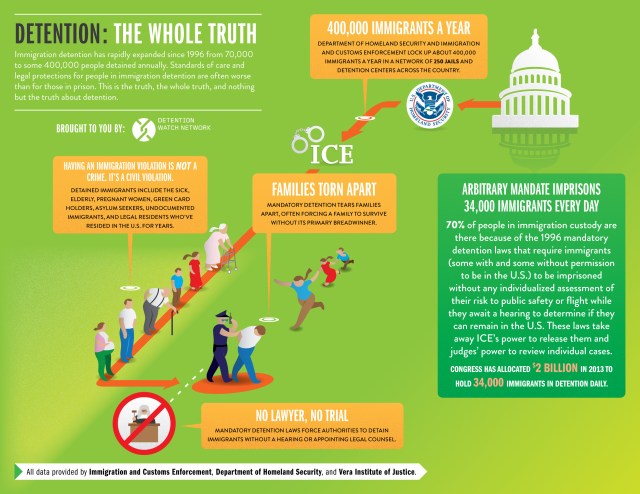 Because immigrants aren’t on trial for a crime, people facing hearings that determine whether or not they can remain in the U.S. are not entitled to free legal counsel. The Florence Immigrant and Refugee Rights Project (FIRRP) in Arizona is an organization that provides some legal assistance to immigrants facing hearings. Dorien Ediger-Seto, FIRRP Development and Outreach Coordinator, explains:

“Navigating the immigration system is really complicated… approximately 84% of people detained in Arizona go through the deportation process without an attorney. The Florence Project provides people with assistance in preparing their own cases and places a limited number of people with volunteer attorneys because it’s really helpful to have someone in the courtroom who understands the law. This is especially true for LGBTQ-based asylum claims — they are often very complicated but possible to win, though this isn’t ever a guarantee.”

Immigration is one of the most complicated areas of U.S. law. Without access to legal representation, immigrants facing deportation are less likely to know their rights or the availability of different programs or visas that could help them stay in the U.S. Legal counsel is also critical for LGBTQ immigrants because many of the protections that exist for LGBTQ people within the immigration system only occur if a formal complaint or request is filed with an attorney.

Community Initiatives for Visiting Immigrants in Confinement (CIVIC) is another organization that works with detained immigrants, and they’ve laid out the various options and avenues immigrants are working with: 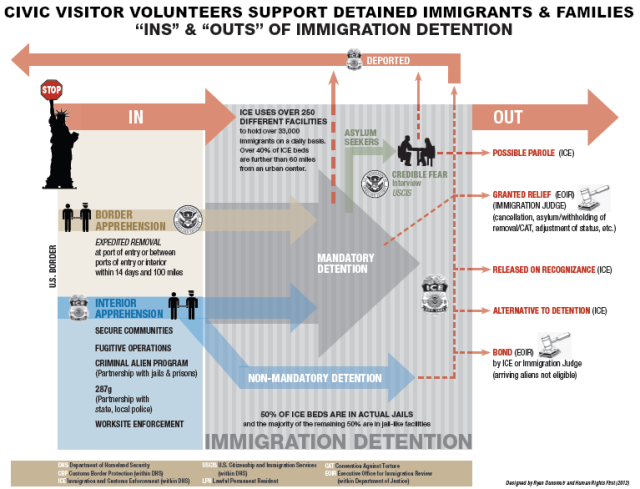 Often referred to as “protective custody,” detention centers sometimes place LBGTQ people in isolation to prevent assault and harassment from other people in detention. The CAP report discovered that this “protection” was prompted by things like presenting “effeminately,” or after being assaulted by other detained people. In solitary confinement, people are known to experience major psychological effects, such as panic attacks and paranoia. People placed in solitary confinement after being assaulted reported reliving their attacks, and having guards encourage the other detained immigrants to harass them during their allotted hour outside their cells. 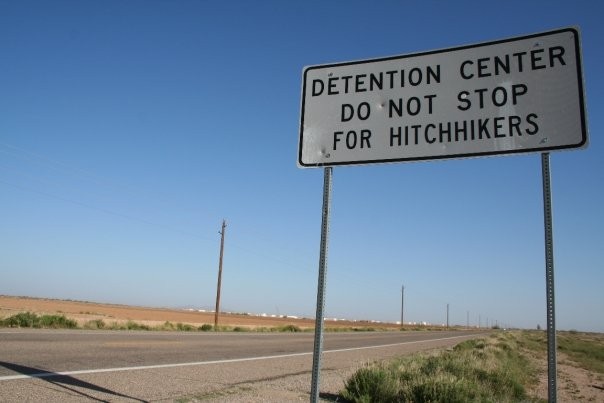 All immigrants are vulnerable to sexual assault and harassment in detention centers, particularly because of the isolation faced by people who do not speak the same language as guards or other detained immigrants. The CAP explained:

“Since immigration detainees are detained by [the Department of Homeland Security (DHS)]—the same agency that has the power to deport them—guards in these facilities have a high degree of control over detainees, who may believe the guards are able to impact decisions concerning their deportation status.”

Even though the 2011 Immigration and Customs Enforcement (ICE) standards for its detention facilities included access to hormone therapy for trans* people, trans* people are not actually guaranteed access to it. Ediger-Seto added, “When the standards are updated, it doesn’t mean every detention center is updating. Some detention centers are still operating under the 2008 standards, and even then they aren’t enforceable.” Because these standards are not enforceable, there is no institutional accountability. The CAP also reported that LGBT HIV positive people have faced harassment and difficulty obtaining medications. 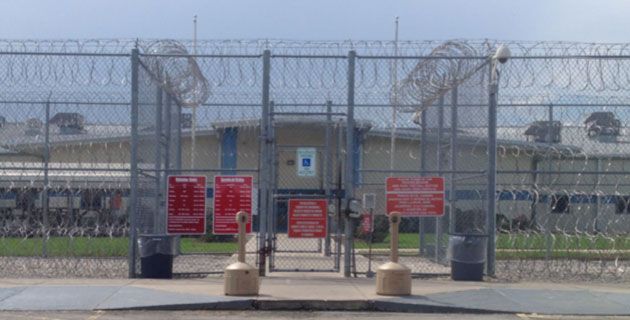 6. Even where ICE says they are protecting LGBTQ people, they still face discrimination and harassment.

Trying to mitigate the problems faced by LGBTQ immigrants in detention, ICE created a detention facility in Santa Ana, California just for LGTBQ immigrants. But CAP indicated that Santa Ana fell far short of respecting the identities of the people there:

“Visitor volunteers from [CIVIC], documented incidents of guards telling transgender, asylum-seeking women to ‘use their male voice’ and ‘act male’ and using male pronouns when speaking about them to others. The organization also found that transgender asylum seekers who were transferred to the facility did not have access to hormone therapy for one to four months…”

Ediger-Seto also noted that the know your rights presentations that the federal government sponsors in some detention centers are not offered to people at Santa Ana.

7. Though immigration reform is on the national agenda, most possible measures won’t improve circumstances for LGBTQ immigrants. 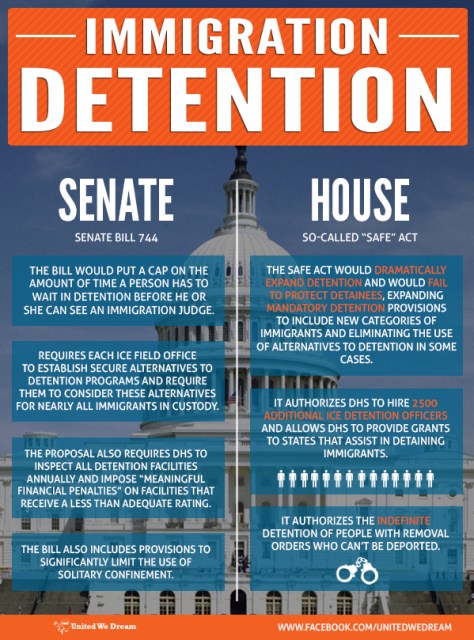 Several of the proposed bills from the U.S. House and Senate under the umbrella of “Comprehensive Immigration Reform” include safeguards for LGBTQ people in immigrant detention and offer expanded legal protections or services for LGBTQ immigrants. But most of these bills carry the condition of expanded border patrol and enforcement, which increases the overall chance for LGTBQ people to find themselves in immigrant detention, facing deportation and violence at the hands of law enforcement.

The Fight to Resist These Injustices

Immigrants Are Organizing Inside Detention Centers

Ediger-Seto wouldn’t let me off the phone without telling me about the organizing happening within detention centers against the mistreatment of LGBTQ people:

“What the [CAP] report doesn’t say is that people in detention are organizing to educate their peers and advocate for themselves, and I think that’s something we don’t talk about a lot. Once, I worked with a person who had regular meetings with a supervisor at the facility to be like, listen, if something happens to me because I’m trans*, I’m going to tell you.” 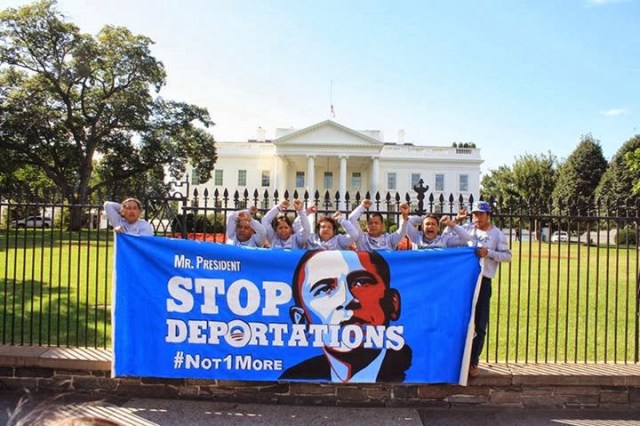 People are speaking out to demand justice for the undocumented and queer community.

Julio Salgado’s “I am UndocuQueer” project highlights undocumented queer immigrants across the country, announcing their presence in the immigrant justice movement. 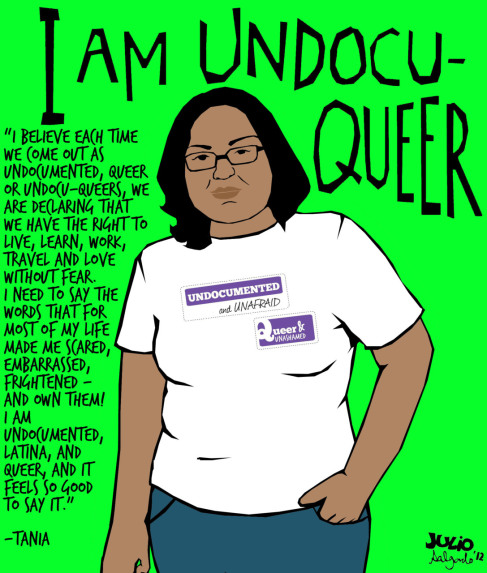 People are standing up all over the U.S. to protest immigrant detention.

From the Dream 9 and Dream 30 to the actions to shut down ICE detention centers and stop deportations across the country. Communities are coming together to demand justice for immigrants.