We’re trying a new approach with our news coverage starting this week! Instead of posting two link roundups per week, as we’ve been doing, we will instead post at least two stand-alone stories throughout the week, with one longer link roundup at the end of each week. Thank you for reading!

This week, as the nation continued grieving the deaths of Philando Castile and Alton Sterling at the hands of police — and continued to learn about new ones, like Alva Braziel — protests were carried out across the country. Marchers blocked traffic in Chicago and marched to the governor’s mansion in Atlanta. In Oakland, protesters shut down both sides of I-880. Over the weekend, over 200 were arrested after protests in Baton Rouge, including activist and former candidate for mayor of Baltimore DeRay Mckesson, who was charged with “simple obstruction of a highway.” Other protestors, like Brittany Packnett, say that Periscope recordings of the protest prove that DeRay was on the side of the roadway line that officers had told them to stay on, and was arrested without cause:

“Deray was arrested last night while we protested for Alton Sterling in Baton Rouge. police directions were to stay on the shoulder as we walked back toward BRPD along Airline Highway. An officer approached him saying, “you with the loud shoes-if you step back into the street you’ll be arrested.” Deray remained with other protestors in our group on the shoulder, not crossing the line into the street-a fact proven by several periscope videos, including his. Just a few moments later, multiple police crossed onto the shoulder, tackling Deray and arresting him. 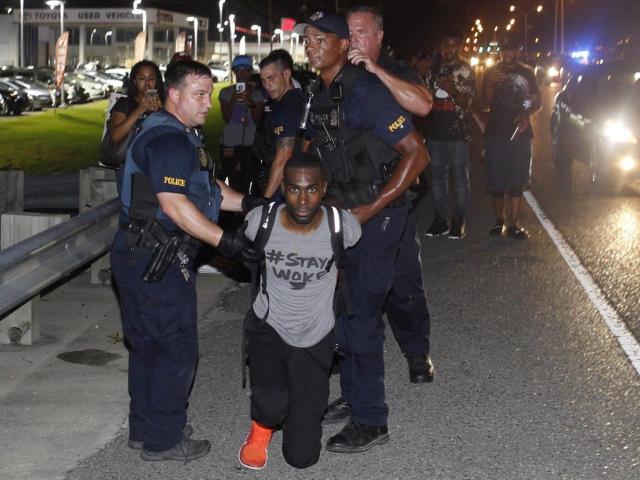 Mckesson was released on Sunday, and gave a statement saying that he believed his arrest was unlawful.

In Dallas, the city is still reeling from the sniper attack that followed a peaceful protest last week and took the lives of five Dallas police officers. President Obama has visited the city and today gave remarks at an interfaith memorial service for the officers. He was also joined by George W. Bush, who moved to Dallas after the end of his term.

In the midst of the painful and frustrating national conversation on policing, racial justice and why so many lives are being taken in the course of routine police interactions, many are also focusing on the Dallas police department’s tactic for taking in Dallas sniper Micah Xavier Johnson: a mobile robot armed with C4, which detonated a wall behind Johnson and killed him. CNN has more details on the robot, which they say was purchased by the department in 2008 for $151,000. It doesn’t seem to be totally clear whether this particular robot came through the 1033 program, which allows local police department to purchase surplus military equipment, but according to NPR, “The Pentagon’s 1033 program, which supplies military weapons and vehicles to law enforcement agencies across the country, distributed 479 [explosive ordnance disposal] robots between 2006 and 2014.”

Although it isn’t new for law enforcement to use robotics, with past examples ranging from defusing bombs to delivering pizza to a suicide risk to coax him down, this is believed to be the first time US law enforcement has used it to kill a person. (This isn’t a new military use, however; “U.S. soldiers in Iraq have used similar robots to deliver explosives, arming them by duct-taping bombs to the device.”) According to CNN, robots can be fitted with different mounts to use items like:

One concern about the use of robots by law enforcement is what policies will govern their use (and if they’ll be enforced). Law professor Elizabeth Joh told NPR that “the effort to develop clear policies may result in a patchwork of local regulations similar to those for drones and body cameras.” It’s not clear how many robots like this are owned by police departments around the country; although those that come through the 1033 program are easier to count, there aren’t necessarily numbers on those bought from private companies like Northrop Grumman. The robot used in Dallas is reported to have “sustained minor damage to the extension arm and is still functional.”

These issues will remain on the minds of communities across the US as we head into the Democratic and Republican National Conventions, beginning on July 25 and July 18 respectively; it’s virtually certain that protests and direct action will continue in Philadelphia and Cleveland as activists work to bring greater attention and accountability around those being continuously lost to police violence.