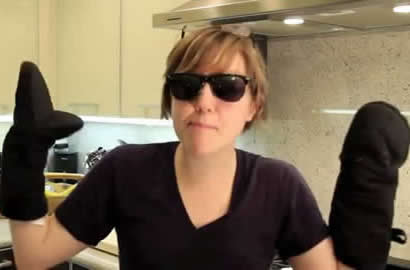 Well hello! My Drunk Kitchen’s Hannah Hart kicked off season 2 of everyone’s favorite internet “cooking” show with a special treat: high definition. Now you can see every detail of Harto’s adorableness/creative hat choices in a higher quality than when you Skype your parents! All right!

In this edition of Drunken Antics With A Lesbian You Wish You Were Cuddle-Friends With, Hannah cooks a meat pie, which is the most wicked food she can think of and surprisingly does not act as a double entendre at any point in this video. Among other excellent moments, Harto offers advice to aspiring chefs, now that she’s a successful culinary artist: “Some people say you should read the whole recipe before you start to cook. I say, don’t ever do that because then you will immediately not want to cook.” Truly, she is one of the greatest minds of our generation.