The following Moonshot review contains significant spoilers for the movie Moonshot, so if that’s something you care about, don’t read it! Seriously, I’m basically going to say the entire plot of the movie Moonshot.

As a Zenon Gay — by which I mean as a queer person who was once, prior to coming out of the closet, so thoroughly obsessed with the Disney Channel Original Movie Zenon: Girl Of The 21st Century — I went into the new HBO Max movie Moonshot hoping for some Zenon vibes. The trailer, after all, had Zenon vibes! Lana Condor, who plays opposite Riverdale’s Cole Sprouse in the spaceship-set rom-com that follows the Fake Dating trope to a tee, appears in the trailer wearing a very Zenon chic fit. It’s basically a dress made out of tinfoil. Upon seeing the tinfoil dress, my girlfriend said: “Okay, Zenon.” 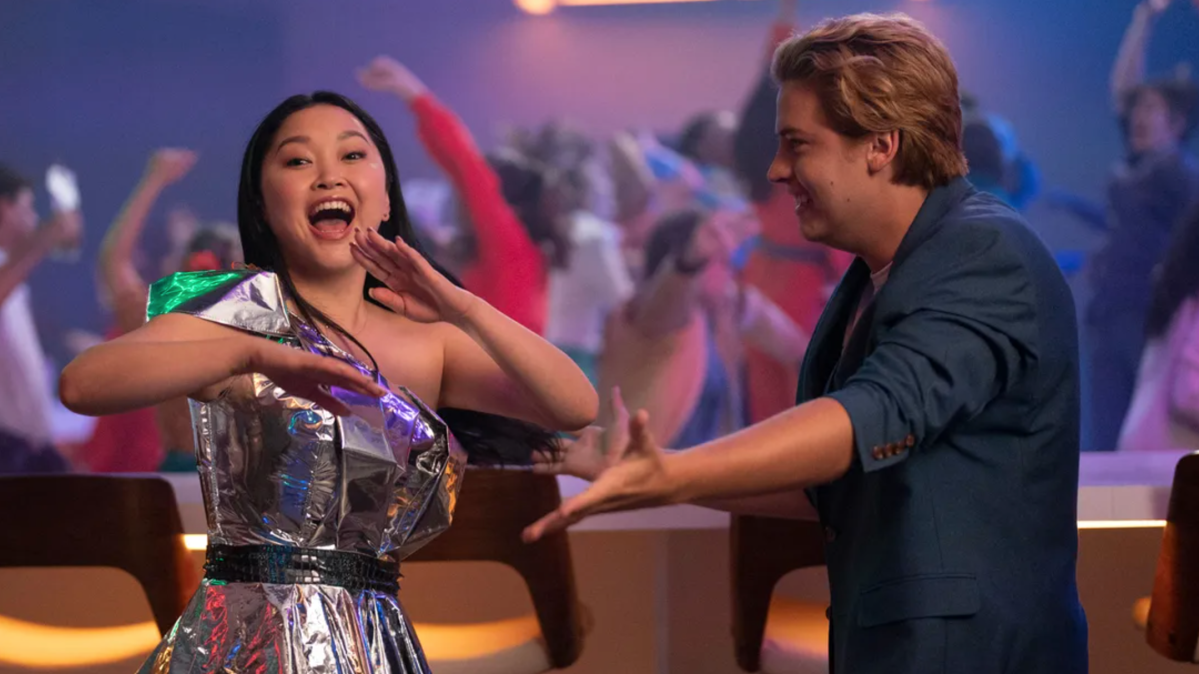 The trailer also appeared very heterosexual (minus the Zenon chic tinfoil dress, which feels distinctly bisexual), but I was informed by my esteemed colleagues that the movie does indeed include a pair of space gays.

After watching the actual movie instead of just overanalyzing the trailer, I learned that those space gays specifically comprise Celeste and Tabby. They’re played, respectively, by Sunita Deshpande (of Daredevil!) and Cameron Esposito (who recently appealed to Space Gays across the galaxy by kissing Battlestar Galactica’s Grace Park). Celeste and Tabby are, I’m fairly certain, space scientists of some sort. They have been dating for nine years but for some reason don’t want to get engayged until they’re suddenly inspired by the fake love of two young ostensibly straight people who actually hate each other (yes, Moonshot employs both Fake Dating and Enemies-To-Lovers at once and yet fails to really understand the appeal of either?) to finally pull the trigger.

In my opinion, Celeste and Tabby shouldn’t be together! I am not happy for them! Why did it take nine years of one of you saying you wanted to be engaged and the other not wanting it! Break up! Just because you’re stuck on a spaceship together doesn’t mean you have to do this! I’ve said it before, and I’ll say it again: Everyone in space is gay. Celeste and Tabby should know that, because they are (I think?) scientists, and it is an empirically provable fact that everyone in space is gay. Ergo, there are plenty of fish in the sea. Just break up and date another space gay. I think I would have found Celeste and Tabby infinitely more interesting if they had broken up!

While I am not happy for Celeste and Tabby, I am very happy for the captain of the Mars-bound spaceship on which Celeste and Tabby get engayged. Captain Tarter, played by one of my favorite scene-stealers Michelle Buteau (who you may recall from Happiest Season), is THRILLED for the excuse to throw a gay ass engagement party in space, and I find her enthusiasm for galactic queer dance parties deeply relatable. (Condor’s Sophie wears the tinfoil dress to the gay engagement party, which feels fitting.) My first complaint about Moonshot is that it should have about 60% more Captain Tarter.

Unfortunately, that is the first of many complaints I have about Moonshot.

At the end of the day, do I really care that Celeste and Tabby are a cringe couple? No. Queer couples being just as cringe or ill-matched as some straight couples in rom-coms is GAY RIGHTS. I went into Moonshot hoping for gay Zenon, and gay Zenon it was not. I mean, sure, those hopes were foolishly high given that the queer characters are mere tertiery characters. But I at least hoped to have some supernova fun. Rewatching Zenon would have been more fun!

In a way, the plotline follows a sort of reverse Zenon trajectory in the sense that instead of a young woman ejected from space as punishment and forced to live on Earth where she doesn’t fit in, Moonshot follows a young man willingly ejected from Earth and bound for Mars because he idolizes an Elon Musk-like man . Zenon doesn’t fit in on Earth, because she’s weird. Walt doesn’t fit in on Mars because he’s poor. (I feel compelled to note here that the moon is never mentioned in the movie, nor does she appear. I really don’t understand the title at all and I think it should have been called The Fault In Our Mars.)

Okay, here’s what Moonshot is about. Again, bizarrely, NOT the moon! Walt (Sprouse) is a barista who has always dreamed of life on Mars, which has been colonized by a private company by a billionaire named Leon Kovi (Zach Braff which, honestly, perfect casting). There are two ways onto Mars: a rigorous application process for which the criteria are unclear but definitely favor smartypants, which Walt is not, or a commercial ticket costing nearly a million dollars. Walt meets a girl on Earth and spends one wild n carefree night with her only to learn it’s HER LAST NIGHT ON EARTH. This is not Sophie. This is Ginny (Emily Rudd). Ginny is going to Mars. Walt and Ginny carry on a verrrryyyy long-distance relationship that is also verrrrryyyy one-sided. It is unclear whether they were ever actually dating or if it was merely Walt who thought they were dating.

Sophie, meanwhile, is a rich girl Walt also encounters on Earth. She has a boyfriend named Calvin played by Cuba Gooding Jr.’s son who really has been making the teen dramedy rounds (Booksmart and Love, Victor) and, you know what, good for him, I like something about him. Calvin — who she has been with since EIGHTH GRADE, which is upsetting to me as someone who doesn’t even think you should have the same best friend you had in eighth grade — is on Mars. He’s one of those special smartypants who gets to be there because he knows all about terraforming (Google it! I’m not here to explain theoretical science unless the science is that everyone in space is gay!). Sophie has a LIFE PLAN, but it is being derailed by the fact that her boyfriend keeps extending his time on Mars. She also has a fear of flying, but she overcomes that fear to reunite with him. Walt uses her in order to stowaway on the spaceship and then has to pretend to be Calvin so that neither of them will get caught, even though the two do not like each other one bit!!!! Chemistry fizzles under the surface but like…barely.

Anyway, Walt and Sophie eventually end up together because Ginny is like wait it’s weird that you followed me to literal space after one night of knowing each other and one (1) kiss, and I think that’s fair. Sophie and Calvin break up, because they grow apart. Right at the very end, Moonshot contends with the fact that Sophie and Calvin are not the same people they were when they got together (again, in eighth grade, so they were so very young!). Sophie liked Calvin, because he fit her literal checklist for a perfect boyfriend, which feels very eighth grade! They’re adults now! With lives and goals outside of each other! Even though the emotional focus of a rom-com is usually on the union (so in this case Sophie/Walt) and not the end of another relationship (Sophie/Calvin), the breakup portion of Sophie’s narrative is genuinely good stuff that I wish were explored more! Instead it unfolds hastily and mechanically in the final act, and the thing about wrapping Sophie/Calvin that quickly is that it kinda doesn’t make Sophie/Walt work!

On that note, one of the most interesting aspects of Moonshot is that Sophie’s parents are dead and that she was, after the age of 16, raised by her boyfriend’s parents. (He was her boyfriend first, so there’s no Callie/Brandon on The Fosters ickiness to this.) Part of what kept Sophie with Calvin for so long was because she was so embedded in his family’s life. It’s hard to break up with someone who feels like family. If anything, this is actually the most queer part of Moonshot. I know lots of queer folks who are estranged from their own families who become very close with their partner’s families. Which can complicate a breakup. But Moonshot’s script only skims the surface here, drawing Sophie in bold strokes that Condor at least fashions into something more memorable. The movie occasionally comes so close to breaking the mold it stuffs its characters and story into like stowaways, but it never quite gets there.

Its commentary on capitalism feels somehow thin and overstated at the same time. Walt’s big realization that he’s being used by Leon Kovi and the company in the movie’s final act has all the bite of a worm. I don’t need my rom-coms to be deep, but so much of the humor of the movie relies on this skewering of SpaceX and similar efforts to colonize space, and it’s just very obvious and mechanical in a way that suggests no one making the movie is all that interested in skewering someone like Musk and what he represents but rather just using this as a quirky, timely backdrop.

The movie’s greatest strength — other than Captain Tarter — is Condor, whose range and sparkle make her an effervescent rom-com lead. Cole Sprouse is solid, too. The banter between Walt and Sophie aims for Beatrice/Benedick levels of wit and chemistry and tension, but the script ultimately falls short, instead making the fraughtness of their dynamic feel awkward. Sprouse and Condor elevate it with their performances, but it isn’t enough.

I suppose this will be confusing giving everything I’ve just written, but I didn’t hate Moonshot. It was fine! I guess I want more from space rom-coms. I’m fine with a queer couple that seems to only be around for brief bursts of comedic relief, but I do want a whisper of emotional stakes to their companionship. Sure I felt something about the queer couple — as in, I felt they shouldn’t be together! But the movie didn’t convey an awareness of that tension, so it doesn’t feel like intentional characterization. Celeste/Tabby just felt — like the whole space travel conceit — like set dressing meant to obscure the fact that this is just a pretty bland, pretty by-the-numbers rom-com. And a rom-com set in space simply shouldn’t feel this terrestrial.