There are some really great things on the internet and some really terrible things. Oftentimes, one of the nicer things is Craigslists’ Missed Connections. They’re not perfect; it’s hard to feel really inspired or reassured about the state of the world by “you were smiley and shoe shopping. want to hook up?” (That one is real!) But there are some gems, and there are some things that aren’t gems necessarily but are sweet and earnest and are a nice reminder that sometimes humans notice other humans in a nice way, in a way that says “I wish I knew more about you, girl with the broken strap on her messenger bag, but I didn’t want to bother you, so I’m writing about it instead, very unobtrusively.” It’s how you know that someone, somewhere, maybe really does notice your new haircut and your pretty smile and your sweet-ass sneakers.

But they can be very ephemeral, these missed connections! They age out and disappear, and the fact that someone going to see a Pink Floyd cover band noticed a cute girl looking sad and smoking a cigarette outside a Chipotle and wished they could ask her what was going on is gone forever. Until now, when an enterprising and admirable person named Sophie Blackall decided to put at least some of them into a book, with BEAUTIFUL illustrations. 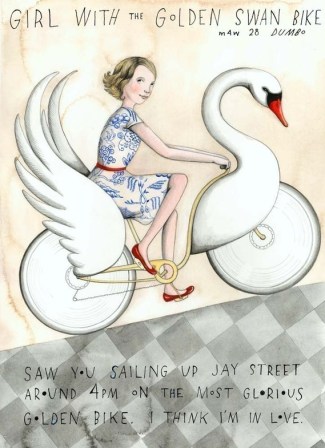 There are some romances — Cleopatra and Caesar, Romeo and Juliet, Bette and Tina — that are momentous enough to be immortalized throughout the ages in art and collective memory. For each of those there are thousands more that never actually come to pass. But there’s something kind of beautiful about those, too. Isn’t it time someone immortalized them?

Blackall’s book is ridiculously cheap on Amazon right now — I seriously feel like you would regret missing this one.