The fight for marriage equality has long seemed like an uphill battle that most of America didn’t even care we were fighting. It’s possible that for the most part, that’s still the case. But it’s becoming increasingly clear that we also have allies, and some of them in very high places. For instance, Freedom to Marry has assembled a coalition of 75 mayors across the country who have taken up a push for marriage equality which, while described as “largely symbolic,” is still an impressive number of voices from positions of power calling for our rights. Marc Solomon of Freedom to Marry explains that “mayors are the elected officials closest to the people, and they know what’s going on in their communities and they see that marriage strengthens communities,” which makes their support of the gay families in their communities arguably more meaningful, if not as politically powerful, as officials in more powerful positions. Important decisions about marriage equality will be made at the state or federal level, not by individual cities; in 2004, when San Francisco Mayor Gavin Newsom tried to call for same-sex marriages to be officiated in San Francisco, they were later declared void. But Freedom to Marry hopes that the mayors of America can help convince those politicians with more influence over the issue, and remind them that the politicians closest to the people are aware of the inequality they’re living with. 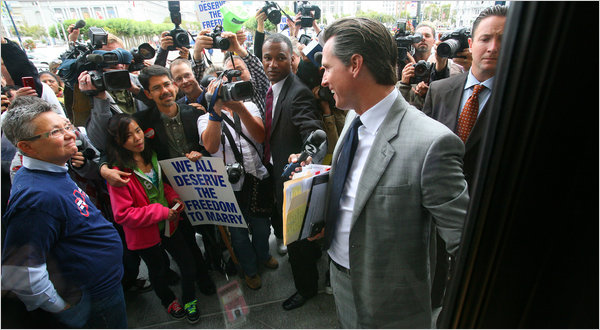 Corporations are also backing the gay marriage fight in increasing numbers; Google already stepped up to compensate its gay employees for the fact that the state of California doesn’t provide them with equal rights back in 2010, and now Microsoft is calling for gay marriage to be passed in Washington state, for the sake of being able to recruit gay employees at their Seattle headquarters. In fact, they’ve joined with five other companies — Vulcan, NIKE, RealNetworks, Group Health Cooperative, and Concur — to call for the passage of SB 6239 and HB 2516, which would legalize same-sex marriage. Microsoft hires some of the most talented and intelligent people in the world, and they say they’d like to continue to do so without their employees having to take into account whether their families can live safely and equally under the law. From Microsoft’s official blog:

As other states recognize marriage equality, Washington’s employers are at a disadvantage if we cannot offer a similar, inclusive environment to our talented employees, our top recruits and their families. Employers in the technology sector face an unprecedented national and global competition for top talent. Despite progress made in recent years with domestic partnership rights, same-sex couples in Washington still hold a different status from their neighbors. Marriage equality in Washington would put employers here on an equal footing with employers in the six other states that already recognize the committed relationships of same-sex couples – Connecticut, Iowa, Massachusetts, New Hampshire, New York and Vermont. This in turn will help us continue to compete for talent.

In America, it’s not so farfetched to think that corporate pressure can accomplish something that years of blood, sweat and tears from impassioned activists and the moral compass of the universe haven’t (although of course we wouldn’t be here having this conversation at all were it not for them). And lo, while there’s no way of knowing whether Microsoft’s influence is responsible, one more swing vote in Washington has now moved to our side. Jim Kastama voted against same-sex marriage in 1998, but now plans to vote for it, which means that the issue is only one vote shy of passing. Five voters are still undecided.

There’s currently six states in which same-sex marriage is legal, and 30 in which it’s outright banned. Winning this victory state by state is exhausting and sometimes feels impossible, but it’s happening. And it’s possible that a Supreme Court Case on Prop 8 could change the entire game. But for now, we can take comfort in the fact that we’re winning slowly but surely, and that between our commitment and the help of allies, there’s no way we can lose.