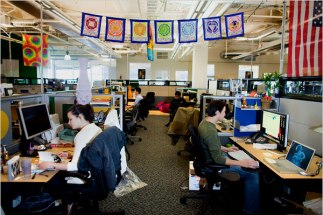 So have you heard the many exotic myths surrounding the Google offices and the experience of working for them? The five different floors of the cafeteria, all serving gourmet cuisine which you can have delivered to your office by a trained monkey? The electromagnetic levitation moonboots you are provided with to transport you to the meetings which have imported Italian espresso instead of coffee? The free skydiving? Well anyways,  add one more item to the list of Reasons Why Google Is the Perfect Employer: they’re going to start compensating gay and lesbian employees for the extra taxes they pay because they can’t legally marry their partners. (@nytimes)

According to Laszlo Bock, vice president of HR for Google, a gay employee personally pointed out the discrepancy in experience between GLBT and straight employees – employees with domestic partners will pay an average of $1,069 more per year than their straight married counterparts. (Boy howdy would it be nice if a court ruling overturned the law that prohibits gay people from marrying and thus getting equal tax treatment! Just saying!) And according to Google, they just kind of thought about it, and… decided this was unfair and someone should fix it. What a novel idea! So starting today, Google will compensate gay and lesbian employees the amount of money that the law is denying them in benefits, retroactively to Jan. 1 of this year.

Aside from being objectively awesome in and of itself, this story highlights a few things.

First of all, it gets down to what is for a lot of us the real experience of being queer in the US – although social issues and the general perception of our community in the mainstream media are certainly important, for many the real day-to-day reality of being part of a marginalized group is economic. We make less money. We’re hired for fewer jobs. We’re often the first to be fired or laid off from the jobs we do get. And then we’re forced to pay higher taxes because of the way our government regulates our families. The moral and ethical ramifications of discrimination are clear, but speaking as professional writers and journalists who still eat like college freshmen because it’s all we can afford, we’d almost be willing to put up with the social degradation and feeling of being second-class if we could at least make enough money to feed our rent. Google’s move addresses a real need of the queer community – to be treated as a first-class citizen by their employers, and have someone take the wage gap seriously.

And speaking of taking things seriously, let’s look at the big picture here. There are about 700 gay or lesbian employees at Google according to the New York Times – in a literal sense, they’re the only one who’s going to be impacted by this policy. Queer women working as Walgreens cashiers in Michigan won’t directly benefit. Nor will the lesbians who are still out of work, as addressed in Curve Magazine’s The Silent Majority: Lesbians and Poverty, in which Victoria A. Brownworth writes:

The recession has meant more people are living on the edge financially and for women, that means poverty looms. For lesbians who are already marginalized by society, that edge is exceedingly sharp and disallows for anything to go wrong. Lesbians often have few support systems, or, like Nelson, their supports aren’t a buffer because those people too are experiencing the same dire circumstances.

But I would say the example that Google is setting here is enormously important in a time and place when “change” is simultaneously the buzzword of the decade and the biggest political boogeyman of the year.

Google “has decided it’s in their best interest to treat employees with same-sex partners fairly,” said Daryl Herrschaft, who oversees the Workplace Project of the Human Rights Campaign Foundation, “and that includes picking up the slack when federal law doesn’t recognize the diversity of today’s work force.”

Do you see what happened here? It was so mindblowing to me I almost couldn’t process it. Google looked at the situation, decided it was unfair, and just up and did something about it. In the middle of a seemingly interminable DADT repeal, in the middle of a series of endless incremental decisions to maybe sort of kind of one day decide on the constitutionality of DOMA, in the middle of a dozen petty legal battles across a dozen states to make sure queers can’t marry or adopt or work or use the bathroom they need to, someone just realized something was wrong, and since it was in their power to fix it, they did. It’s such a simple, beautiful thing it brings tears to your eyes. Google’s example is an incredible one, and one that we should all drop to our knees and pray that others will follow: they used their money and social capital to help a group that didn’t have the power to help itself, they chose to correct a wrong that the government is too clumsy and backwards to do for itself.

And most important of all, they did it because they knew it was “in their best interest to treat employees with same-sex partners fairly.” That’s what will end up being the key to all of this, to the future that’s to bright we’ll all need sunglasses: making the people in charge realize that they should give us equal rights not just because it’s fair or because we deserve them, but because it’s best of all of us; the best thing for America is for all of its citizens to be treated like full citizens, even the gay ones. The health and benefits department of the consulting firm Mercer has said that “It could have a ripple effect, prompting other employers, and particularly employers in the same industry, to take a look at their own benefits package and see whether it would be appropriate to extend those benefits;” I think we should all be crossing our fingers that they’re right.

[It’s possible also that Google is Big Brother and possibly harvesting our thoughts for future world takeover. But maybe that’s the only way to get our freakin’ money.]