If you think about it, you’ve probably made a shrine in your lifetime or have one in your living space right now. Remember when you put up posters and pictures of your favorite musicians, actors, athletes, or someone super awesome you admired on your bedroom walls growing up? (Maybe you still do this, which is cool.) I’d say those walls are similar to a shrine by definition — a sacred place or niche dedicated to a revered hero, saint, deity, etc. I would also argue that people create virtual shrines all the time when they devote an entire Tumblr to a specific person, like Beyoncé or Jennifer Lawrence.

Shrines can be found in numerous religions and cultures around the world so obviously, for some people, shrines are holy and not to be taken lightly. I grew up Catholic so it was normal for people to have a shrine devoted to a particular saint that could help intercede their specific prayers. Even though my family doesn’t celebrate Dia de Los Muertos or Day of the Dead, I’ve been to community celebrations to honor this Mexican tradition. People usually make altars (which are similar to shrines) for their dead beloved ones, which they decorate with flowers, papel picado, calaveras and lay out their loved ones’ favorite foods and drinks. 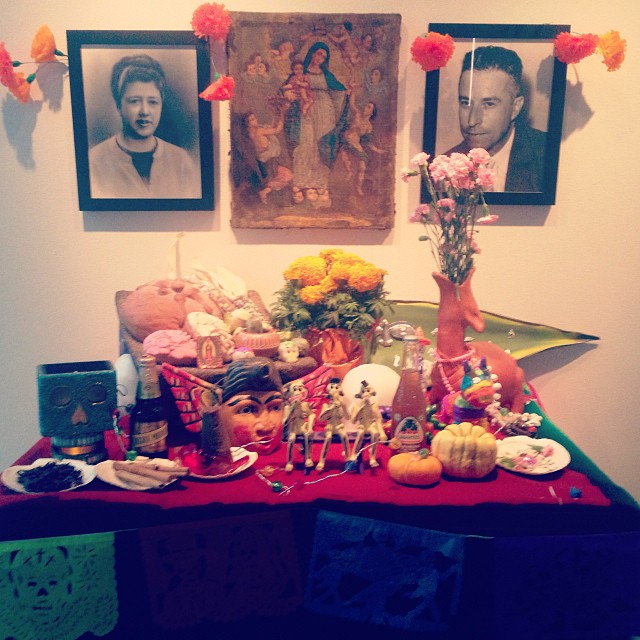 One of the many altars I saw at a Dia De Los Muertos celebration in Dallas.

Whether they are tied to a sacred religious or cultural practice or not, shrines are meaningful, symbolic and powerful. A few others and I led a workshop called Chingona Chats and Crafts: Sacred Queer Heart Shrines at A-Camp where we made mini shrines out of Altoids tins and talked about our varied, colorful experiences as queer Latin@s. For queer women of color, sometimes it’s hard to keep your head up in a world that denies you a living wage, upward mobility, safety, workplace protections, healthcare, your identity etc. I wanted to create these mini shrines devoted to the badass bitches, feminists, queers and women of color, who’ve paved the way for us, so that we can be inspired and empowered by them everyday. I want them to serve as reminders that we are worthy, we matter, we deserve better, we have the power to change things and we can do great things in this world.

You didn’t throw away your empty Altoids tin because it is so cute and miniature. Great! You’re going to use it to make this mini shrine. If you have an empty matchbox that’ll work too. You can make this as simple or elaborate as you want so you can pick and choose which materials to use. Let’s get crafty, chic@! 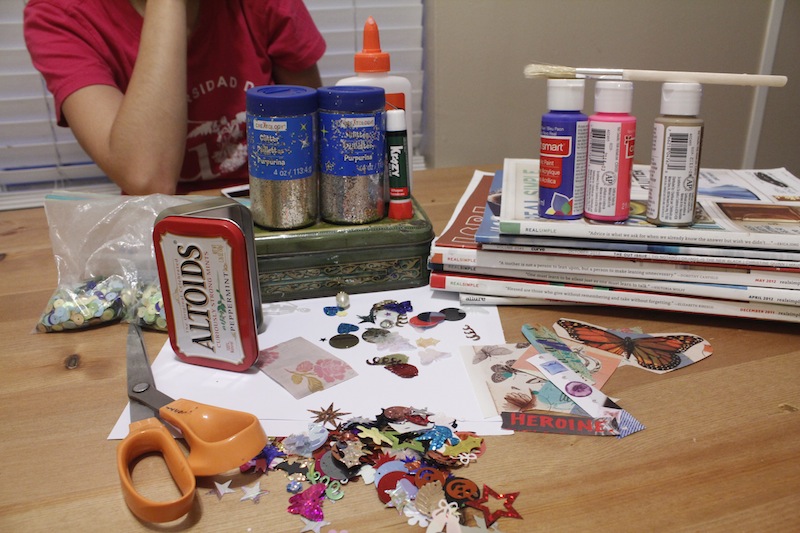 Did y’all ever watch the Cesar Chavez movie? Well I did and I thought it was pretty amazing, except I wanted MOAR Dolores Huerta. (She was portrayed by Rosario Dawson who I still think was wrong for the part.)

Dolores Huerta, labor leader and civil rights activist, cofounded the National Farmworkers Association with Cesar Chavez, which later became the United Farm Workers. She is most noted for helping direct UFW’s efforts in the Delano grape strike which lasted more than five years and led to a significant victory for UFW. 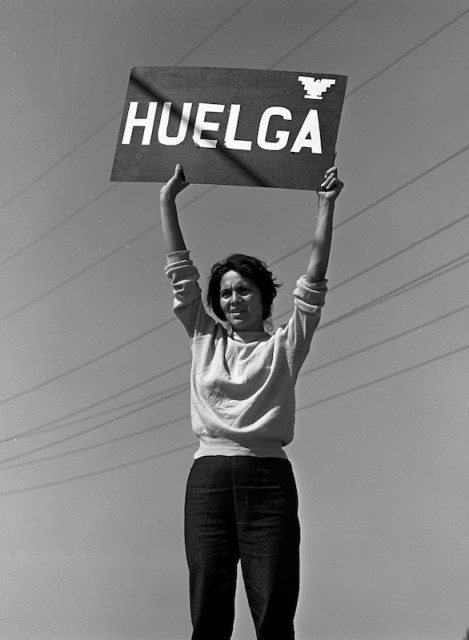 My maternal and paternal grandparents, aunts, uncles and parents were all migrant farm workers for some time in their lives so the effort that Dolores rallied behind is very dear to my heart. At 84, Huerta is still a steadfast activist and advocate for social justice, including LGBT causes. So you see, of course she’s a badass that deserves a shrine. You should pick someone just as special to you. 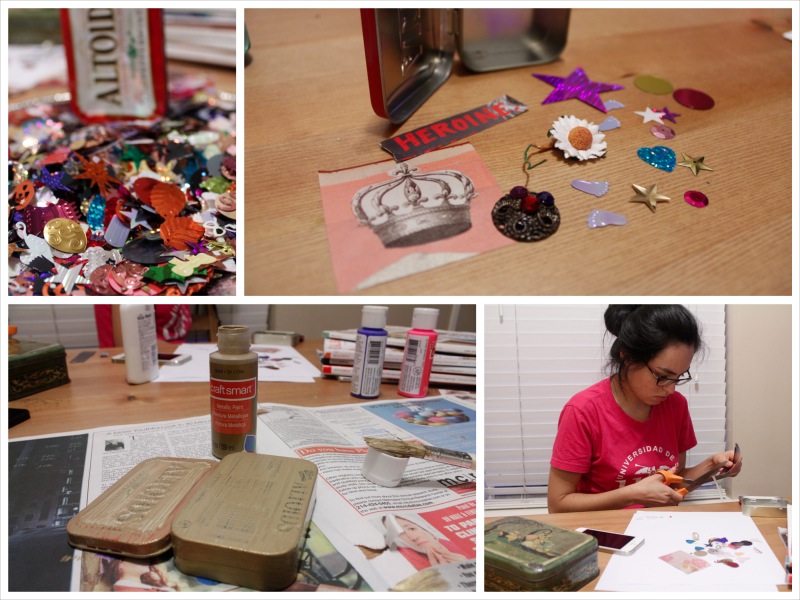 You can choose to use anything and everything to decorate your shrine.

Paint the outside of your tin. I used acrylic paint and a wide brush which made it hard to paint the crevices of the tin, making the outside look kinda crappy. It’s ok, I just wanted to cover up the Altoids label. Spray paint is the faster, better option. 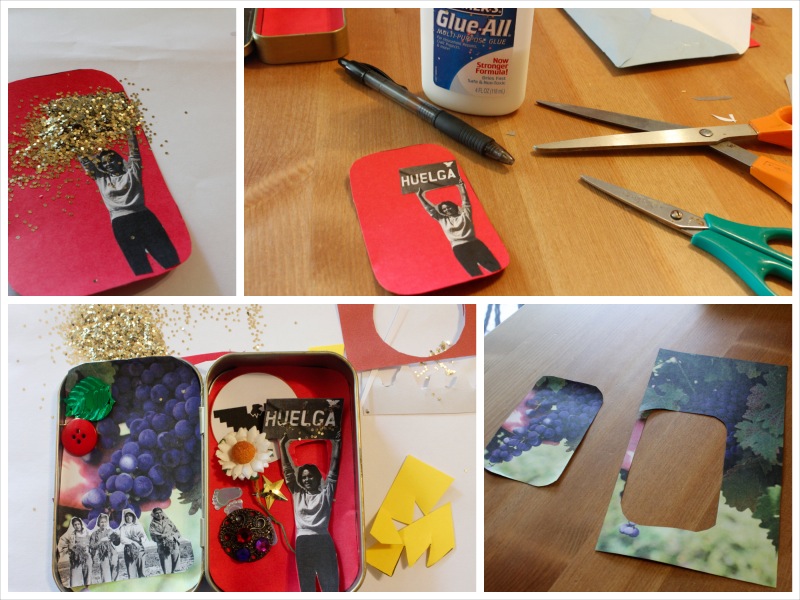 While you’re waiting for the paint to dry or after it dries, figure out the layout of your shrine. I themed my shrine around Huerta’s work with UFW and the Delano grape strike. I found a picture of grapes in a food magazine and chose red card stock to represent UFW’s flag color and cut them to the size of the tin to serve as a backdrops for each side.

At this point, I didn’t have a plan of how it was going to look. I just kinda put things in the tin and figured out how I wanted it to look without gluing anything down. It helps having a printer handy to add relevant photos. For example, I knew I definitely wanted to add UFW’s logo so I printed it to size and found a picture of women farm workers. I also added some pizzazz with glitter and sequins. I added tiny sequin feet to represent the 300 miles UFW protesters walked in 1966 to pressure growers and the state government to meet the demands of farm workers. 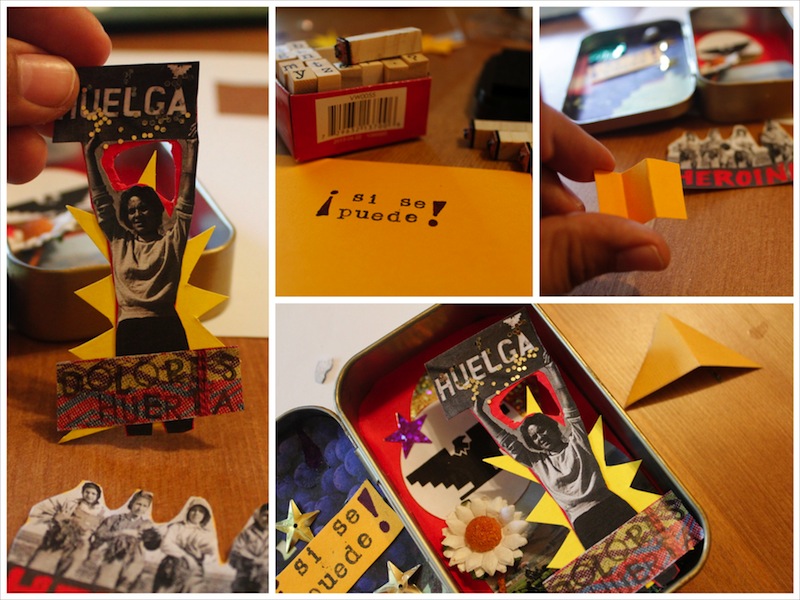 Once I figured out the layout, I started gluing things down, starting from the bottom and working my way up. I added more details to the shrine by adding the words “Si Se Puede!” using tiny letter stamps. I pasted Huerta’s figure on some card stock and cut her out and added more color and depth with the yellow kapow! shape behind her. I wanted Huerta’s outline to be 3D in the shrine, so I cut a short strip of card stock and folded it like an accordion and pasted one end to the figure and the other to the shrine. I used super glue for heavier things like buttons and trinkets.

Once everything is glued and dried, stand it up and be inspired by the kickass person in your mini shrine. 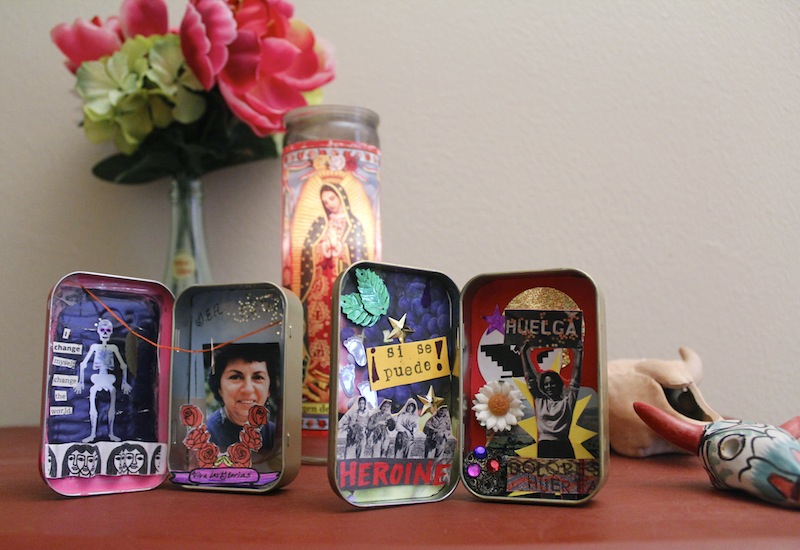 My girlfriend made the shrine on the left for Gloria Anzaldúa and it is so perfect, like her.

Before you go! It takes funding to keep this publication by and for queer women and trans people of all genders running every day. And A+ members keep the majority of our site free for everyone. Still, 99.9% of our readers are not members. A+ membership starts at just $4/month. If you're able to, will you join A+ and keep Autostraddle here and working for everyone?
Join A+
Related:camp autostraddlewomen of color