Lupe Valdez is a trailblazer. When she was first elected Dallas County Sheriff in 2004, she defied the odds and became the nation’s first Latina lesbian sheriff, and also the first Democrat to take the post in over 20 years at the time. When she won the Democratic gubernatorial nomination in Texas, she became the first Latina and first openly gay person nominated by a major party for governor. Now Valdez is going up against well-funded Republican incumbent Greg Abbott in next week’s general election; to many, it seems unlikely she’ll win. 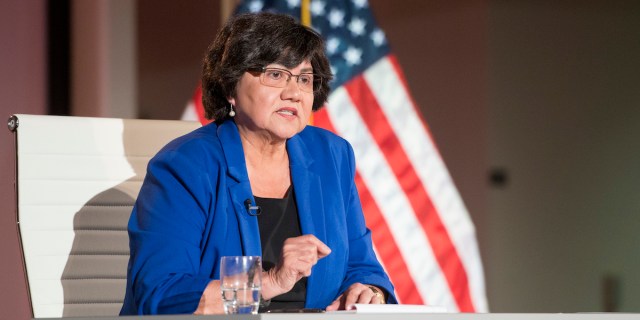 The 71-year-old has prided herself on being a hard worker from a humble background and being a champion for the people. But her lackluster campaign and her less than perfect record as sheriff has dampened Texans’ enthusiasm for her as a candidate, including this queer Tejana. Her record for breaking glass ceilings has helped put her name on the map, but her identities can only take her so far. What does she actually stand for as a candidate? What can she do for Texas? What has she done in the past that indicates she’s right for the job?

Let’s take a look at Valdez’s past, her record as sheriff and what she hopes to stand for as governor.

Valdez comes from a family of poor, migrant farm workers who followed the crops each season for work. As the youngest child in a family of ten, Valdez was able to attend school in San Antonio while many of her older brothers and sisters dropped out of school in order to support the family. According to her campaign ad, she had to walk unpaved sidewalks and dirt roads and take a city bus across town to get a better education. When she graduated high school, she worked two to three jobs to put herself through college where she earned a bachelor’s degree in business administration from Southern Nazarene University.

After joining the military and becoming a captain in the U.S. Army, Valdez became a federal agent with U.S. Customs and Border Protection and the Department of Homeland Security, focusing on fraud and drug cases for almost 30 years. While working as a federal agent, she completed her Master’s in Criminology from UT-Arlington. Shortly after, she was elected as Dallas County Sheriff, where she served from 2005-2017.

When Valdez began her career in law enforcement, her father was extremely disappointed with her decision, saying she was “turning [her] back on [her] people.” He and his sons had experienced police brutality, and were afraid she would be just like those police officers. Valdez has prided herself in “not being like the rest of them” and aimed to reform the “good ol’ boy system” as sheriff. In her 2016 DNC speech, she said, “We put on our badge every day to serve and protect, not to hate and discriminate,” and on her campaign website she said she treated individuals in the criminal justice system with “respect and dignity.” But these seem like lofty goals in an already fundamentally unjust system towards anyone who isn’t rich and white; was she able to pull it off?

When Valdez took on her role as sheriff in 2005, she inherited a massive county jail riddled with problems. In addition to having a department with a history of cronyism and corruption, the county jail (which houses up to 7,100 inmates) was overcrowded and understaffed. These complications led to failing to properly screen inmates for health problems and a lawsuit from the families of three mentally ill inmates over their treatment and denial of medication while in jail. She had a lot on her hands when she entered office, to say the least.

Still, nearly two years after she became sheriff, the Texas Observer reports “the U.S. Justice Department investigated the jail and concluded that officials still regularly violated the rights of inmates.” The report mentioned that at least 11 inmate deaths were preventable; it described unprepared guards who weren’t trained to deal with suicidal inmates and had trouble recalling emergency procedures for the jail. The Justice Department went on to sue the county in 2007 and eventually they reached a settlement that required building a new jail infirmary. They also required inspection of Valdez’s detention centers every six months — which Valdez’s department continuously failed until 2010.

Then in 2015, Valdez’s deputies were accused of killing Joseph Hutcheson, an unarmed man who walked into the lobby of the county jail high, confused and begging for help. Officers subdued him on the ground where his heart eventually stopped. His death was ruled a homicide. When police accountability activists and Hutcheson’s family tried to organize a vigil in the lobby, Valdez sent deputies in riot gear to disperse the crowd. In addition, Valdez prolonged the release of the video of Hutcheson’s death and then later fought to keep records in the case from being publicly disclosed. In 2017, a jury cleared the deputies involved of any wrongdoing. But in the same year, Hutcheson’s family filed a lawsuit that claims the sheriff’s department staff waited seven minutes to start CPR after his heart stopped.

Then there’s Valdez’s cooperation with ICE. Valdez allowed immigration holds at the county jail of people being processed for (usually minor) criminal offenses; after the processing of their criminal charges, they were held for up to an additional 48 hours for ICE and possible deportation. In the 2015 fiscal year, there were about 2,048 holds, or about 170 a month.

It came back to haunt her earlier this year during a town hall hosted by Jolt, a Latinx civic engagement organization aimed at young Latinx voters in Texas. Valdez hadn’t yet won the Democratic nomination and was heading towards a runoff election against Andrew White, the son of former Governor Mark White. A student member asked Valdez about her “anti-immigrant” track record as sheriff and Jolt wasn’t satisfied with her answer so they ended up endorsing White.

“Ms. Valdez, you were the sheriff of Dallas County for many years, and it seems that your legacy was one of supporting anti-immigrant policies that actually expanded ICE enforcement. Given that, one, the Dallas community walked out of your forum with ICE saying that you turned your backs on them; two, you complied with every ICE request for warrantless ICE detentions even when other counties, like Travis County, were taking a courageous stand against them, and three, you opened the county’s facility doors to ICE and even entered a bed-renting arrangement. Why should we trust you today?…Will you take a stand against unconstitutional ICE holds and jail deportation?”

“Of course, look at me, I’m going to fight for as much immigration as I can,” Valdez responded, “but immigration is a federal issue and there are certain things that we have to do. Unfortunately what she was discussing were several things that were quite misunderstood.”

Valdez went on to say she supports comprehensive immigration reform, a pathway to citizenship for Dreamers and reminded everyone that she testified against SB4, a sanctuary city ban, multiple times.

“It’s Not Enough Just to Have Representation”

If there’s a state that could use a Latinx governor, it’s Texas, with the Hispanic population projected to be the largest population demographic by 2022. In addition, the growing Hispanic population is very young and is projected to be the largest voting bloc in Texas within the next decade. Young Latinx people are the future of Texas and yet we haven’t been present at the polls in the past. Many Democrats hope Lupe Valdez can mobilize Latinx non-voters to go to the polls and at least help Democratic candidates win in other tight races. But Tess Ortega, a queer Latina and lead organizer with Jolt, says it’s gonna take more for a candidate to gain Latinxs’ vote.

“I believe that it’s not enough just to have representation, but we also need someone who’s really going to bat for our community and put them first and that means all people in the community,” she told me.

Ortega and her team have been busy registering young Latinxs to vote and ensuring they go vote with pledge cards and text reminders. After Valdez won the runoff election and White lost, Jolt endorsed her for governor. Ortega tells me that the organization decided it was best not to sit out of an election even if they don’t totally agree with a particular candidate and that’s the case with Valdez.

“I thought I’d never see the day when there was a candidate running as a Latina lesbian in the state of Texas, it just wasn’t something I thought would happen,” Ortega said. “I think that’s awesome that we’ve gotten to a place where she can win the Democratic nomination, but outside of that, I’m not super stoked with some of the ways she operated when she was sheriff for Dallas county, in particular the immigration policies that were enacted there and the coordination with ICE.”

But at the end of the day Ortega supports her because she’d rather vote and make her voice heard. Ortega also recognizes that Valdez would champion LGBT issues and protect reproductive rights, two areas the Texas legislature has taken a hit at in the past few sessions with an anti-trans bathroom bill and anti-choice bills.

“I think that there’s room to push [Valdez] on things and you can say that about a lot of politicians,” Ortega said. “We’re not gonna agree on everything they do and they stand for. It’s our job as the voters, who they’re supposed to represent, it’s up to us to hold them accountable.”

What It Takes To Win

Voter turnout might be the key to winning an election but that power comes from one thing — money, and who has the most of it. And unfortunately for Valdez, she’s got loose change compared to Abbott’s abundant funds: $222,000 in cash compared to the nearly $29 million in the bank, in fact. It reflects in the projected polls. Nate Silver’s FiveThirtyEight gubernatorial forecasts predicts Valdez has a 0.4 percent chance of beating Abbott. Instead, many Texans have their eyes set on the Senate race between Ted Cruz and Beto O’Rourke, where Democrats have an actual goddamn chance.

Journalist Christopher Hooks at the Texas Observer articulates well what the first and only debate between Abbott and Valdez was like — there was a lot of pretending.

“None of this is to say Valdez had a great debate. She did fine, but it doesn’t matter: She still has no hope of winning. Some Democrats pretend she’s a contender, but almost none have offered her material support. It’s a phony race. Yet in a state that champions strong-willed politicians, Abbott is the least substantial governor in decades.”

Valdez is certainly an underdog and always has been her entire career. But she still persists and fights for a more progressive Texas, against all odds. For what it’s worth, that is inspiring.