Boom! Box’s new title Lumberjanes is back with issue #2, and it picks up the fun, adventure and friendship of the last issue right off the ground and runs with it even faster and farther. Created by Shannon Waters, Grace Ellis (also known as our very own Intern Grace) and Noelle Stevenson, and with illustrations by Brooke Allen and colors by Maarta Laiho, Lumberjanes is only two issues in but is, in my opinion, already quickly on it’s way to becoming the Mary Poppins of comics (practically perfect in every way).

We open with all the girls getting ready to canoe down the river. Jen is giving them all instructions, trying to make sure they stay safe on the water. However, two of the girls, Ripley and Mal, keep on asking about what kind of dangerous creatures might be lurking under the waves. Ripley’s asking because she wants to see a whale or a shark, Mal is asking because she’s deathly afraid of running into a River Monster. 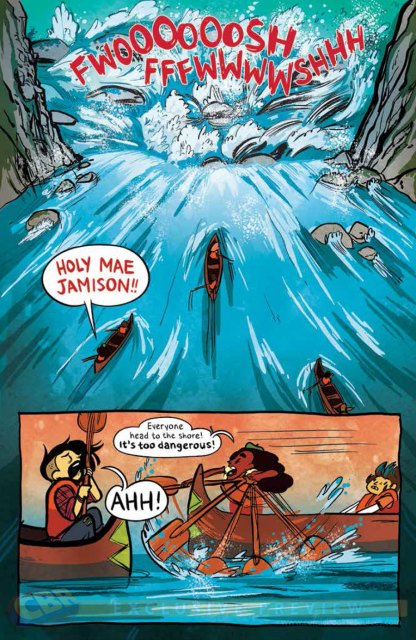 A nice, calming trip down the river suddenly turns into a trip down deadly rapids. Jo and April (especially April) go right into the current, followed by Mal and Molly, who are just trying to save their pals. Jen and Ripley are heading safely to shore, but then Ripley dives out of the canoe and straight into the river. Molly’s able to pull her into their canoe, but not before a river monster rears its ugly head and knocks the already-scared-of-rivers Mal out of the boat.
Then there’s the big moment we’ve all been waiting for. Mal is lying on the shore, not breathing. Molly is freaking out, asking what to do. April and Jo are in the background, tell in her that she needs to perform CPR and that CPR involves “smooching.” Molly leans in and plants on right on her lips. However, the moment is short lived as Ripley comes soaring in from off page with a flying double kick right to Mal’s gut, causing water to come shooting out her mouth. But Mal knows who really saved her, turning to Molly to give her thanks. And the way April and Jo are smugly smiling in the background, you can tell they’ve been waiting a long time to have an excuse to get these two to kiss. Don’t worry, there’s definitely the required amount of blushing and awkward “Uh”s.
I am so in love with this comic. Recently my two favorite comics, FF by Matt Fraction and Mike Allred and Young Avengers by Kieron Gillen and Jamie McKelvie, both ended their runs, and I didn’t think that the hole they left would be filled so quickly. I’m so thankful that I live in a time when a comic like this can exist; a comic starring a team of young women, created by a team of young women.

We also see the forest continue building a mystery. The girls are attacked by a giant river monster, which is weird enough, but then when they notice it has three eyes, just like the weird foxes they saw the other night in issue #1. Then, when Ripley’s chocolate bar is stolen by an eagle, Ripley sees that it also has a mysterious third eye. It all is building up to the last page of the issue whee the girls discover something really amazing, so amazing, in fact, that it causes Jo to remark, “Okay, so there’s just like, NO chance of us having a normal summer, is there?”
Once again, the references are sharp as a sea serpent’s teeth. You’ve got everything from to Jeremy Wade’s Discovery Channel show to Mae Jemison, the first African-American woman in space. And the jokes! If you love puns about merit badges, visual jokes about life vests, or basically anything Ripley does, Lumberjanes has got you covered. Every single panel is fun to read and look at.
There are a few more things that I love about this issue. I feel like the art and coloring really shine. The blues and greens and wavy lines make for one wild river ride.  Again there’s the playlist for a mix cd  in the back, this time put together by Mal. Also in this issue we get to see more of Jen, the cabin leader who has to put up with these all girls’ hijinks, but still seems like a cool person. April gets to be totally badass, which is nice seeing as she seems like the most traditionally “girly” one, and we don’t see it played off as a joke. Instead of “look at this girly-girl kicking butt, how funny and unexpected!” It seems more like it’s just a part of her character. 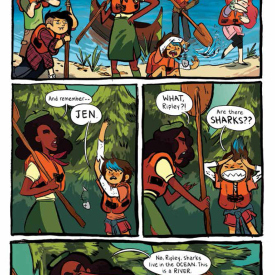 Lumberjanes was just picked up to be a recurring series, which is absolutely outstanding news. It was originally slated to be an eight issue limited run, but thanks to issue #1 selling out three times and good initial sales of this issue, plus all the buzz the series is earning online, Boom! Box decided to keep it going. However, just because of this great news, don’t stop buying the comic. As usual, it’s available at most comic book shops (especially if you preorder it, which is super important to do).
Also, at our very own A-Camp this week, two of the comic’s creators (Intern Grace and Shannon Waters) will be leading a workshop on how to make your very own comics as well as talking about how Lumberjanes came to be.
There’s one last thing I’d like to do: introduce you to a new part of Drawn to Comics starting this week where I’ll be letting you know about comic releases and news that I think might be of interest to Autostraddle fans. 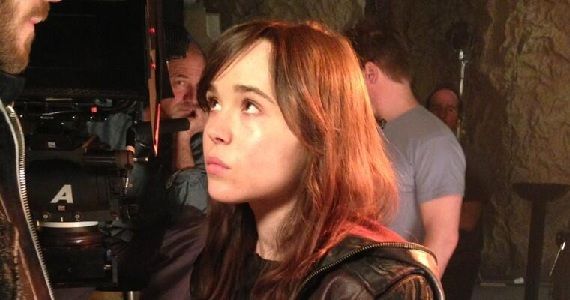 May 23: X-Men Days of Future Past, starring Ellen Page and Jennifer Lawrence comes out in theaters.