Love, Victor has been my early summer not-guilty pleasure (but also?) for the last three years — so imagine my DELIGHT when last summer’s Season Two cliffhanger ended with perpetual high school popular girl Lake sneaking champagne at her bestie’s dad’s wedding and making eyes with Lucy, cater waiter and ex-girlfriend of the school’s biggest jock, Andrew. It’s less than a breath, all sharp inhale and stomach butterflies, in the ways of the best classic teen romances, and suddenly Lake’s entire world has shifted on its axis.

Love, Victor’s third and final season dropped today on Hulu, and it picks up directly where Season Two left us — with Lucy and Lake, still champagne giggly the night of Mia’s dad’s wedding, now sneaking off into a neighbor’s For Sale house to finish their stolen bottle and tip their toes into the pool. They sit shoulder-to-shoulder, sideways glances and smiles. It’s sweet and fun and idyllic. A perfectly bubbly teen romance that’s hopped up on its own happiness. Instead of wasting time on Lake’s coming out, by the start of the second episode all of that business has been taken care of efficiently. Lucy and Lake return to school arm-in-arm with little more than a raised eyebrow and plenty of hugs from Lake’s friends. 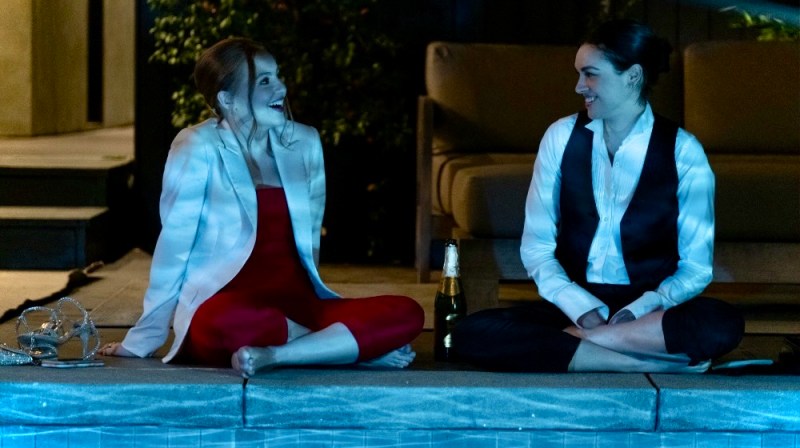 That’s what must struck me about Love, Victor’s final bow — how absolutely free of drama it is. Don’t get me wrong, Love, Victor has always led with its sweetness! Even when grappling with serious themes (one of Victor’s love interests has had an alcohol addiction, this season another gay character is almost involved in a hate crime, a different member of their friendship circle has a mom who struggles with clinical depression) the angst level never moves much beyond “way harsh Disney Channel.” One morning, Lake tells Mia that the night before she stayed up until two a.m. “talking and drinking root beer floats,” and Mia responds “Giving the Euphoria kids a run for their money.”

Love, Victor is aware of its lane and it’s pleasantly happy to stay on cruise control for its last set of episodes.

That might sound like I’m being sarcastic, but “approachable high school fairy tale” is a vibe, and they’re right to ride it. Love, Victor doesn’t have the dry bite of Hulu’s most recent queer high school rom-rom Crush or the sexually explicit humor of Hulu’s queer adult rom-com Fire Island — but how much do I love that one streaming network has three queer rom-coms released within mere weeks of each other that I can even make that comparison? Love, Victor is the To All The Boys I’ve Loved Before of Hulu’s gay rom-com empire, full of soft feelings and Instagram worthy camera filters. And you know what? Good for them! To All The Boys I’ve Loved Before took the genre and created Valentine’s Day trilogy supremacy.

There’s a special kind of magic when you can eat strawberry ice cream directly out of a pint on a 90 degree day (thanks global warming) and watch happy gay teens, knowing that nothing bad will happen to them. I may or may not always agree with Victor’s choices (the other big cliffhanger from last summer is which boy he’ll eventually choose to be with, his first love Benji or his new friend — turned potentially more — Rahim), but I never really worry about him. Victor’s mother (Ana Ortiz, the reason I started watching the show, and worth it every time) may have struggled between her Catholicism and her son’s sexuality, but I knew she’d never leave him in jeopardy. Rahim’s mother chides him not praying enough, but promises that Allah will bring him a boy one day because “so it is written.” Teens sneak into drag clubs and the most popular girl in school kisses her girlfriend in the hallway. Even the side gay characters find love before Season Three ends. Disney might as well have stitched “And they lived happily ever after” in swoopy gold cursive held up by chirping blue jays in front of the closing credits.

Let the gay Latine kid find love in his very religious family, let his mother be an imperfect model. Let the femme Muslim boy paint his nails and be an honor roll math whiz. Let the pan girl come out with her hot “Twilight era Kristen Stewart, but capable of smiling” girlfriend. Love, Victor excels at having multi-layered, nuanced conversations about adolescence and queerness without hardening its chest. And even though they make it look easy, it almost certainly never is. I’m glad for its victory lap.