When the trailer for Fire Island first dropped, the first person I texted was my best friend Elliott. We joked about our own gay summers, we cheered over a Peppermint cameo (she’s one of our favorite drag performers). He said writer/producer/star Joel Kim Booster was hot (and he is). I called Booster’s co-star and SNL regular Bowen Yang “King Bowen” (I stand by it). Then we went on about our days. When I watched Fire Island last weekend, I texted him again and said “I feel so complicated! Let me know when you watch!” Ugh, then I watched it again? Then before I knew it I watched it a third time? I think I might have a problem.

This isn’t about me and my questionable decisions in background noise movies. But it is about me and Elliott. Or rather it is about queer friendships. Or rather, even more specifically the friendships between gay women and men of color. I don’t mean to drag us someplace serious immediately, especially over what’s a remarkably fun and surprisingly smart (for being mindless in that ideal summer way) gay rom-com.

In a play on Jane Austen’s Pride and Prejudice, Noah (Booster), who’s also Fire Island’s narrator, spends one week every summer with Howie (Yang) and their best friends-turned-family at the seminal — at this point, boarding on gay myth making — Fire Island, long ago claimed by white, rich, body built, gay men as thee vacation spot to see and be seen. Noah, Howie, and their crew are… not these things.

In a purposeful ripping of one of the most famous love stories about the Haves and Have Nots, rom-com chaos unfolds almost exactly how you’d expect. It’s charming enough, and the chemistry of its nuanced friendship dynamics sell Fire Island when the script fails them, but what I mean when I say Booster wrote a smart take on a mindless set up is that I’ve never seen a film take on the relatively common and flagrantly cruel catchphrase from gay men’s dating apps — “No fats, no fems, no Asians” — so squarely. Noah and Howie in particular feel the brunt of that outcast (though I would’ve loved to see more from Torian Miller’s Max, who’s fat, Black, and femme, in this moment as well) and their respective coping with those burdens is visceral. I’m not the person you should read on that, so if you’re going to read only one piece about Fire Island, I’m begging you, it should be E. Alex Jung for Vulture.

Really I am here to talk about Margaret Cho as Erin, the mama bear of this found family, “career brunch server, age unknown, lesbian scam queen.” She’s based on Mrs. Bennet, for anyone following with Pride and Prejudice still ringing in their ears. The one with a little tattoo above her vagina that says “all-you-can-eat salad.” Five years ago, Erin ate a piece of glass left in her meal at a famous Italian chain, and she used her court winnings to buy property on Fire Island. She invites her boys there once a summer, the catalyst for the entire film. 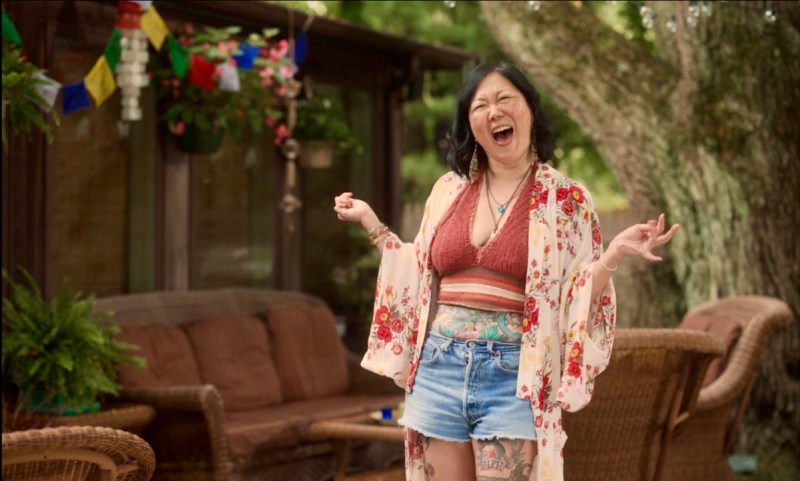 I mean what is there to say about Maragaret Cho? In the film, Noah’s ringtone is Wendy Williams saying “She’s an Icon. She’s a Legend.” And, yeah, that about sums it up. Having Margaret Cho — 30 years into her comedy career, a true groundbreaker in both queer and Asian entertainment — bless the screen in this already historic queer Asian-led project is just a chef’s kiss.

In Fire Island, Cho makes everything around her better by mostly playing herself — brassy, nurturing, covered in tats and feeling like home. At one point we find out that the man Howie’s into is gasp! a doctor! and Erin’s high pitched scream (in public!) was so good that I rewound it twice. She loves dinner parties, lounging in flowy robes, knit crop tops, staying home in Korean face masks while her boys go out dancing, and I never once saw her in a bra. She’s perfect.

Of course I would’ve loved to see more of her, but I’d say that about nearly every project Margaret Cho is in. Erin’s a role player in this queer family. And that’s fine, it’s not meant to be her film. But Fire Island manages to get a few genuinely good lesbian jokes in there — the wifi password for Erin’s house is “Cherry Jones, except all the e’s are 3’s” (an excellent play on both Cherry Jones, the incredibly talented, award-winning actress I best know for once dating Sarah Paulson, please don’t judge me, and also Cherry Grove, the section of Fire Island known as a lesbian hideaway). Erin gives excellent advice with the kind of weary tone that anyone’s been called a “queer elder” at 35 will immediately relate to. This is Joel Kim Booster and Bowen Yang’s movie — but of the smaller parts, Cho is expectedly a standout.

In a viral tweet that’s since been deleted (and apologized for), New York Magazine’s Hanna Rosin complained that Fire Island “gets an F- on the Bechdel test in a whole new way. Do we just ignore the drab lesbian stereotypes bc cute gay Asian boys? Is this revenge for all those years of the gay boy best friend?”

Rosin apologized, so I’m not going to go there, other than to say: First of all, Drab??? Margaret Cho was extremely hot in that uniquely queer woman over 50 way, and you all know exactly what I’m talking about. But also second, I hope it was a lesson for a lot of other critics about when it’s best to listen before speaking — the Bechdel test, whether or not two women characters share a screen without men and without talking about men, has always been dangerously limited when implemented carte blanche, especially when talking about people of color (even though it is tragic how few movies fail to meet the base standard, 37 years after Alison Bechdel first created it in 1985’s Dykes to Watch Out For). Bechdel herself said that Fire Island, one of the few major studio gay romantic comedies, and the first with a majority Asian cast, warranted an exception. But mostly, I think Rosin’s tweet stayed with me because it’s an arbitrary and unfair misread on how queer families work or find each other.

The way I found my queer family is about as random happenstance as Fire Island’s family found each other, or as much as any of our families have found each other, really. Noah met everyone working the same hellish bottomless brunch shift in Williamsburg when they were all young, queer, and even broker than they are now — living off of tips and quote “predatory student loans.” I met my queer family because at 22 I went to grad school (also broke) with Elliott, who adopted me almost right away — probably because we were both Black and gay. At some point he invited me to dinner with his friends from college. We spent the night loudly debating Whitney Houston and enough drinking champagne at this small Brazilian restaurant near campus that my only memories can be described as “warm,” “gold,” and “bubbly.” That was roughly 13 years ago, and the rest is our history.

Its script has flaws, and I’d argue that mapping onto Jane Austen’s characters and plot ultimately limits it — I think Fire Island would have worked better as a friendship comedy than a rom-com — but I loved Fire Island because it was real. It’s real to be erased and undesirable in white queer spaces as a fat person of color. It’s real to be gay and thirst after Christine Baranski or laugh until your sides hurt over Marissa Tomei. It’s real to want to escape for seven days and never once see a straight person.

More than anything, there was a single image in Fire Island that I just couldn’t shake. 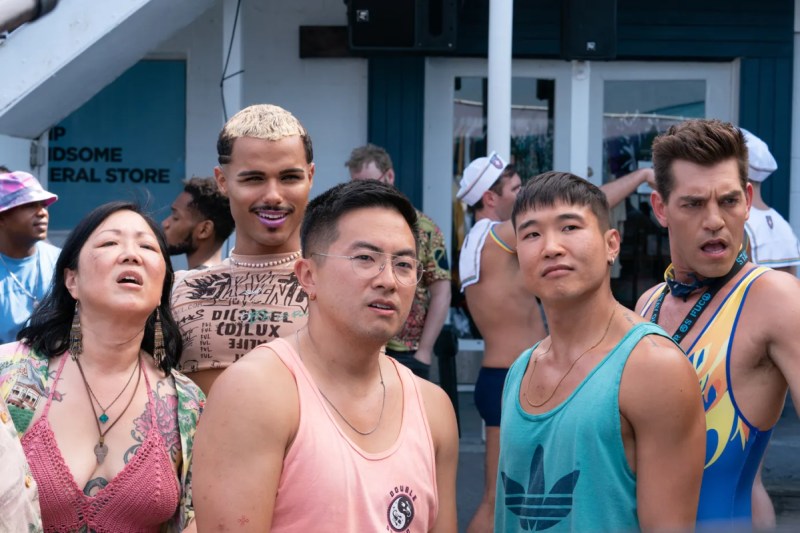 It reminded me of my 30th birthday, of my own boys, of sleeping piled together in bedrooms of a fancy Long Island Airbnb that — in retrospect — I probably couldn’t afford. It reminded me of dirty jokes, endless bottles of wine, and family brunches we cooked together and ate in the backyard. 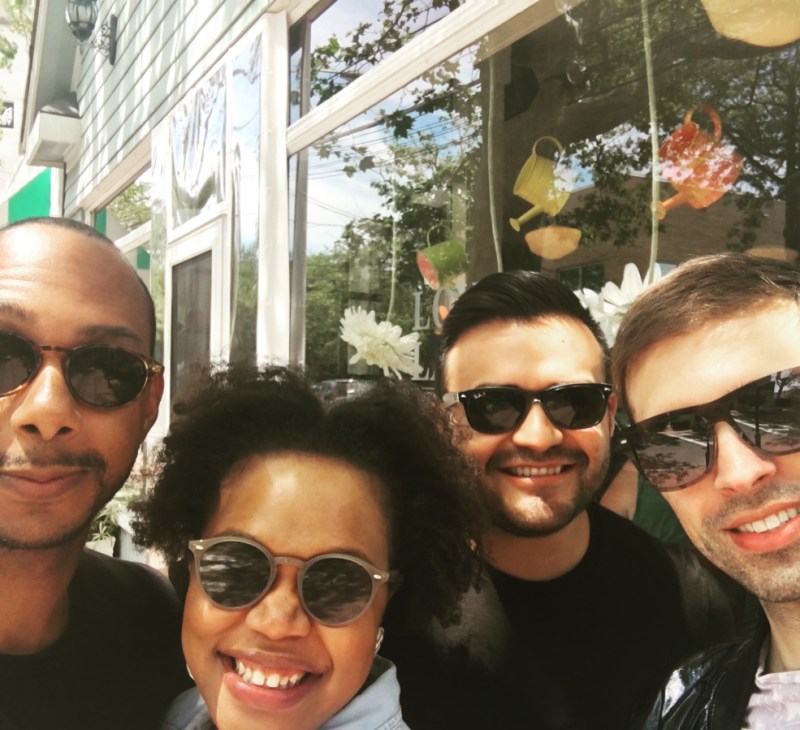 So yeah, I definitely would say it’s worth watching.