On February 23rd, the first ever women’s Ultimate Fighting Championship fight will take place in Anaheim, California. Ronda Rousey will take on number one bantamweight division contender, Liz Carmouche. Carmouche is the first openly gay UFC fighter. Given the size of the UFC and the surprising lack of out female athletes, she’s poised to become one of the most famous LGBT athletes in the world. 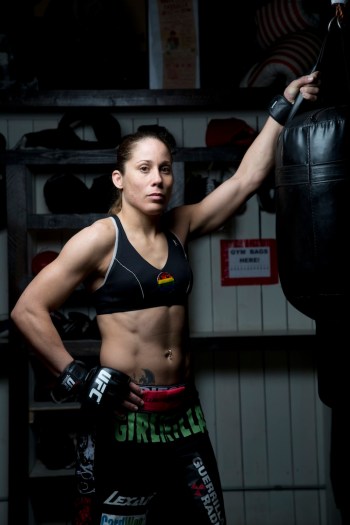 Liz was born to a military family and raised in Okinawa, Japan. She’s lived in San Diego for the past six years and served three tours in Iraq leaving the military after five years and four months as a sergeant. When asked about her time serving under DADT, she has a particularly poignant story to tell:

“My best friend in the Marines, her name is Kim, said one day while we were in Iraq that homosexuals in the Forces should be put on the front line because they deserved to die. This was my best friend talking. I knew then I couldn’t come out to anyone but when I left the Marines, I called Kim and let her know ‘Hey, I’m one of those people you wanted killed.’ I was very blunt about how she’d make me feel and she did a total 180. She told me she loved me and would never, ever want to see me get hurt. She said the way she grew up, she’d never met a gay person and didn’t know what she was talking about. To this day she thanks me for changing her views on gay people and now says she can’t imagine why she was ever homophobic.”

Liz has allowed this experience to inform her decision to live as an out athlete saying, “Being gay is part of who I am. It has nothing to do with how hard I train, or how good an athlete I am or any opportunities that I may get in MMA. Mostly, I came out because I felt that if I was brave enough to be a Marine, brave enough to be a professional fighter, then I should be brave enough to not hide who I am.”

Liz, known as The Girl-rilla, did a quick phoner with me in hopes of enticing some people to check out the fight on February 23rd. She talked more about her experiences under DADT, how she got into MMA, and her adoring fans, “the lizbos.”

Who are some of the athletes you looked up to growing up?

I didn’t really look up to anybody. I’d say the closest person was probably Mia Hamm. My mother was always my role model for everything. She’s a really strong independent woman. She played the role of mother and father for me growing up. She worked multiple jobs just to make sure that we could have a good living. She was always very thoughtful. My mother told me that if there was anything that I ever wanted, I was capable of achieving it. She was the core of everything in my life.

How did you get started in Mixed Martial Arts?

I got started in MMA through the military and then through friends who kinda guided me towards doing MMA because they thought it would fit what I was looking for physically. They thought my personality was a good match, too.

Do you think the Marines prepared you for MMA?

Yeah, absolutely. I think that there is nothing that will ever compare to what I experienced while I was in the Marine Corps. I’m definitely a lot stronger mentally than I would ever had been had I not been in the military. There’s also some very similar martial arts training they do in the military that you can use in MMA, so it’s kind of crossover for me.

How did you feel DADT impacted you during your time with the Marine Corps?

The Don’t Ask Don’t Tell Policy had a huge impact on me personally. There were a few people that were trying to out me while I was in the military who made my life very difficult and definitely put me on edge. It made some experiences that should’ve been more rewarding and fun difficult just because I was constantly wondering if somebody’s going to find out that I was a lesbian.

How do you feel about the recent announcement of women being allowed into combat positions?

I’m split on that one. I think women are a lot stronger than people think they are and they definitely have the ability to do it. What concerns me are that men aren’t ready to see women in those situations and as a result, may put themselves in compromising situations or not listen to orders just because they see a woman injured for any reason. But I think will women will step up and show everybody just how strong and how ready they are for this.

How did you get the news about your world title shot against Marloes Coenen?

It was ten days out from a fight and I’d just come out of another fight with a very short notice and so I was taking an actual weekend out and being fat that night. My girlfriend and I were celebrating and having a good time. I think I was eating steak and mashed potatoes and bread, just way too many carbs for an evening dinner. My coach gave me a phone call and I thought he was, well he was a little intoxicated, just messing with me and he asked me if I wanted the opportunity of a lifetime and he said that they were offering me a fight with Marloes Coenen and we jumped on it. It was a great experience.

Did you have any sort of goals when you started off in the UFC? I know you began fighting because you missed the physical nature of the military…

This started as kind of a hobby. I just wanted to get in shape and I wanted to have that checked off my bucket list to try it out. Since then I’ve just been enjoying this experience and letting it take me wherever it goes.

You seem like you have a really good relationship with your trainer and coach. How long have you been with them and how did you wind up together?

I’ve been with them since January of 2010 and it feels like we chose each other. We have a great relationship. They’re great people, some of the only people in life I actually trust, great senses of humor, they treat me like I’m their daughter and they protect me and they guide me through everything. I found the gym because they live close to my house and I’ve stuck with them ever since. 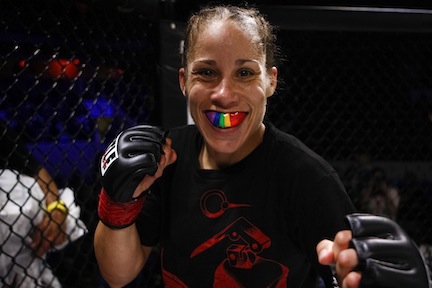 Any particular music you listen to train or get pumped for a fight?

How would you describe your personality in the ring?

What do you think gives you an advantage going into the title fight?

Everybody has a strategy going in and each person is unique as a fighter and as a person and that influences how they compete. I think my military background as well as being a well-rounded fighter is going to help in this title fight.

If someone has never seen UFC before, what do you think would be a good intro to the sport?

I recommend they watch my fight on February 23rd if they want to get into it. It’s gonna be a great one. It’s going to be history in the making.

You wanna talk a little bit about your fans that have a unique nickname?

We refer to them and they often refer to themselves as the lizbos. It comes from the mastermind, my coach Manny. He came up with it as a play on Liz and the word lesbian. People have just loved it and gone with it ever since.

Have you noticed any differences between how the UFC is handling the women’s and the men’s sides.

Honestly it seems up until this point they have treated us as equals. They are giving us just as many opportunities as men that start off in UFC so I don’t see there being any strong difference whatsoever.

What kind of impact do you think being an out athlete can have on the UFC and sports in general?

So far the UFC has been really awesome and taken me in with open arms. I’ve experienced no bigotry towards me being a lesbian and being out. If anything, they’re trying to open up doors and position me as a role model for the community and help me reach out to people. It’s amazing and something I never would have expected. The organization is great because you’re beating your body up every day, in and out, non-stop. From broken fingers to broken noses, you fight through it and yet the most amazing thing to come from this for me has been meeting great people. I’ve seen people from all walks of life that I never thought would be fighters be competing and that’s been the most surprising and rewarding experience.

You can see Liz in the headlining title fight on February 23rd at 7pm PST.