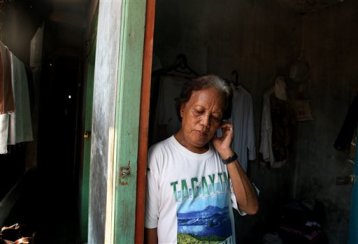 The San Francisco Gate (via the Associated Press) has a piece today about Evie, a transgender woman living in Jakarta, Indonesia, who once served as a nanny for “Barry” Obama. The first feeling you’ll feel while reading this story is how unfortunate it is that a reporter for the Associated Press isn’t apparently familiar with all the guidelines for reporting about transgender people, and the second feeling you’ll feel is sadness for Evie and the life she lives now, which she describes as “waiting to die.”

The third feeling I felt, oddly, was “I’m glad this guy is our president,” which is an off-topic sentiment so I’ll get it out of the way right now: It seems like Obama’s greatest strength as an American leader is the diversity of experiences he had growing up — simply put, he’s lived/learned/worked in a variety of places with a variety of people and that matters because the more types of people you know, the less you rely on stereotypes. Surely any reasonable contender for President of the United States should bring a wealth of diverse experiences to the table, but as George W. Bush and many of his predecessors proved, most do not and they get elected anyhow. Obama’s existed in places where he felt like an outsider and places where he had to work harder than everyone else to get half as much. Conversely, his weakness seems to be a lack of experience with rich white Republican douchebags — an insular culture often composed of people who know no other world but their own and therefore move swiftly and instinctually within it. Like, it’s obvious that he’s more comfortable talking to regular people than to senators.

Anyhow! Today’s story actually isn’t the first time the press has reported on this particular caretaker. In November 2010, according to The New York Times, Obama visited his former neighborhood in Jakarta — although apparently he’d postponed his visit three times and the residents were getting a little disillusioned — and The Times spoke to residents there about Barry’s childhood. A former neighbor told The Times that “local residents regarded Mr. Obama’s mother as a “free spirit,” Barry, who was chubby, was referred to as the “boy who runs like a duck.'”  The article also had the following tidbit to share regarding Barry’s nanny:

His nanny was an openly gay man who, in keeping with Indonesia’s relaxed attitudes toward homosexuality, carried on an affair with a local butcher, longtime residents said. The nanny later joined a group of transvestites called Fantastic Dolls, who, like the many transvestites who remain fixtures of Jakarta’s streetscape, entertained people by dancing and playing volleyball.

It sounds so lovely when they put it that way — “Fantastic Dolls”! — but of course the reality is anything but lovely. (It also sounds perhaps inaccurate, as it’s unclear whether Evie has ever identified as a gay man, or whether she has always identified as a transgender woman.) The AP piece uses Evie’s story as a gateway into discussing what life is like for transgender people in Indonesia. Here’s a hint: it’s terrible.

The article describes the climate for Indonesian transgender people as “complex.” It follows:

“Nobody knows how many of them live in the sprawling archipelagic nation of 240 million, but activists estimate 7 million. Because Indonesia is home to more Muslims than any other country in the world, the pervasiveness of men who live as women and vice versa often catches newcomers by surprise. They hold the occasional pageant, work as singers or at salons and include well-known celebrity talk show host Dorce Gamalama.

However, societal disdain still runs deep – when transgenders act in TV comedies, they are invariably the brunt of the joke. They have taken a much lower profile in recent years, following a series of attacks by Muslim hard-liners. And the country’s highest Islamic body has decreed that they are required to live as they were born because each gender has obligations to fulfill, such as reproduction.” 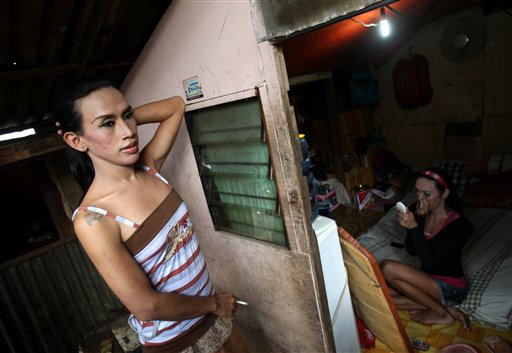 The caption for this photo from the AP reads: "In this Friday, Jan. 27, 2012 photo, an Indonesian transvestite who identifies herself as Melda stands outside the room where her friend Adis applies some makeup before going door-to-door to dance for small money at their boarding house in a slum in Jakarta, Indonesia. "

Evie’s own story reflects this hardship. Beaten by her father for being a “sissy” when she was young, Evie dropped out of school after third grade because she couldn’t take the bullying and harassment. Things turned around when she taught herself how to cook, a skill she picked up so handily that before long she was working for many high-ranking officials. At a 1969 cocktail party, Evie met Obama’s Mom, Ann Dunham, who went wild for Evie’s beef steak and fried rice and hired Evie to work for her family. Eventually Evie became eight-year-old Barack Obama’s caretaker:

Neighbors recalled that they often saw Evie leave the house in the evening fully made up and dressed in drag. But she says it’s doubtful Barry ever knew.

“He was so young,” says Evie. “And I never let him see me wearing women’s clothes. But he did see me trying on his mother’s lipstick, sometimes. That used to really crack him up.”

When the family left Indonesia in the 1970s, Evie says she was unable to find more work as a maid and eventually became a sex worker, which is a very dangerous occupation in that area, especially back then. Soldiers would often harass groups of what they called “warias,” loading them into trucks and bringing them into empty fields to beat them up. In 1985, one of Evie’s friends escaped a raid by jumping into a “canal strewn with garbage,” and Evie and her friends finally found her with “her body swollen, face bashed in,” a moment that changed Evie’s life forever: “I knew in my heart I was a woman, but I didn’t want to die like that. So I decided to just accept it. … I’ve been living like this, a man, ever since.” 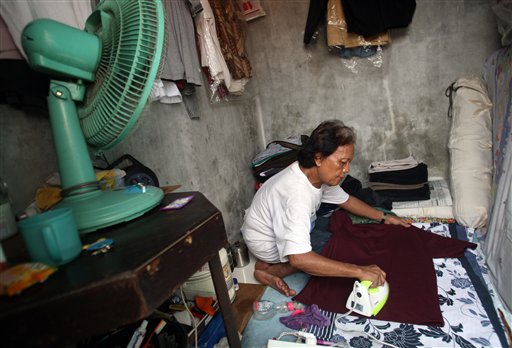 (Dita Alangkara /AP) the AP Caption reads: "In this Friday, Jan. 27, 2012 photo, Evie, also known as Turdi, the former nanny of U.S. President Barack Obama, irons laundry in her room at a boarding house in a slum in Jakarta, Indonesia. Evie, who was born a man but believes she is really a woman, has endured a lifetime of taunts and beatings because of her identity."

According to Wikipedia, LGBT people in Jakarta are legally labeled as “cacat,” which means “mentally handicapped and therefore not protected under the law.” The law doesn’t protect trans people from discrimination or harassment, won’t give trans people documents reflecting their true gender identity, and the Islamic Indonesian Ulema Council ruled that transgender people must not seek gender reassignment surgery. A prominent Muslim cleric from the council said that “If they are not willing to cure themselves medically and religiously” they must be willing “to accept their fate to be ridiculed and harassed.” The Council believes that “each gender has obligations to fulfill, such as reproduction.” 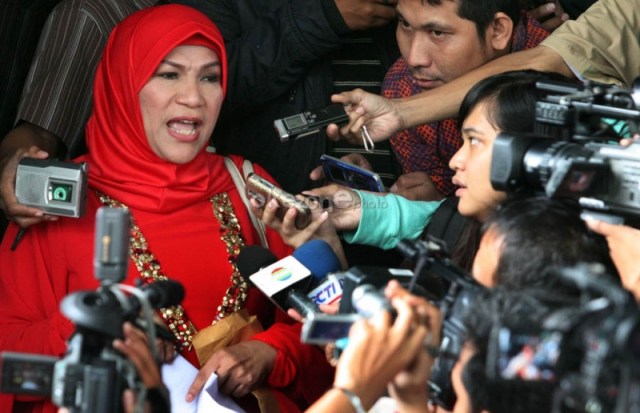 Various news outlets have picked up this story, with mixed results — The Toronto Star, for example, headlines with “Barack Obama’s cross-dressing former nanny, other transgenders face abuse in Indonesia” and I saw the sentence “Barack Obama’s former nanny has been revealed to be a gay transgender man living on the streets of a slum” appear in at least five random syndicated websites. Of course, we can always count on The Daily Mail for a zinger — their headline reads “Revealed: Barack Obama’s gay transgender prostitute nanny who made him laugh by trying on his mother’s lipstick.”

Although I’m sure many will read an agenda — a liberal or conservative agenda, really — into this story, I just read it as a profile of a brave and important person living under horrifying circumstances. It’s worth noting, however, that although the political and even the religious climate in the US is infinitely friendlier than in Jakarta, many transgender women here, and especially trans women of color, face the same struggles/hurdles/landmines/blockades that Evie does: homelessness, poverty, ostracism, violence, employment discrimination and harassment in school.

The AP story ends on a sweeter note:

She says she didn’t know the boy she helped raise won the 2008 U.S. presidential election until she saw a picture of the family in local newspapers and on TV. She blurted out that she knew him.

“I couldn’t believe my eyes,” she says, breaking into a huge grin.

Her friends at first laughed and thought she was crazy, but those who live in the family’s old neighborhood say it’s true.

“Many neighbors would remember Turdi … she was popular here at that time,” says Rudy Yara, who still lives across the street from Obama’s former house. “She was a nice person and was always patient and caring in keeping young Barry.”

Evie hopes her former charge will use his power to fight for people like her. Obama named Amanda Simpson, the first openly transgender appointee, as a senior technical adviser in the Commerce Department in 2010.

For Evie, who’s now just trying to earn enough to survive each day on Jakarta’s streets, the election victory itself was enough to give her a reason — for the first time in a long time — to feel proud.

“Now when people call me scum,” she says, “I can just say: ‘But I was the nanny for the President of the United States!'”