Ok, let me be honest, I spent a lot of time this summer doing KENKEN puzzles in The New York Times. So what if I couldn’t find a job? I am now a master of the fine art of Japanese math puzzles. This of course means that I am a genius soooo I’d have to say that I had a pretty successful summer vacation.

When I wasn’t exercising my Einstein-like brain, I was doing free yoga with the 60-and-up crowd at my local library, frequenting craft stores in search of yarn, and buying socks with my grandmother. I do understand that disclosing such intimate details of my steamy summer puts me at risk for crazy stalkers and anywhere between a million and a billion friend requests on facebook, but because I care about every person who takes the time to read my words, I opted to leave nothing out. You’re welcome.

My summer was in fact rather uneventful. I spent it in Florida, a place I have always called “home” but never felt I truly belonged. And although I ended the last school year more than ready to go back home, once there I quickly I remembered why I had been so excited to leave Florida in the first place. I spent my first year of college gaining confidence and becoming more “me” than ever before, but once I got back home I seemed to lose much of the self-assurance that I had gained during the school year. Old fears about not having “enough friends” or looking “cool” began creeping up—my self-confidence was waning. I had to constantly remind myself that it is OK to not have a million friends and to not go out all of the time, I like my alone time; it’s not loneliness, it’s sanity.

The highlight of my summer was my weekend trip to New York to join the rest of the Autostraddle team for NYC Pride (I especially enjoyed bringing coffee and bagels to Riese and Laneia, I felt like a real intern!). Walking around in the ridiculous heat of NYC wearing what was really just a bra and some fabric doing it’s best to look like a skirt, was most certainly a moment that I will never forget. Walking long distances in minimal clothing while waving a rainbow flag really agrees me, I think I’m going to major in it. 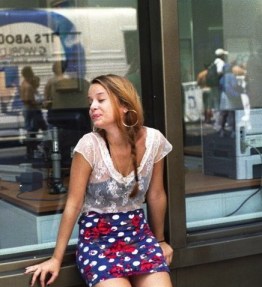 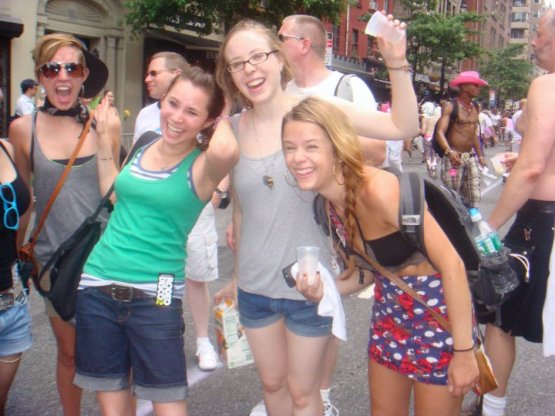 I’d say that it is a pretty good sign that I spent most of my summer wishing I was in New York—it is always helpful to actually want to go back to the place you will be spending a good chunk of the next three years in, if not more. I managed to get a job on campus so I was allowed to move in a week before classes start and take some time to settle in before the craziness begins. I’m living in a single this year so I’d really like put a life-sized poster of Ricky Martin on my door—I haven’t actually found one yet but I feel like it is sort of necessary for my existence.

The day before the freshmen were due to move into the Barnard Quad, I found myself at the Upper West Side location of the store that sells the Barnard uniform, AKA Urban Outfitters. While in the store I noticed a bunch parents with girls who looked EXACTLY like I did last year. But then all of the sudden in the middle of a fantastic sale, my stomach began to tighten and my breathing began to shorten—wtf?? I was having an anxiety attack that was triggered either by the girls shopping with their parents or the twenty dollar boots. Because cheap shoes have never brought me anything but pure joy, I had to guess that this seemingly random attack was brought on by the most-likely-Barnard-freshmen-girls. Was I afraid of them? No. Nervous for them? Not particularly. Scared to go to school with them? Not at all. These girls reminded me of my first week in college and I cried A LOT that week. I imagine that my anxiety was a mixture of a million things pent up inside of me and the trendy young ladies at the Urban Outfitters were just the catalyst to my inevitable panic attack.

Jenny From The Block

Luckily by the time I moved into my new dorm everything felt right. I feel at home in this college, in this city. And right now I am not worrying about where the elevator is because I know where all of them are! I don’t go back and re-read my past “Lesbianage” posts because reading my words makes me cringe, but I sometimes get random comments on older articles with really awesome advice and encouraging words about college and New York—a lot of “everything thing will be better soon, I promise!” You guys are pretty much the most amazing people ever, just so you know. Reading such comments reminds me of the fear and uncertainty that I felt last year and really puts this whole college thing into perspective. It’s nice to know that yes, it has gotten better. So much better!

Life will always have its ups and downs but because I am more prone to write about the sad and scary stuff rather than the exciting and happy stuff, I am going to fight extra hard to highlight the good of this year and not let any happy moment be taken for granted. Positivity is my goal for the coming year and because I’m pretty sure that positive thinking is what Oprah and her religion of The Secret teaches, I know that I am on the right track.

Another reason I know that I am on the right track? J.lo’s music video for “Jenny from the Block” was on the teevee the other day, which I believe to be a sign from some higher power (most likely Madonna) that this year is going to be good. Just like J.Lo, I am still “Lily from the block” and this year is about being as real as possible…no matter all the rocks that I got, you know?