I’ve been thinking a lot lately about black history. I’m sure that’s to be expected, since it’s February and all. I’m in the middle of editing Autostraddle’s Black History Month series. There’s also a lot of buzz surrounding the reboot of this little known show you may have heard of called The L Word (haha) that has left me, as a television critic, thinking about the long history of queer women’s and queer black women’s representation on screen. This month has found me looking back, questioning, trying to find those patterns and questions that were maybe once forgotten.

Which makes it probably the ideal time to start thinking about a Lena Waithe project. There’s a lot to love about Lena Waithe (whom we’ve more than once jokingly called everyone’s favorite imaginary celebrity girlfriend at this publication), but one of the things I’ve long respected most is that she’s a walking encyclopedia for black television and black pop culture. She studies our creative expression the way that an NYU film student pours over the AFI’s 100 Greatest Films list. She reveres it, references it in her work. She honors it. As someone who lives for black pop culture in the same way, it’s always drawn me to her productions. To paraphrase Waithe – I, too, see the God in us.

That’s why I was intrigued when her first green-lit sitcom, following her historic Emmy moment as the first black woman to win for Outstanding Writing in a Comedy Series, was for a reboot of the 1992 black cinematic classic Boomerang. We throw around words like “iconic” a lot these days in internet slang, but there simply is no other way to describe Boomerang’s 27-year-long legacy in black culture. I rewatched it recently and was floored by the cast alone: Eddie Murphy, Halle Berry, Robin Givens, Martin Lawrence, David Alan Grier, Tisha Campbell, Lela Rochon, and – I’ll still never believe this – EARTHA KITT AND GRACE FREAKIN’ JONES! That’s all before the first line is even uttered! I already want to lie down on a couch. 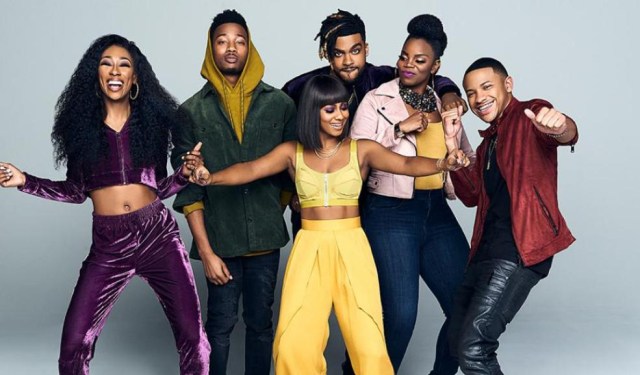 The cast of BET’s Boomerang

If you’ve never seen Boomerang, it’s a romantic comedy where Marcus Graham (Eddie Murphy), a womanizing advertising executive, finds himself in a love triangle between Jacqueline (Robin Givens) and Angela (Halle Berry). Many jokes, howling laughter, and more than a few spit-take worthy lines later, he ultimately ends up with Halle. Waithe’s new sitcom for BET (co-produced with none other than Ms. Halle Berry herself) follows Angela and Marcus’ daughter, Simone Graham (Tetona Jackson) as she and her crew of friends – including Jacqueline’s son Bryson (Tequan Richmond) – navigate life as black millennials conquering careers and romance.

I would have been invested in this project no matter what. It’s smartly written; some jokes held up even better upon re-watch – a rare calling card. It’s unapologetically draped in a love for blackness. But here’s when things get really interesting: BET’s Boomerang has not one, but two, queer black characters in it’s main cast — Angela’s lesbian close friend and client, Tia (Lala Milan), and Bryson’s bisexual best friend, Ari (Leland B. Martin). It’s painfully rare to see a bisexual male character on television, let alone one who’s black and also masc. That’s quite frankly unheard of. Ari is light and funny, he’s a talented filmmaker and one of the boys. His charisma leaps off the screen. None of his friends raise an eyebrow at his antics (well I mean, they do, but not because he’s bi). In many ways, he’s an early heartbeat of the show.

Tia’s a complete scene stealer. She’s defies so many boxes or tropes of what we’ve been programmed to expect from a black lesbian on TV. First, when most black queer women on television are being actively de-sexualized, Tia refreshingly owns her sexuality right out the gate (forewarning, the on-screen joke in the second episode that leads to the character revealing her sexuality to the audience is a little cissexist and gave me pause. The joke is very brief and I’m hoping that moving forward Boomerang finds ways to address Tia as a lesbian without throw away lines that focus on genitalia). She’s a dancer at a strip club who dreams of stardom and performs in day-glow body paint with phrases like “Black Lives Matter” and “#MeToo” adorning her thighs. When one of her friends suggests that she sell more of a male fantasy to make better income at the club, you know by making the men believe she’ll go home with them at the end of the night, she rolls her eyes and essentially responds, “Why? I won’t.” 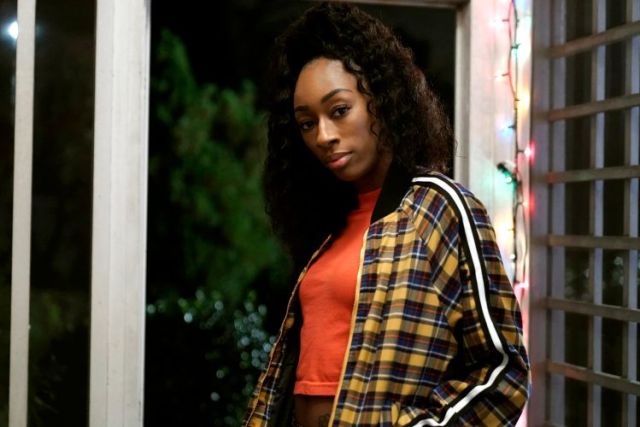 Tia’s love interest has yet to make an appearance, but is slated for upcoming episodes. I did a little digging online and am ecstatic to report that she appears to be a stud butch, yet ANOTHER essential representation that we almost never get to see. Which is one of the many reasons that with less than two weeks on air, Boomerang is already proving itself to be vitally important.

As many of you know, Autostraddle maintains the largest independently operated database of lesbian and bisexual women on television. In preparation for this review, I consulted that database and found only two other reoccurring or regular black lesbian characters in American sitcom history. Both of those characters were on television shows that only lasted a single season. They also were isolated within majority white casts. Conversely, one of my longest standing gripes about the current black renaissance on television is the lack of black queer representation in majority black shows. I love Issa Rae’s Insecure, but I’ve never known a real life crew of black millennials in a big city like Los Angeles who had no gay friends. It’s more than “not representative” of the times we live in. Millennials of color make up the largest portion of LGBT folks in our age bracket. Against that backdrop, what we’re facing is erasure. Flat out.

In Boomerang’s cast of six regulars, we have two out queer characters who are loved and supported by their friends. Their sexuality is treated matter of fact and nonchalantly. My favorite moment? When Simone texts Ari to ask about the new male hookup he brought to game night, he writes back “Oh that’s all me.” She asks about ole girl from last week. His cocky response? “That was last week.” It’s the kind of playful boasting I’ve shared with friends in text messages that are definitely not meant for public consumption. There’s nothing more that’s needed to be said. Similarly, none of Tia’s friends bat an eye that she works at a strip club. There’s no judgement in this crew’s love for each other.

It can’t be overstated what a breakthrough moment this is for black television. I can personally attest that within the last decade, BET was still bleeping the word “homosexual” off its airwaves when it ran reruns of sitcoms from other channels. Let that sink in. Now imagine the same network running a new half hour comedy where one of the main characters is a black lesbian who works at a strip club with a butch girlfriend and the other is a bisexual guy who casually talks about his hook ups of multiple genders. Both existing in a world where they’re allowed to be free from a white gaze. That’s the power of Lena Waithe.

Last week we found out that F/X’s groundbreaking black and brown LGBT production Pose had been snubbed by the NAACP Image Awards. The Image Awards, celebrating their 50th anniversary this year, were designed to honor outstanding people of color in film, television, music and literature that are often forgotten or left behind by white critics and media. Pose’s omission, especially given its recent success in nominations at the Golden Globes and Critic’s Choice awards, was particularly glaring. The Image Awards have recently proved themselves progressive when it came to black and brown LGBT inclusion. This setback was a poignant reminder.

Those of us who fight for inclusion and a home in our communities must always remain vigilant. It’s not enough to be only partially accepted. We can’t just passively assume that our humanity will be seen when there are so many who would rather ignore that we’re here. As Pose producer, director, and screenwriter Janet Mock so elegantly stated in the wake of the show’s shutout: “Respectability politics will not save us.”

That’s the environment in which Boomerang is making its debut – one in which black visibility in pop culture is peaking at one of its greatest heights, but black queer and trans folks cannot give up our fight. We must continue seeing the humanity in ourselves, because so many others refuse to. I couldn’t be more excited to have Lena Waithe’s creativity out there pulling for us.

Boomerang is airing on BET, Tuesdays at 10pm EST. For those without cable, a season pass can also be purchased on Amazon Prime.