What ho! Welcome to this recap of Legends of Tomorrow season 7, episode 7, “Speakeasy Does It” aka one of the best episodes of the show ever which is a really high bar but I loved it so much?????

We open once again in the 20s, where we’ve been for a few episodes, which has actually been kind of nice. The Bullet Blondes Gang ditches Hoover’s car and get ready to hop on a train. Their plan is to buy three tickets and have the rest hide out in the mansion key, until they realize Gary’s misunderstanding of human money and inflation means that he over tipped the last waitress they had by so much they only have enough money for one person to travel. 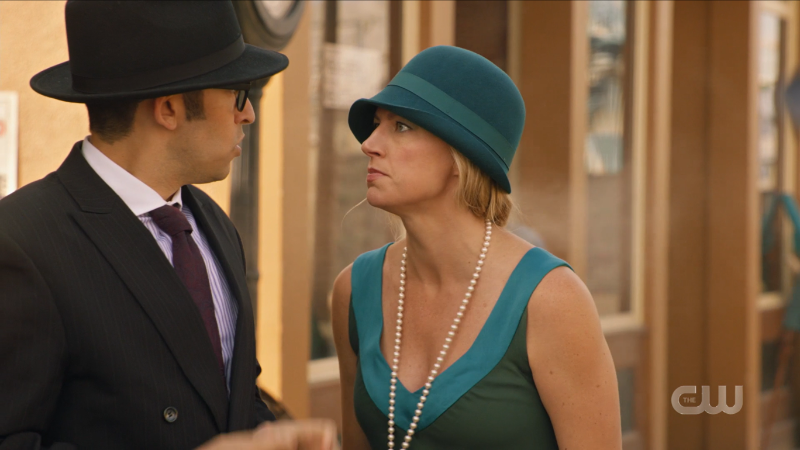 “I *will* make this a No Boys Allowed team if you keep this up, Gary!”

And in the meantime, they have to find a way to hide the city’s most wanted blondes. Zari spots a wig store and knows it’s her time to shine, so she drags her captains in and tries to find them a suitable disguise. She tries to ask the store owner for help, but he fully ignores her. Zari is a little confused until Sara tries to talk to him and he answers the straight-passing white lady readily and it’s clear what’s happening here. (Spoiler alert: it’s racism.) 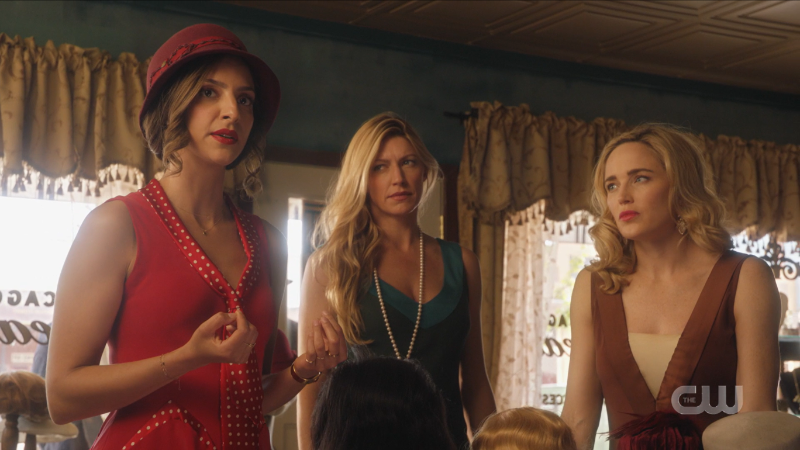 The man moves to fulfil Sara’s request and Ava and Sara apologize to Zari and promise to hurry up. They take two not-blonde wigs but since the fuzz caught sight of Hoover’s car, they have to pay the rest of their easy-earned money to sneak out the back door of the shop.

Zari is furious and declares how much she hates the 20s and how only Nate, their token straight white man, actually fits in here. And this is one thing that I’ve always appreciated about this show; I remember back in the first season, when Stein was delighted by the 50s, calling it idyllic, Jax and Sara had to point out that he only feels that way because he’s a straight white man. While of course they water down the truth of the kind of racism and sexism this particular group might have been met with for this romp of a show, they never deny its existence or shy away from putting words to it. 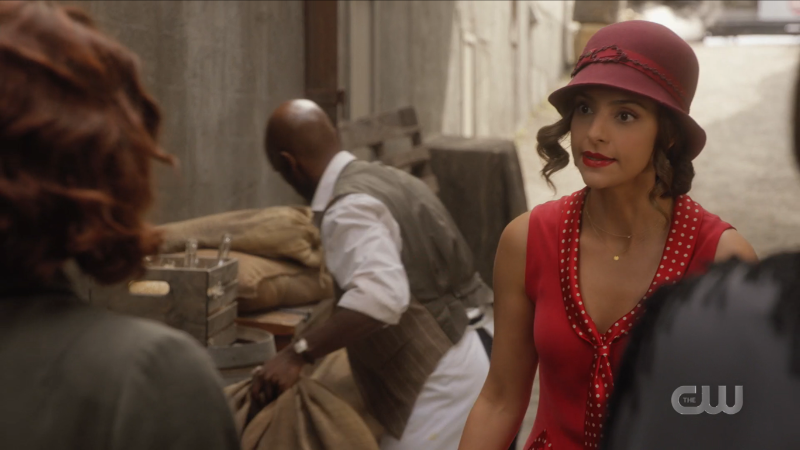 Ava and Sara could be doing more to proactively protect their team from situations like this but I guess there’s a lot going on.

Luckily for the Legends, however, the alley they emptied into happens to be the entrance to a speakeasy, and Zari managed to say the password in her fury…because the password is password.

The first thing the historian in the group notices is that the Speakeasy is inclusive, a rare thing to see in the 20s in mob-run Chicago. It seems, at least for the moment, they’ve found a safe haven.

Slightly less lucky are Spooner, Astra, and Gideon, who are sneaking around on a train they don’t have a ticket for.

Spooner tries to map out a plan and Astra teases her for sounding like Ava, which is cute on at least three levels. The tickettaker comes and they make a break for it, and try to play it off when they’re caught, but ultimately need to be saved by a woman named Maude, who lies and says they’re part of her band with the energy of a drunk stranger in the bathroom telling you not to call your ex like she’s known you for years. 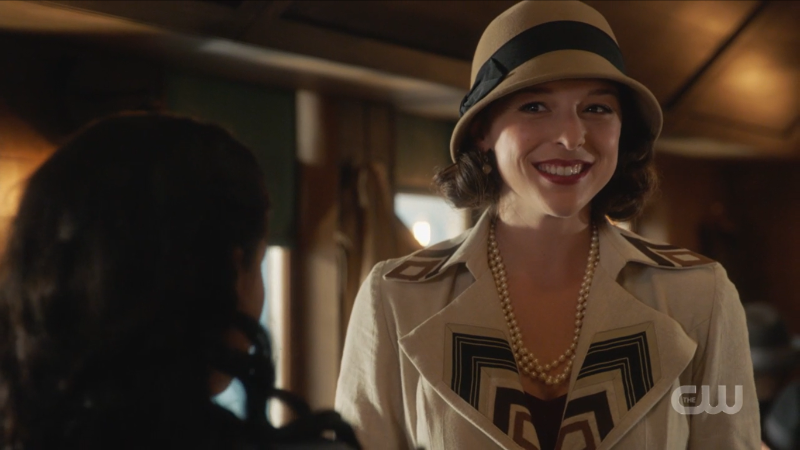 “Did we just become best friends?”

Back in the Speakeasy, Ava is stressed because the Bullet Blondes are all over the papes. They’re being called robbers, bootleggers…and worst of all, sisters! 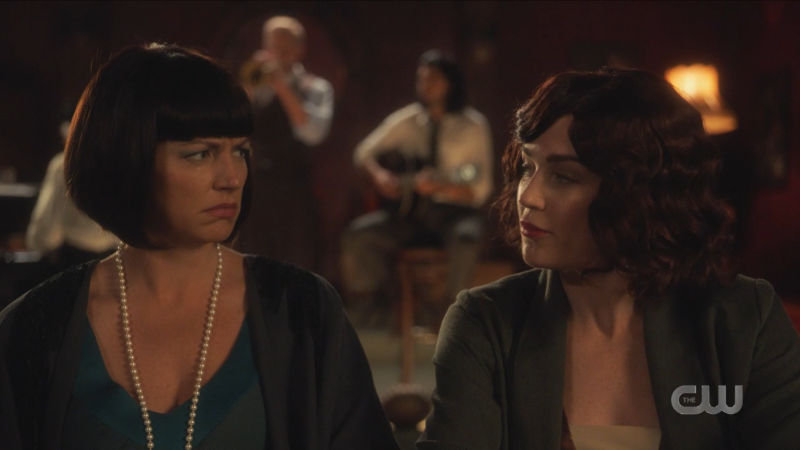 But that gives Sara an idea. They need more money to get to New York, the world already thinks they’re criminals…and they happen to have an endless supply of whiskey at their disposal. So she works out a deal with the owner, Eddie, and sells him some booze, offering him a sizable cut in exchange for use of their storage closet and a lack of questions.

What the Bullet Blondes don’t know is that they’re running out of time; Robot Hoover is hot on their heels.

Meanwhile, The Spatula Squad thanks Maude for her quick thinking and for using her boyfriend’s name and her manager’s scary appearance to their advantage. Maude says it’s no problem. After all, “gals help gals and make new pals.” 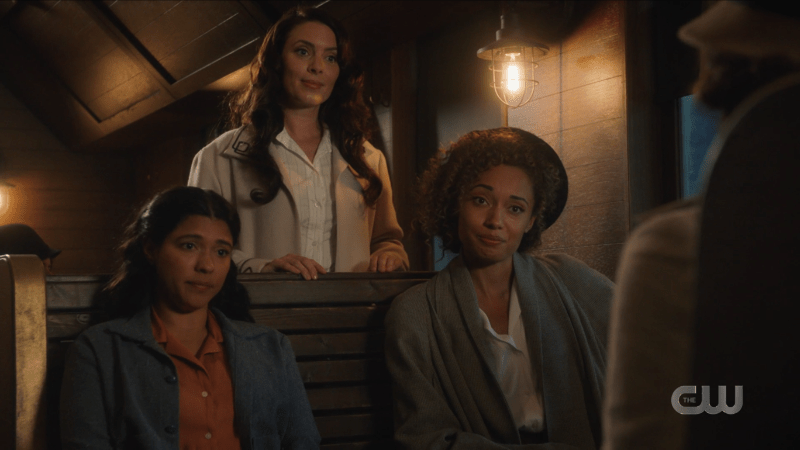 “That’s not quite what gal pals mean where we come from but also, yes.”

Her friend Suzie chimes in, adding that men won’t look out for you like women will. When Suzie says her full name to her new friends, Gideon uses her big computer brain and starts rattling off facts about her life, and Spooner has to ask her to play the quiet game.

Astra lies to Maude and says Gideon is the Lark of London and Spooner is her vocal coach, Esperanza. And Astra? She’s their manager. Maude is taken aback by this, a woman manager, and complains that their current manager isn’t very good at his job. Astra asks to see the contract, ready to return a favor for their new gal pals.

Seeing how predictably absurd the contract is, Astra gives the manager a piece of her mind. He’s racist and sexist too, but Astra doesn’t flinch, and tells Maude that her contract is long since expired if she wants out. So Maude takes her advice and fires her, and as a reward, Astra magics some first class tickets for the masquerading mavens. 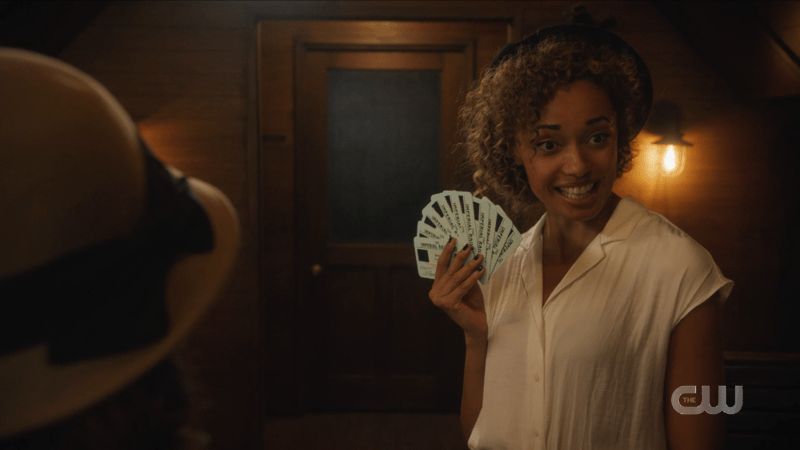 I’m glad Astra is a Legend now but I also do love when her Queen of Hell momentarily shines through.

At the Speakeasy, Zari and Eddie are bonding over their safe haven, and how happy her brother seems on stage. (I don’t know how Ava is letting Zari just use her phone as a mirror all willy nilly but it was cute that Eddie thought it was just a fancy compact.) 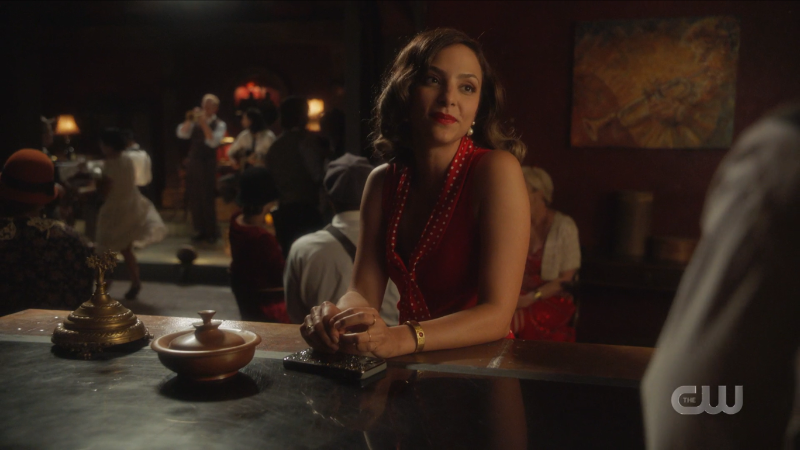 Sorry not sorry for how many gratuitous photos of Zari are in this recap, I just love Tala Ashe, okay?!

He tells her to live in the moment, and feel the here and now, and they have a sweet little bond. Sara interrupts, looking for Ava, wanting to show off all their new money, and since she’s back in the mansion, Sara leads the rest of the team into the “storage closet” for the night.

As soon as the Legends go into the mansion, Maude’s boyfriend Battoni shows up, and roughs him up for going against their agreement and buying liquor from someone else. When Zari comes out to get something from the bar and sees Eddie all bloodied up, she calls for her team and when Sara and Ava emerge, pre-bed and, thus, post-wig, he realizes he’s been unwittingly harboring the Bullet Blondes. 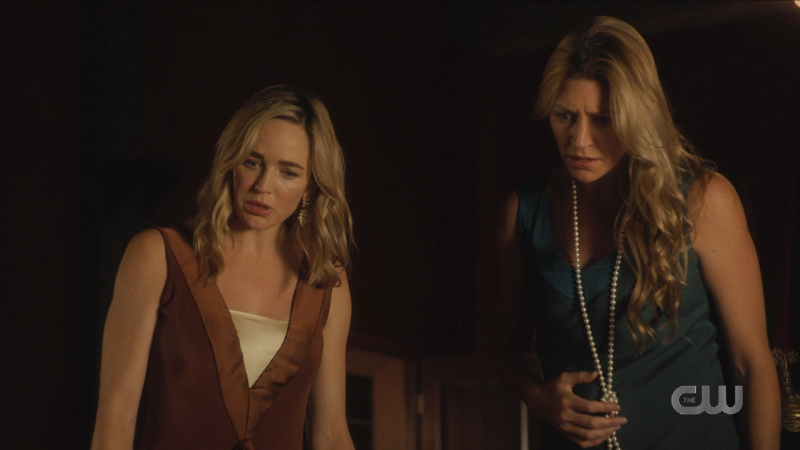 “The reports of our crimes have been greatly exaggerated.”

When the Legends ask who did this to him, Eddie looks up at Sara and says, “You did.”

Eddie blames the Legends for losing his bar, and getting him even more tangled in the mob mess than he already was. Zari is especially furious; this was the first place she felt safe outside Gloria’s farmhouse since they got to the 1920s. And she wants to fix it. She asks her captains to give her 24 hours of being in charge to fix it; she says they can’t keep leaving the timeline worse than they found it. 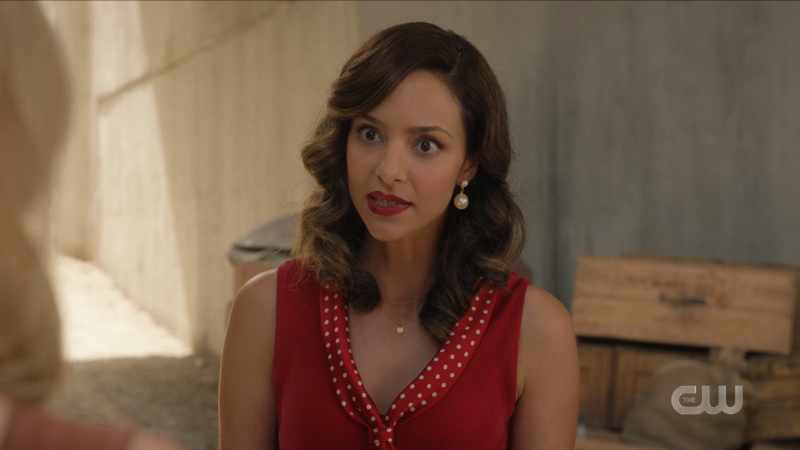 I agree with Zari; closing down a safe haven for people of color and queer people is a surefire way to alter history for the worse.

And specifically, they can’t leave this city’s outcasts without their one safe space. Sara agrees quickly, and Ava is more cautious but also knows Zari is right. So Zari convinces Eddie to come with her, and uses the storage room in the back of the wig shop to show Eddie the magic mansion. She says she wants to hold a fundraiser so Eddie can open up a new bar of his own, and he’s confused but she’s insistent.