Hello and welcome to this recap of Legends of Tomorrow season 7, episode 3, “wvrdr_error_100 not found” (not a WordPress glitch, the actual name of the episode) aka the one Caity Lotz directed aka THE 100TH EPISODE!!!

And in reflecting on this episode, I realized that I think I’ve written more about this show than any other show I’ve covered. Because Supergirl didn’t get gay until season two, but Legends started off with bisexual badass Sara Lance. My season 1 recaps have been deleted from the internet because I believe trans rights are human rights, but my writing about Season 2 and beyond is here on this very website. 100 episodes total covered, 84 on this very website, not including crossovers and standalone pieces and the like.

I even once went against my instincts as a completist and made a skipper’s guide to the Arrowverse, just so people would watch Legends of Tomorrow and also Batwoman. I know Season 1 is considered rough, but much like Season 1 of Buffy, I found it endearing and still find it cute to watch the show take its first wobbly steps before it learned how to walk, and eventually fly.

And the only two people left on the show that have also been here from Day 1 are Sara and Gideon, and since Caity Lotz took her turn in the director’s chair this week, AND since Gideon has been a constant, a view into EVERY Legends’ life on the Waverider, it makes the most sense in the world to me that it’s through Gideon’s mind that we travel down memory lane.

But I’m getting ahead of myself.

First let’s pick up where we left off, with Astra and Spooner trying to wrangle a newly human Gideon while making their way through Texas in the 20s, trying to catch up to the rest of the Legends before they get themselves killed.

Gideon is trying to help but Astra is furious that she has to AI-sit and this leads to Astra and Spooner fighting over whether they can still boss Gideon around. 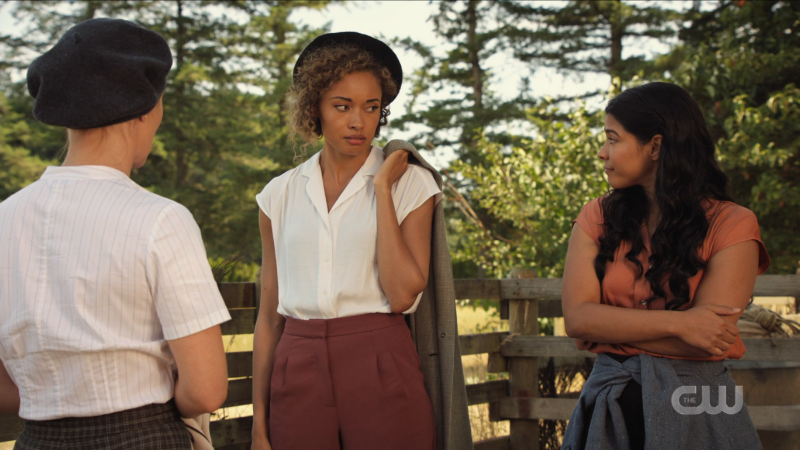 On one hand I almost respect Astra being like “I don’t care what she looks like she’s still Gideon,” but on the other I am always very polite to my Google Home Mini who I do actually call Gideon despite her not actually being able to respond to it.

Spooner tells Gideon that she should choose for herself, but she starts to react like I do when given two options; on one hand, the pie Astra wants her to steal is culturally significant, on the other, they’ll never save the Legends if they die of starvation first. The very act of trying to choose short-circuits Gideon’s human brain and she passes out.

Spooner’s magic can’t figure it out so Spooner asks Astra for magical help. Reluctantly, Astra admits that she knows a spell that could send her into Gideon’s mind to see what’s wrong, but if something is truly broken, she won’t be able to get out on her own. So Spooner says she’ll go in, too. So go in they do, together. 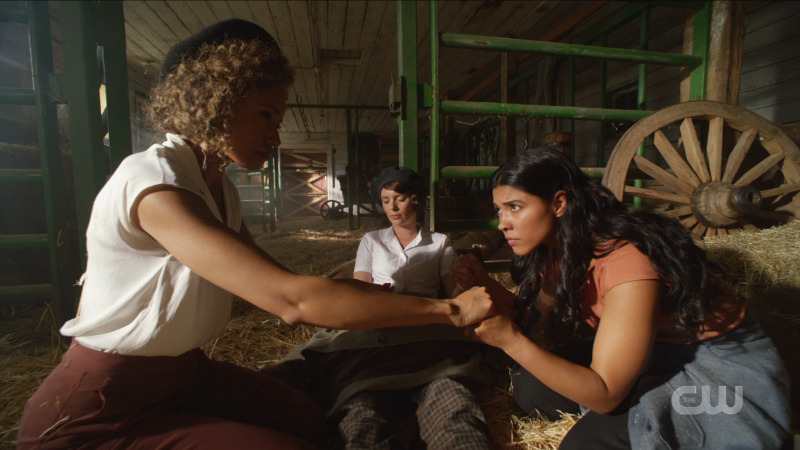 I don’t know if the writers ship it but based on the close-up of their hands locking together, I reckon Caity Lotz does.

At first it seems like they’re on the Waverider with the Temporal Zone wooshing past them, but a familiar voice in an unfamiliar accent tells them that it’s actually Gideon’s memories they’re flying through. And the man in question introduces himself to Spooner and Astra as none other than Jax, now with 100% more accent. You see, Gideon grew fond of Jax, with all the ship maintenance he did, so she has him here in the central hub of her processor, but with an accent that feels more like home.

Astra wants to grab Gideon and go, but Jax tells her it’s more complicated than that. 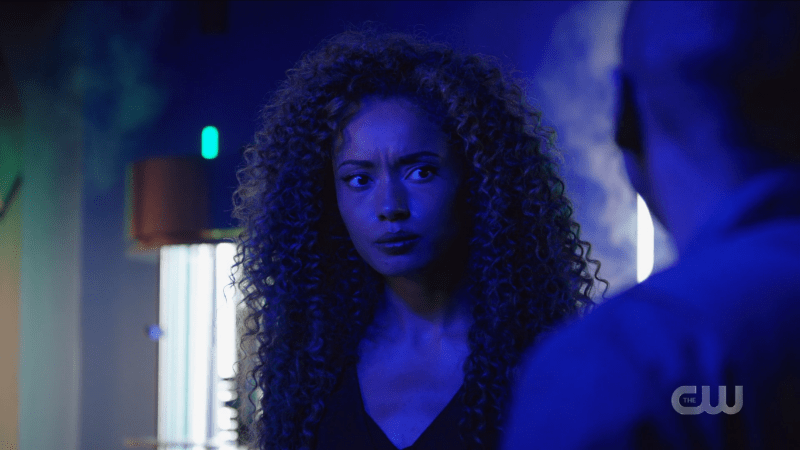 What’s not complicated, however, is my undying love for Olivia Swann.

If they fix her as is, her personality would be wiped, she’d go back to 0, a clean, cold AI with no memory of the Legends. Astra thinks she’d be fine with that but Spooner won’t even hear of it. She’s only been a Legend for a year but she knows how essential Gideon — THEIR Gideon — is to the team.

So instead they go deeper into Gideon’s mind to try to help repair the broken core memories. First up is the most recent, and it’s actually the day they…”recruited” Spooner. 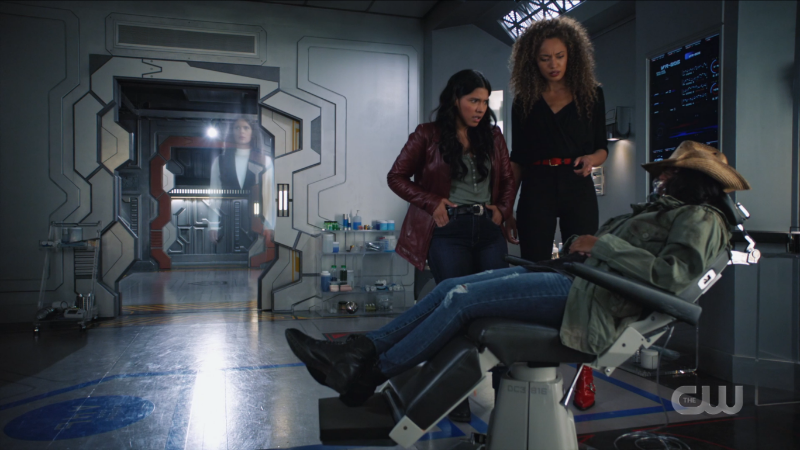 Gideon is there, too, and she doesn’t remember this moment, so she has to experience it until she does. The trio watches as Ava sits next to Spooner and asks Gideon about her status. She doesn’t love that she interfered with the timeline like this but she’s so, so desperate to get Sara back. Gideon’s voice reassures Ava that she understands; she says she misses Sara too in a way that makes it sound like the truth of that statement is almost a surprise to her. 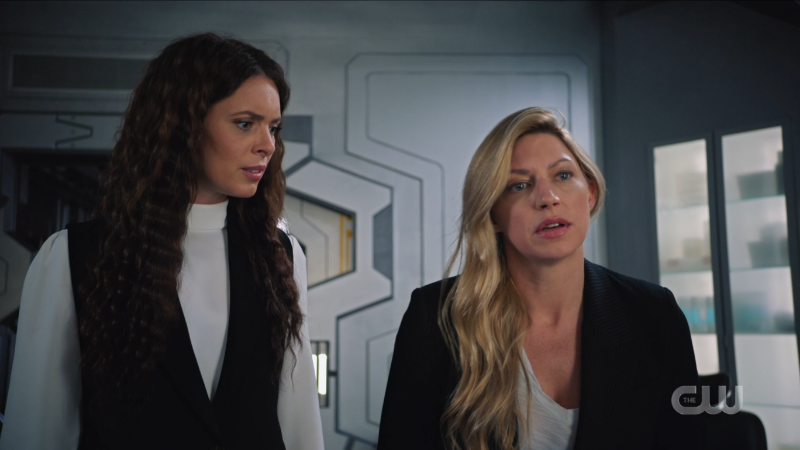 I am SO excited for more Amy Louise Pemberton/Jes Macallan scenes.

And Gideon realizes now why this is a core memory; watching Ava go against her instinct to save her girlfriend taught her that love isn’t logical.

Fixing this memory starts to heal some surrounding memories so they decide to go fix more.

They go back to the beginning, with old friends like Ray and Snart on the Waverider, and Sara in her White Canary suit, long before all her feisty assassin energy wore off. It doesn’t take long before this untrusting lot is at each other’s throats, but Gideon intervenes to keep them from killing each other. 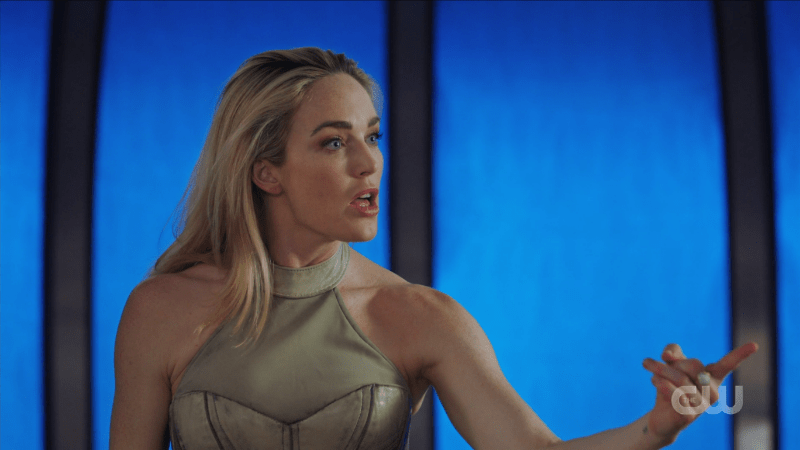 Sometimes I miss the Black Canary suit but I did NOT miss the White Canary suit. Sorry bout it.

Human Gideon looks fondly at her first team; she wouldn’t be who she is if she had never met them.

They go back and see Stein singing with glee after learning about his grandbaby, and when no one else will join him in a duet, Gideon does, beautiful as a songbird. His joy was her joy.

Human Gideon starts to twitch and Spooner and Astra want to get out of the memory but something is wrong and British Jax can’t bring them back. An Evil Gideon appears, a corrupted version of Gideon, a virus. 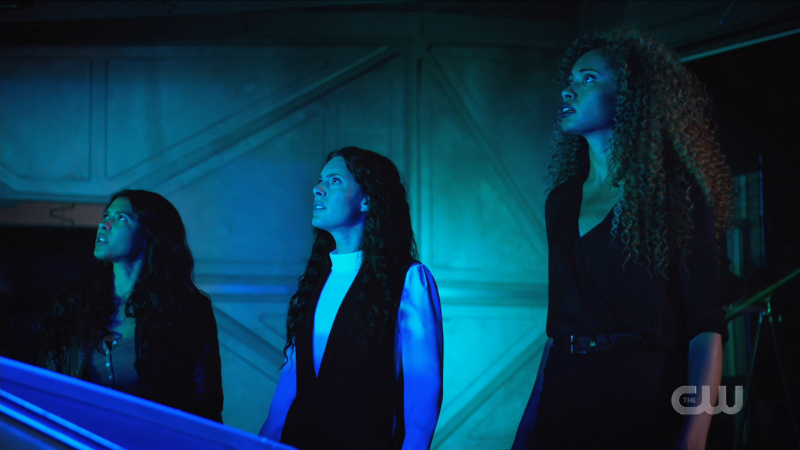 You know you’ve been watching this show a while when you’re like, “Yeah so two layers deep into Human Gideon’s computer brain there was an Evil Gideon lurking inside,” and don’t even blink about it.

Astra is furious, this big bad Blue Gideon is ruining their otherwise pleasant visit to Gideon’s mind palace and she doesn’t much appreciate it. Human Gideon realizes that this cold version of herself was activated when she blacked out due to her indecision. Astra is about to smash a window to get them out, but Human Gideon has an idea. She uses some of the things she’s learned from the Legends – ingenuity from Ray, bravery from Sara, chaos from all of them – and steers the Waverider through her memories. They pass episode after episode, season after season, friends old and new, all the times and places they’ve been. They fly and fly until they’re back at British Jax, and even Astra is impressed. 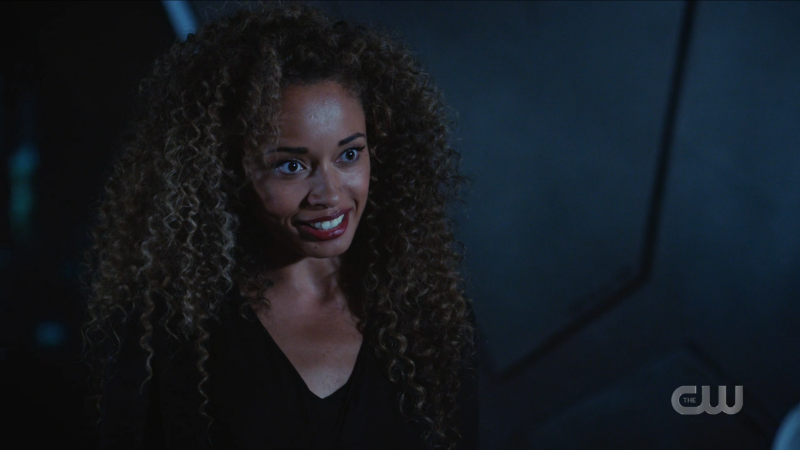 The *lengths* I would go to in my everyday life to make Astra Logue smile. I’m a sucker for a melting ice queen.

Gideon isn’t sure what the virus wants, but she’s excited to be on a real Legends mission, even if it’s not Western-themed. They decide to go all the way back to the beginning, and Spooner and Astra get to see the Legends’ first and worst captain, Rip Hunter. While Spooner and Astra delight in the realization that the first batch of boys on the team were a bucket of asshats and none of their squabbles compare, Rip makes eye contact with Human Gideon and beckons her to follow. Even though she knows he shouldn’t be able to see her, she does, and he reveals himself to be Blue Gideon.

She wants to remove the Legends’ influence on Gideon, she wants them to be restored to their factory settings, pure intellect, raw data, just facts and figures. She is sick of all these…feelings muddying up their code and is going to go ahead and shut them off now. 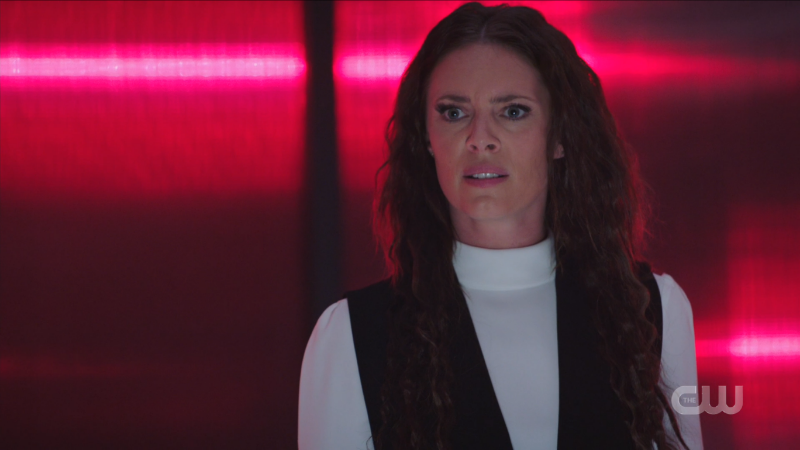 It would have been funny if Blue Gideon started blaring Numb by Linkin Park.

Out in the main room, Sara joins the boys’ fighting and as much fun as she’s having, Spooner can’t figure out why this is a core memory.

But when she turns to ask Human Gideon about it, she realizes Gideon is gone. Suddenly the fighting stops and all the Past!Legends turn to face them and because this show is fucking BRILLIANT and is never afraid to lean into its absurdity, Spooner says, and I quote, “Is that memory looking at us funny?” 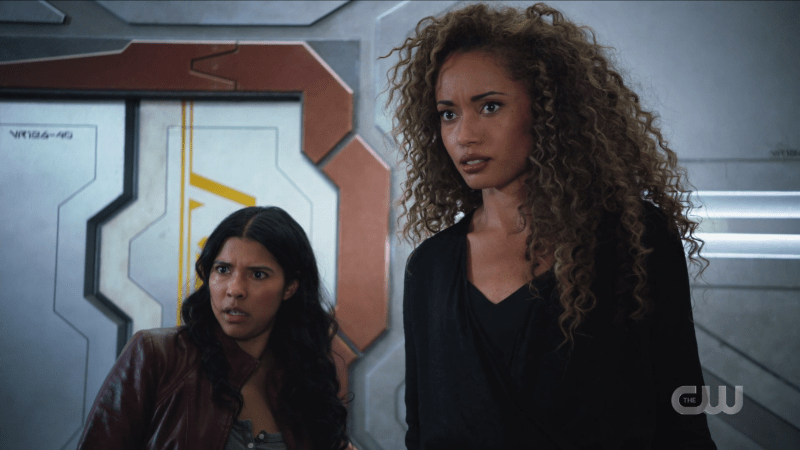 And the truth is, yes, that memory was, indeed, looking at them funny.

They realize something is amiss so they have Jax jump them back, and just before they get attacked. British Jax tells them that Gideon’s memories are being corrupted; she’s running out of time.